The five artists who contributed to Eastern Mennonite University’s Centennial art installation offered new perspectives — 500 of them — on the theme “Serving, Leading, Transforming.” 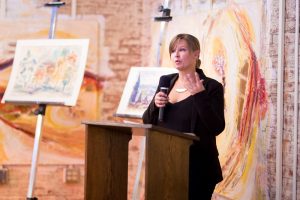 At the opening reception, Centennial Committee chair Louise Hostetter ‘79 welcomed two honored guests. Professor Emerita Margaret Martin Gehman was the university’s first female graduate to earn a doctorate — in art education in 1962. Esther Augsburger was the college’s first graduate with an art degree, and became an advocate for the arts at EMU and for Christian art worldwide. The campus features two of her installations: Guns into Plowshares, recently relocated to EMU from Washington D.C., and Love Essence, near the seminary.

In her thanks to the committee for including the arts in the weekend, curator Ashley Sauder Miller ‘03 noted how artists embody EMU’s “Serving, Leading, Transforming” Centennial theme.

“The artist is a servant, silently showing up,” she said. “We lead through vision.” Artists are transformed by creating works that transform others, too, she said, by helping them “see things in a different way.”

Read more about each artist here. 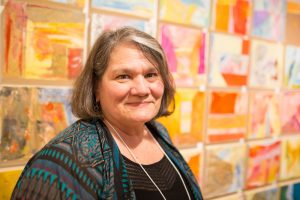 The artists — Barbara Gautcher, Rachel Herr ‘04, Zachary Nafziger ‘01, and Melinda Steffy ‘03, along with Miller— each selected a specific focus to express in a unique medium.

When creating her abstract collage paintings for “Through the Window,” Gautcher, an art teacher for 32 years at EMS and EMU, thought of the past century of people who, while “studying, writing, praying and daydreaming,” looked through windows on campus for “a view into the landscape, a vicarious peek at people passing by, and a vision into the future.”

Herr’s contribution began with a photograph of a female friend who she thought embodies “today’s deeply Mennonite, modern woman.” Herr then reproduced parts of that photograph onto 96 of her 100 squares as a reflection on change in women’s roles in the Mennonite church. (She invited other photographers to fill remaining four squares.) 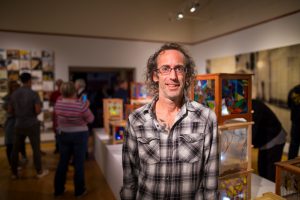 In the process of creating the project, she realized that women from across the spectrum of Mennonite diversity are all “trying to figure out what we’ll do in the same way as our ancestors, and what we will do differently. We’re each making our way.”

Miller used mixed media — from paints to graphite to embroidery floss to donated materials from EMU’s facilities management, and more — to image chairs on campus or shown in historic photos.

In his Tiffany-style stained-glass panels housed in four-sided wooden frames, Nafziger expressed “ideas of tradition, history, location, connections to each other and Earth,” he said — “the light and love of culture and humanity that can be found as the basis for EMU’s core values and ethics.”

He decided to make his works into lamps because, he said, “Mennonites love things to have purpose.” 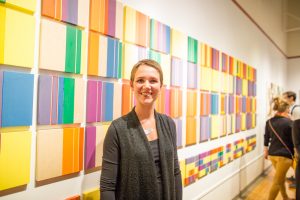 Steffy’s 100 paintings of color reinterpretations of “Praise God from whom” — widely known as the “Mennonite anthem,” or simply by its number in the old (606) or new hymnal (118) — portrayed a “four-part worldview” that “embraces diversity, listens to and draws out marginalized voices, and acknowledges that no single part holds all the answers.”

Four-part church singing is less about being perfect than about being present and participating, Steffy said, and following the opening ceremony, she led exhibit attendees gathered around her paintings in singing the hymn. 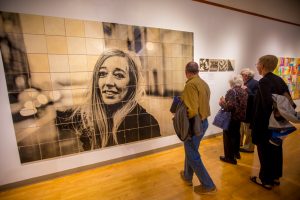 Steffy’s work — specifically her inclusion of imperfection — left at least one visitor “in awe.”  Valerie Lane, who with her husband Darren was on campus visiting their daughter Michaela, a first-year student in the visual and communication arts program, said finding EMU was a “God thing.” The arts education at EMU, she said, is broader than would be offered at a traditional art school.

Augsburger said that each artist in the exhibit “is different from the others. Each one is very creative. They bring a lot of energy.”

The exhibit was “a rich display of depth of personalities and expressions of gratitude for the heritage and experiences received here at EMU,” said Evon Bergey ‘79, a member of the board of trustees. Herr’s work, she noted, points out “the impact that strong women have had on the university and on the larger human experience.”

Twenty percent of sales from the exhibit were donated to the EMU arts program.