A display of Funkadelic donuts, "guaranteed to rock your soul," makes decisions difficult for customers at Peace, Love and Little Donuts, owned by Eastern Mennonite University alumni Matt Hershey ’15, Kaitlyn Troyer ‘15 and her brother Cody Troyer ’13. Donuts are made, and decorated, fresh for customers at Harrisonburg's newest donut shop. (Photos by Andrew Strack)

“You can say a lot with a donut,” says Judy Miller, waiting at the counter of Peace, Love and Little Donuts in Harrisonburg.

Co-owners Matt Hershey ’15 and Cody Troyer ’13 watch while Kaitlyn Troyer ’15, the most artistically inclined of the trio, decorates a dozen fresh donuts with various glazes and toppings. 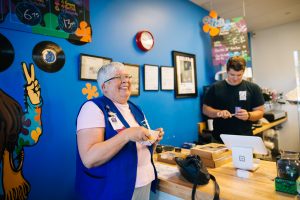 Judy Miller, wearing her volunteer vest, stops in for three dozen Peace Love and Little Donuts treats to take to the hospital staff.

“I put my heart into it,” she says sincerely, scrutinizing her work as the chocolate glaze hardens under crushed cookies.

Up to 60 scrumptious combinations can be made, from Groovy (plain, sugared, powdered or glazed) to Far-Out (choose from nine kinds of frosting) to Funkadelic (just as it is described, “guaranteed to rock your soul”).

Miller, a volunteer at RMH Sentara, is taking this dozen donuts to the doctors and nurses of outpatient services. Since discovering Harrisonburg’s newest donut shop, she’s become a regular. In the past few weeks, she’s taken six dozen donuts to the Rockingham County Sheriff’s Department and another dozen to other volunteers.

“People love them. It’s a really simple, nice way to say thank you,” Miller says, adding that she and her husband stop by for their own date night and their granddaughter considers a visit to Peace, Love and Little Donuts to be a great treat.

Hershey, behind the counter, is beaming from the good customer review. He hands her a punch card (“Feed your inner hippie!” it says), so Miller work her way towards a free “disco dozen.”

Popular from the first day 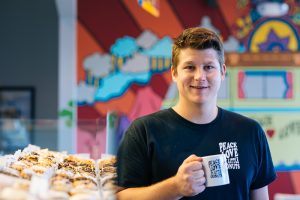 Peace, Love and Little Donuts opened on Port Republic Road in February 2017 to wide acclaim, multiple Instagram posts and local television coverage. Close to James Madison University, the shop sold nearly 1,000 doughnuts its first day of business and business hasn’t tailed off since. [The donuts have made numerous appearances at EMU events; one week, the infamous slim brown boxes with the cellophane window showing nestled confections was witnessed at different campus locations — and yes, shamefully, opened — on at least three separate occasions by this writer.]

The shop is busy in the mid-morning, with people stopping for a quick snack and to pick up donuts to take to work or families coming in for a summer-time activity. The end of the lunch hour and a mid-afternoon snack are also popular. And then in the evenings, Hershey says. “We get lots of couples coming in for a sweet treat. The donuts are almost like a dessert.”

“They’re actually kind of like a cupcake,” Kaitlyn Troyer says.

The key, says Cody Troyer, is how fresh the donut is: “None are more than five or 10 minutes out of the frier.” Add to that a wide array of flavors, like Samoa (after the Girl Scout cookie), Oreo cheesecake and cinnamon cougar crunch, and everyone is bound to find a favorite. 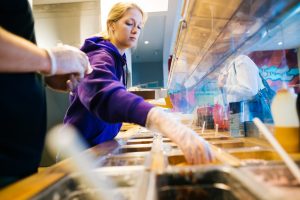 Kaitlyn Troyer ’15 dunks a donut in glaze while a customer waits.

The business partners bring diverse skills. Hershey has a degree in peacebuilding and development, with minors in business and Bible and religion. Kaitlyn has a degree in history, and Cody, who graduated as a digital communications degree, splits his time as a freelancer and in a part-time position as a videographer at James Madison University.

The Troyer siblings’ father was the person who suggested opening a Peace, Love and Little Donuts franchise in Harrisonburg. The trio then visited a store in Pennsylvania, liked what they saw and agreed that the Shenandoah Valley, with its three universities and tourism, would also “dig” the ‘70s theme, as well as the tasty goods.

While laying the groundwork to start the business, Hershey said they drew on experience and expertise of a wide group of people, including business instructor Andrew Miller. “It’s actually brought us a lot closer to our families because we’ve needed support and guidance through this process.”

Besides the ‘70s-funky mural painted on the wall by Stephanie Toth ‘16 and the EMU graduates who might be taking orders or topping donuts, there’s one other important Mennonite influence that Hershey hopes will help bring in the morning crowd.

The shop serves coffee from One Village Coffee, a Souderton, Pennsylvania-based roaster. Beans are fair trade and USDA organic approved.

After Hershey serves three cups to a take-out customer, he points out that she’s a new regular. 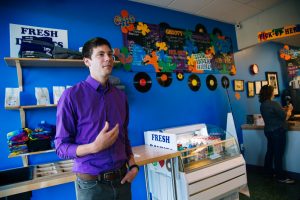 Cody Troyer ’15 in front of the menu, which offers three kinds of donuts in escalating degrees of decadence, from the plain-Jane Groovy to Funkadelic.

“It’s been really fun to see how diverse Harrisonburg is, and to become more a part of the community here,” Hershey said. “We meet new people every day and that’s been one of the best parts of opening this business. It’s been a lot of hard work, but getting to know the community has been great.”

One favorite customer is President Emeritus Loren Swartzendruber (his favorite donut is the “tree hugger”).

The fun vibe is apparent from the photos on the “PLLD” Facebook page, which shows happy donut-eaters, some of whom pose with the “The Donut Dude,” a life-size cutout of a long-haired hippie wearing floral gear, a leather vest, beads and a headband.

Of course, this is all the more fun because Hershey’s degree is in peacebuilding development and how better, he says, to build peace than little donuts?