Dan Bowman plays the piano in his Harrisonburg, Virginia, home. The 76-year-old started Daniel L. Bowman Piano Tuning and Service — his own business — in 1981, and tuned pianos in Harrisonburg full time until he retired in 2015. (Photos by Nikki Fox)

Dan Bowman, featured in this July 1, 2017 Daily News-Record article, earned a social work degree from Eastern Mennonite University in 1965. His wife, Ferne Lapp Bowman, is a 1964 graduate with a degree in education. Dan Bowman is the subject of a documentary by James Madison University professor Mike Grundmann and Shaun Wright.

“As a blind person, I do not think of myself as living in the dark,” said Dan Bowman, who’s operating a table saw in the opening scene of “A Good Blinder,” a documentary following his life.

“I make sure I have butterflies when I reach for the power switch,” he said.

Bowman, 76, began losing his eyesight at the age of 12 due to a detached retina. But his lack of vision hasn’t stopped him from pursuing his interests in mechanics, woodworking and piano tuning, as well as his fascination with philosophy, the cosmos and life’s greatest mysteries.

“He’s interested in everything,” his wife, Ferne Bowman, 83, said. “A lot of it right now is astronomy.” 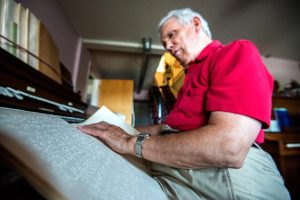 Bowman reads Braille, which he learned as a student at Virginia School for the Deaf and Blind.

Bowman’s interests are what got James Madison University associate professor Mike Grundmann and his colleague, Shaun Wright, interested in capturing the daily life of this so-called “Renaissance man.” The documentary follows Bowman from working in his wood shop, to tuning pianos for customers to just changing a light bulb.

It took two years for Grundmann and Wright to make the film, with shooting during the summers. The filmmakers had 30 hours of content to fit into just under 30 minutes. Grundmann found Bowman through a colleague who was a customer of Bowman’s piano tuning service. He was looking for a subject that was novel, and he hopes viewers will be inspired by Bowman’s story.

“I think No. 1 it’s to give the viewers an experience of Dan,” Grundmann said. “Dan as a whole person, because he’s very interesting as a whole person.” Bowman has lived his life fairly independent, learning how to be blind and navigate the world in special ways. “He’s got the ideal attitude in life,” Grundmann said. “I get the sense that Dan accepts it as a creative challenge. He’s made so many creative adaptations. … He’s really good at analyzing a situation and coming up with solutions.”

Bowman grew up on a Mennonite farm in Harrisonburg as one of nine children. He was born cross-eyed and very near sighted. He and his brother, Eldon, had a passion for tinkering around with tools since he was around 8 years old. The farm had lots of scraps of wood and tools lying around. Bowman remembers one of his first projects was building a cart from four cast iron wheels with his brother.

“We just started hammering, sawing and banging stuff together, and the next thing you know, we were making a few things,” he said.

Starting at 12, he lost his reading vision, but still had mobility vision. He lost total vision by the age of 14.

Bowman is grateful that he made the most out of his seeing years by pouring over books, magazines, maps and photos.

“It has come clear to me that, in those first 12 years, I made really good use of the vision I had,” Bowman said. “Not knowing what I was doing, I was quite literally storing up a huge amount of visual memories.”

While there were disappointments in losing his vision, Bowman said he soon caught on that it was fun to show off to people what he could accomplish without vision. “I can write faster on here than you can on a regular typewriter,” Bowman said in the documentary as he’s typing braille onto note cards.

Bowman attended the Virginia School for the Deaf and Blind in Staunton, graduating in 1961. He attended college at Eastern Mennonite University and later the Richmond Professional Institute, now known as Virginia Commonwealth University, for his master’s degree. He also attended seminary at EMU.

He married Ferne and they moved to Harrisburg, Pa., where Bowman worked his first job as a vocational rehabilitation counselor for blind clients for nine years. The couple then moved back to Harrisonburg. Bowman raised three daughters with his wife. His daughter, Diane Bowman, inherited the near sightedness as well as the detached retina. By that time, medical technology had advanced so that her vision was saved.

Using a long cane, Bowman was able to confidently walk the streets by himself until he got hit by car in 1969 while living in Pennsylvania. He walked two blocks from his house to get dinner, and as he approached the intersection, he stopped and listened for traffic, as he normally would. He didn’t hear anything. But a car was coasting down the street idling as the driver was looking for an address, looking away from Bowman’s direction.

He didn’t break any bones, but the incident did shake him up a bit. “After that incident, I guess my enthusiasm to just get out and do joy walking went down a good bit,” he said. “I did continue going places and doing things as a independent blind person, but the sheer joy of moving about was dampened down.”

Bowman learned piano tuning skills while attending the Virginia School for the Deaf and Blind, so as an adult, he tuned pianos on the side for a little pocket money. He then started Daniel L. Bowman Piano Tuning and Service — his own business — in 1981, and tuned pianos in Harrisonburg full time until he retired in 2015.

He had largely quit woodworking during his young adult life while he was in school, but he started buying tools and equipment years later after receiving encouragement from Ferne, who saw his talent. How he is able to safely use saws and other power tools is a bit hard for him to explain without demonstrating, but he said, “there are ways of doing things without sight. You find ways of measuring, you find ways of handling your power tools safely.”

In the documentary, you see Bowman cut his finger, but incidents such as those don’t happen often. Grundmann called Bowman “an amazing craftsman.” Bowman has the ability to tell whether a piece of wood is pine, spruce poplar or any other type just by feeling it. Over the years, he has made everything from toys to tables and cabinets, to a swing, a birdhouse and even the shed in his backyard.

A late Victorian wash stand he crafted for the annual Mennonite Relief Sale auctioned for $1,000 one year, and his marble roller sold for $3,700.

As a student at the Virginia School for the Deaf and Blind, Bowman was told in the late 1950s that 80 percent of blind people remained unemployed. Bowman, on the other hand, worked his entire life to support a family.

“The fact that I came up through and was able to support a family and live independently … that means something,” he said. “I did very well and I can say that without undue pride.”

“A Good Blinder” has already won “Best in Competition” in the documentary category for the Broadcast Education Association’s Festival of Media Arts. The film has also been chosen to screen at the International Disability Film Festival in Brazil. Locally, the film was shown at Court Square Theater earlier this year and will be screened again on WVPT Public Media on July 6 at 8:30 p.m.

Story By Shelby Mertens/Daily News-Record Posted on July 7, 2017
Share
100 Years of the Arts at EMU »
« Mennonite Church USA convention draws many to Orlando