Anxo Perez '97, inspirational speaker, author and entrepreneur, is Eastern Mennonite University's 2017 Alumnus of the Year. Perez, who lives in Madrid, Spain, graduated in 1997 with a bachelor’s in liberal arts with minors in music and English as a second language. (Courtesy photo)

In his native Spain and beyond, Anxo Perez  ’97 has become an inspirational speaker and author. His message: “Don’t admire success, admire effort.”

Eastern Mennonite University has named Perez its 2017 Alumnus of the Year for accomplishments in his profession. He graduated in 1997 with a bachelor’s degree in liberal arts with minors in music and English as a second language.

Perez will accept the award at the 2017 Homecoming and Family Weekend, where he will also be among three alumni to present at EMU TenTalks. Returning for its second year, EMU TenTalks features speakers presenting for 10 minutes, followed by a question and answer session. The format should easy for Perez, who will be the first alumnus to have given a TEDTalk.

Watch Anxo Perez ’97 give a TEDTalk on the 8Belts knowledge acquisition method.

Perez founded and runs 8Belts.com, an internet-based language-learning program centered upon oral repetition of frequently used words and periodic conversations with native speakers, rather than grammar and theory. The method promises money back if the user is unable to manage, after eight months of 30 minutes’ daily practice, everyday exchanges. The company employs more than a hundred people in nine countries and boasts customers in 50 countries. Perez, a Madrid resident, is fluent in nine languages. 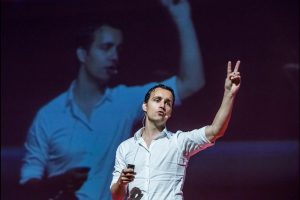 He also authored Los 88 peldaños del éxito (The 88 Steps of Success), based on tenets to improve the world through personal growth. The 2014 title and the follow-up La inteligencia del éxito (The Intelligence of Success) have rung up U.S. $3 million in sales. Los 88 peldaños charted in as the No. 1 nonfiction bestseller list of ABC, one of Spain’s three largest dailies, in July 2014, and ranked high in iTunes sales through the end of that year. Perez dedicated a portion of royalties to charity.

A popular speaker, Perez has given some 400 keynoters on five continents. One of those took place in Ohio in May 2016, when Perez received a distinguished alumni award and addressed the graduating class of Bellefontaine (Ohio) High School, where he had been an exchange student in 1993. He likened the world’s view of success to a swan. Observers focus on the swan’s elegant plumage and graceful profile and overlook what’s unseen—the legs paddling energetically below the surface.

Perez attended his senior year at Bellefontaine High. His soccer coach there, Ken Shank ’83, played an unexpected role in Perez’s attending EMU. Shank had driven Perez to visit a Virginia college Shank thought might offer Perez a soccer scholarship. Afterwards they decided, spur of the moment, to go on to Harrisonburg, not to see EMU but to visit Shank’s parents. “The very first minute I saw the campus I knew that was where I wanted to go,” Perez recalled. He passed up an “almost full-ride” soccer scholarship to attend EMU.

Perez played on EMU’s varsity soccer team from his freshman through his junior years. One of his best memories, he said, was scoring three goals—tying the record at that time for most goals in a game—in the 1995 homecoming game. Not only was Shank there from Ohio to see it, but the third goal was also the bicycle kick, a complex move and “the dream goal of every soccer player,” Perez said.

Although gifted linguistically and musically—he played piano from age 5 and recently released a song album titled “Muy Happy Happy” that he composed, played and sang—Perez had difficulty choosing a profession. Helen Nafziger in EMU’s Career Services helped set his direction. “I was such a difficult ‘client,’” Perez recalled. “I was so lost. She would give me such great suggestions for my career and I’d say no to everything. I don’t know what I thought I could possibly achieve but everything seemed insufficient. She was so patient. She was the person who suggested I speak with the police department to work as an interpreter.”

In his sophomore year, Perez worked part time with the Harrisonburg police to interpret for its Spanish-speaking population. This led to a position teaching legal interpretation at James Madison University in Harrisonburg after his EMU graduation.

No one can fault Perez for a lack of chutzpah. Following an EMU spring break trip to Georgia, Perez returned to volunteer in the summer and asked the music minister of a Baptist church there to teach him about gospel music. Later, back in Harrisonburg, Perez saw an ad that Bethel African Methodist Episcopal Church was seeking a music minister. He applied.

“The pastor looked at me and jokingly said, ‘Not only are you not black, you aren’t even American,’” Perez recalled. At the piano Perez played a “really jazzed-up” version of “When the Saints Go Marching In.”

“Brother, you’ve got the job,” the pastor told him.

“I’m probably the first Spaniard to lead a gospel choir in the States,” Perez said. Besides playing piano, he led the choir in singing all parts of four-part harmonies.

Upon his return to Europe, Perez earned a master’s in international relations at the Brussels campus of the University of Kent. He lived in China for a period, where he began to think through the language-acquisition techniques upon which he based his 8Belts curriculum.

When he founded 8Belts, Pérez said, he pledged himself to charitable giving, a practice less common in Spain than in the United States. He contributes to several nonprofits, including Fundación Iter in Madrid, which provides occupational training to high-school dropouts; and heArtS China, concerned with orphans and developmentally disabled persons. He also donates to a Madrid-based foundation devoted to cancer research and prevention.

Pérez has been honored with several awards. In 2014, he received a “European Citizen” award from Foro Europea 2001, a discussion forum on Europe begun in 1996 that works to exchange and disseminate ideas and knowledge among business, cultural and political leaders. In 2015, Perez was among a dozen Spaniards given entrepreneurship awards by the magazine Emprendedores. His was for “the entrepreneur whose trajectory has been especially outstanding in recent months.”

Story By Emily Wade Will Posted on June 27, 2017
Share
Called to nursing as his second career, Michael Sumner ’15 earns awards for compassionate care and research »
« The Steel Wheels — with deep EMU roots — to headline Centennial festivities