Rachel Wyse is a freelance art designer with Facebook in New York City. After graduating from Eastern Mennonite University in 2010, she held a range of jobs that helped her determine her strengths and the work environment in which she could excel. She graduated from VCU's prestigious BrandCenter in 2016. (Photo illustration courtesy of Rachel Wyse)

A typical day for freelance art director Rachel Wyse ’10 starts with a subway ride to the office in Lower Manhattan, New York City. After grabbing breakfast from the café and checking e-mails, she jumps into the daily blend of meetings and design projects. 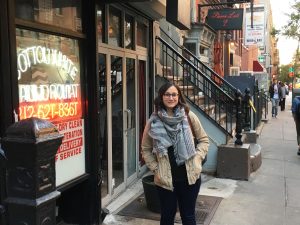 Rachel Wyse in New York City, where she works as a freelance art designer at Facebook. (Courtesy photo)

Wyse works in Facebook’s Creative Shop, one of nearly 13,000 employees contributing to the social media world of 1.5 billion users worldwide. With its innovative collaborative atmosphere that shuns offices and encourages co-workers to bond over ping-pong, lattes and impromptu music sessions, Facebook is widely known as one of the best companies to work for in the tech industry.

Wyse’s new job is a result of an education, she says, from Hesston College to Eastern Mennonite University and then graduate school at Virginia Commonwealth University’s prestigious BrandCenter that nurtured creative talents and encouraged her to learn, experiment and most importantly, fail. A series of different jobs as she discerned her career path helped her hone in on what kind of work she preferred, and the atmosphere in which she would thrive.

Raised in Indiana by parents who made tandem bikes and wall-hangings, Wyse discovered her creative side early. “The idea that I could create or design or build something unique stuck with me, and art classes seemed to be the place where I could experiment with that the most,” said Wyse.

Like many first-year students, Wyse had no set career path when she enrolled at Hesston. She knew only that her future job would engage her creatively in some way. At EMU, as a visual and communication arts major, she learned photography, Photoshop, videography and animation —all skills she has used since and in her current position. 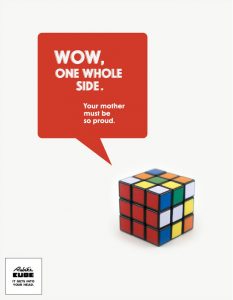 After graduation, Wyse spent a few years in various jobs, including as an admissions counselor at Hesston College. She then married and moved to Charlottesville, Virginia, where she worked in a gift shop and did small freelancing jobs for a local magazine and a custom stationery artist. Eventually she became a full-time graphic designer for a company that made online business simulations. Wyse created promotional pamphlets, mailers and printed pieces.

“Those years were pivotal for me, as I was figuring out what I liked and didn’t like in my work,” said Wyse. “Even after graduating and having a few jobs in graphic design, I struggled with what my path would be. Eventually I realized I wanted to work on larger scale projects that had a lot of brains behind them.”

Her career path became more focused when she was accepted to VCU’s Brandcenter.

Wyse says it’s nearly impossible to be completely prepared for the rigorous program, in which students are challenged to think in a completely different way. “The program is designed to break down and rebuild the way you think and problem solve, so you get really used to failing and messing up,” said Wyse. She added that the constructive feedback she received was what educated her most.

At the BrandCenter, she created mock campaigns for a variety of brands, including Benihana, Rubik’s Cube and MegaMillions. The campaigns, created in collaboration with other students, are often quirky and funny and run the gamut of media, including print ads, social media engagement, interactive videos, t-shirts and other consumer items.

It was shortly after graduating that she began working with Facebook.

Department chair Steven Johnson says he wasn’t surprised to learn of Wyse’s success. “As a student, Rachel exemplified the kind of cross-disciplinary thinking we encourage in the Visual and Communication Arts program at EMU. In conversation with her other coursework, her media images displayed not only technical accomplishment but psychological depth. It’s not surprising that her integrative skills have been recognized in grad school and beyond.”

‘Push the boundaries of knowledge’ 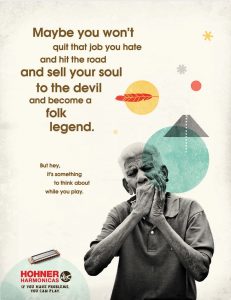 An ad for Hohner Harmonicas, one sample among Rachel Wyse’s portfolio. To view more of her work (and wit), visit www.rachelwyse.com

Wyse says undergraduates, whether VaCA majors or in some other program, should push the boundaries of knowledge and do so without fear of failure.

She explains that looking into other branches of art, or even entirely different fields of study, expands creativity and puts students outside their comfort zones. “That’s the beauty of a liberal arts school,” she says. “You have so many opportunities to try different things: take advantage of it.”

As for finding your life’s work, her best advice is to be patient and follow your instincts.

“Finding a good-fitting job is such a personal thing,” she says. “I think the best piece of advice, as cheesy as it sounds, is be true to yourself. As you meet with people and talk about your work or experiences, you’ll know when an opportunity feels right. If it doesn’t feel interesting or there aren’t good vibes, don’t pursue it.”