Fabrice Guerrier MA '15, who works in the Bureau of Western Hemisphere Affairs of U.S. State Department, and Jodie Geddes MA '16, restorative justice practitioner, have joined the leadership of Coming To The Table, an affiliate organization of the Center for Justice and Peacebuilding at Eastern Mennonite University. Guerrier is president and Geddes vice president. The alumni helped to start the Shenandoah Valley Local chapter while in Harrisonburg. (Photo by Howard Zehr (left) and courtesy of Jodie Geddes)

Fabrice Guerrier and Jodie Geddes, alumni of Eastern Mennonite University’s Center for Justice and Peacebuilding, have been elected to two-year terms on the board of managers with affiliate organization Coming To The Table (CTTT).

Guerrier, who works in the U.S. State Department in Washington D.C., and Geddes, a community organizing coordinator with Restorative Justice for Oakland Youth (RJOY) in California, are serving as president and vice president, respectively.

“What comes to mind, first and foremost, about these two leaders is their youth and enthusiasm and commitment to truth, justice, mercy and peace,” said CTTT Executive Director Tom DeWolf. “Both Jodie and Fabrice bring a wealth of peacebuilding knowledge to this work from their education at CJP, but also life and professional experience.”

Coming To The Table “provides leadership, resources and a supportive environment for all who wish to acknowledge and heal wounds from racism that is rooted in the United States’ history of slavery,” according to their website. In 2016, CTTT held their Tenth Anniversary National Gathering at EMU, bringing together more than 90 people from around the United States.

With growing national attention on the need for racial healing, the organization has 18 groups in seven states and Washington D.C., including a multi-state Mid-Atlantic group. Six new chapters have recently been added. 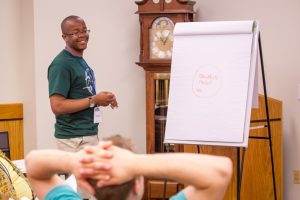 Fabrice Guerrier at EMU in 2015. (Photo by Michael Sheeler)

Fabrice Guerrier, a native of Haiti and 2015 graduate of CJP, has been involved with CTTT since hearing board president Phoebe Kilby GC ’04, a white woman, share the story of connecting with her cousin, Betty Kilby Baldwin, an African-American woman descended from slaves owned by Phoebe Kilby’s family.

Guerrier felt an instant connection to their story: he had grown up trying to understand the political and social legacies of slavery within his Haitian homeland, where former African slaves and free-colored men and women had risen against the French colonial empire in Saint Domingue to create the first independent black nation where all people, of all colors, were granted freedom and full citizenship.

With the knowledge that “the legacies of the transatlantic slave trade continue to impact billions of people around the world in many nations,” Guerrier helped found a Shenandoah Valley Local chapter of CTTT in 2014.

When I heard of descendants of the enslaved and enslavers connected through slavery coming together to dialogue around the difficult issues of race and healing and address the legacies of slavery in the United States, it struck me as this revolutionary idea that can truly save the soul of America … CTTT shows us that as a nation, our futures and our lives are inextricably bonded together. That history and its inter-generational wounds deeply affect the lives of many, whether we choose to recognize it or deny the moral responsibility we each carry set by those who came before us. I truly believe that when people begin to engage in deep dialogue, we start to unpeel the many layers that divide us from each other. This important process calls for moral imagination and a healthy dose of realism.

Guerrier points to CTTT’s partnership with the Kellogg Foundation’s National Truth, Racial Healing, and Transformation enterprise as one sign that the growing organization and its members, with work rooted in concepts of trauma awareness and resilience and restorative justice, are contributing to a larger national conversation. [CJP is also a partner. Read more here.]

CTTT’s shared vision for the future includes engaging youth, creating inter-generational spaces and collaborating across churches, colleges and cities. “We are at a critical point in America where people are hungry for something different,” Guerrier says. “I believe Coming to the Table can be this difference and allow individuals to self-organize, get the leadership and knowledge to engage their communities and begin to heal themselves and their communities.” 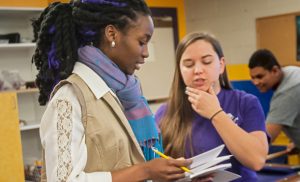 Jodie Geddes (left) while at EMU in January 2015, working with Allison Crenshaw, unit director at the Blue Streak Teen Center at the Harrisonburg Boys and Girls Club.
(Daily News-Record/Daniel Lin)

Geddes says her friendship with Guerrier while both were graduate students had a lot to do with her eventual membership in  CTTT, but the process wasn’t as smooth. New to CJP and to the Harrisonburg community, with the death of Tamir Rice weighing heavily, she recalls being alternately led by the call to organize in the community and pulled by “my resistance to be in the space with white folks speaking about race.”

Confronting her own resistance is a familiar dynamic for Geddes, who was born in Jamaica and raised in The Bronx, New York, struggling, she says, with “a different kind of double-consciousness.”

As a Caribbean American, many things around sent the message that I was different from ‘African Americans.’ As I grew older and my accent began to change, the world of privilege saw me as ‘another black girl from the hood.’  My humanity is dependent on serving as a vessel to transform and heal from the wounds of slavery that encourage in some ways a reality of ‘Nobodyness’ as Marc Lamont Hill puts it … The history of slavery in the United States is deeply connected to the Caribbean. On multiple levels the Caribbean set the roadmap for how American slavery would function and the legacy we have today.

Noting that the work of CTTT is “collective” in nature, Geddes also points out that the leadership role is “an opportunity as young people for us to support the expansion of CTTT’s mission through an intergenerational lens to decolonize language and structures that be.”

She hopes for a broader establishment of CTTT chapters among more youth, on college campuses, in the Midwest and “across the world.” 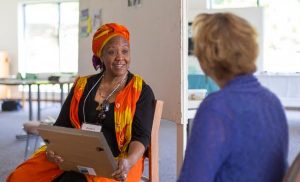 Participants in Coming To The Table’s tenth anniversary national gathering in June 2016 on the EMU campus. (Photo by Andrew Strack)

“If I am really dreaming big,” says the 2016 graduate, “I hope to see a national truth and reconciliation process. Many people can do the work of uncovering history, making connections and telling the truth but transformation requires a different kind of action that dismantles and helps to reshape a new nation.”

She’s working to make that dream come true: RJOY is led by executive director Fania Davis, a strong proponent and activist for a national process for racial healing and transformation. [Read more about Davis’s partnership with CJP.]

With RJOY and CJP graduate students, Geddes is also involved in the first phase of a project to research and map various truth-telling, racial healing, reparations and/or memorialization initiatives around the country. The goal is to encourage synergy and cross-pollination of these initiatives, as well as publicize their ongoing work.