Chris Longenecker '01, a cardiologist and assistant professor of medicine at Case Western Reserve University, found a niche as a cardiologist who specializes in HIV and the effects of long-term inflammation. Inspired by his physician father and a grandfather who always wanted to be a missionary doctor, Longenecker came to Eastern Mennonite University certain he wanted to pursue medicine and interested in working in Africa — he has achieved both goals. (Photos by Jon Styer)

How does a doctor decide on a medical specialty? Dr. Chris Longenecker ’01 can recount a family history in the medical profession, fluency in French, and a trip to southern Africa at the height of the AIDS epidemic as three conjoining strands that led him to his current research interest of cardiovascular complications of HIV/AIDS.

Longenecker, a cardiologist and assistant professor of medicine at Case Western Reserve University, will present a Suter Science Seminar about “Inflammation and Heart Disease in Patients with HIV Infection: Mechanisms of Disease and Possible Solutions for a Global Epidemic” Saturday, Oct. 15, during Eastern Mennonite University’s Homecoming and Family Weekend. The hour-long lecture begins at 9:30 a.m. 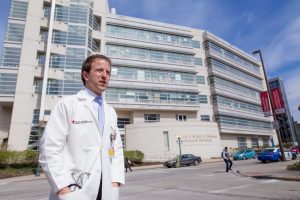 Nearly 37 million people are living with HIV/AIDS worldwide, the vast majority in developing countries. Although most live longer because of antiretroviral drugs, these patients suffer higher rates of heart disease and other disabling conditions because of chronic inflammation.

Longenecker is involved in more than a dozen research projects to explore the mechanisms of cardiovascular disease in HIV/AIDS patients in both the Cleveland, Ohio, area and in Uganda. Of the 2,500 AIDS patients in the Cleveland area, approximately 1,200 seek treatment at University Hospitals Cleveland Medical Center, where Longenecker provides cardiovascular care and recruits patients for clinical trials. He travels to Uganda three to four times a year.

In addition to studying mechanisms of disease, Longenecker is also focused on strengthening health systems through population-based research. One ongoing project funded by Medtronic Foundation has implications for public health in developing countries. As one paper published by Longenecker and his colleagues summarizes, “data suggests that cardiometabolic diseases will become a major health problem in sub-Saharan Africa, competing with infectious diseases for limited health resources.”

Because of influxes of foreign aid during the HIV/AIDS epidemic, however, strong systems are in place to provide HIV/AIDS treatment. “What we’re looking at is how to convert these very good systems of care to help the 93 percent of people who do not have HIV, but are dealing with other diseases that need to be treated,” Longenecker summarizes. 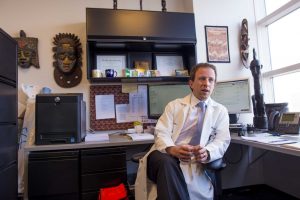 Influenced by both his father, physician Randall L. (Randy) Longenecker, and his grandfather, a pastor and farmer who had always wanted to be a missionary doctor, Longenecker decided early on that he would work in the medical field. EMU was a good choice because of family ties (mother Marla Hochstetler ’75 Longenecker is also an alumnus) and the strong pre-med program.

“Clearly, I had some idea that I wanted to do some sort of medical mission work, when I came to EMU,” he said, “but I didn’t know what form that would take.” He made progress towards that goal with a cross-cultural experience through the Brethren Colleges Abroad program. Longenecker attended Universite Nancy 2 in France “with the idea that I could work in West Africa.”

Ironically, Longenecker’s future work would focus on former British colonies in Africa, and so he has rarely had the opportunity to use his French language skills. As a medical student at Ohio State in 2003, he traveled to Swaziland, working in a United Nations AIDS clinic for a summer at the height of the HIV epidemic.

Longenecker completed his internal medicine residency at the University of California, San Francisco. Coming to Case Western Reserve University (CWRU) for a cardiology fellowship in 2009 because of their strong foundation in HIV/AIDS research, he began traveling to Uganda two years later with a small contingent of CWRU cardiologists engaged in a grant-funded collaboration with Ugandan medical schools. That collaboration, initially “aimed at raising awareness, improving the capacity for research and developing clinical careers in cardiovascular disease,” continues today.