Alumni Ingrid De Sanctis and Ted Swartz are co-writing a Centennial celebration theater piece that will be presented during Eastern Mennonite University's 2017 Homecoming and Family Weekend. The experienced performers and playwrights look forward to hearing from the EMU community about their experiences on the Harrisonburg campus and in Lancaster programs as well. (Courtesy photo)

Eastern Mennonite University alumni Ingrid De Sanctis ‘88 and Ted Swartz ’89, MACL ’92, have collaborated as professional playwrights, actors and directors for more than 20 years. The friends and professional colleagues have been commissioned to create a Centennial celebration piece, debuting during Homecoming 2017.

Moving, surprising, “an evening during which people will laugh and cry and reflect on how their EMU years forever shaped their lives,” says De Sanctis.

“I know it’s going to be funny,” Swartz adds. “It will tug at you a bit and you’ll be surprised by things you thought you’d forgotten. When you see a show with a group of people, you laugh for different reasons, because you’re delighted or surprised or you recognize yourself or something you have in common. We’re hoping all three of those things happen.”

To help build a cache of material, the playwrights hope that legions of EMU alumni will bombard them with memorable snippets and reflections to weave into a cohesive piece about their alma mater. Here’s their pitch:

When you think of your EMU experience – traditional residential undergrad, graduate, seminary, Lancaster, non-traditional student – what do you remember?

Think of the space you were in, whether it was the Shenandoah Valley; Lancaster, Pennsylvania; Washington D.C.; or in a cross-cultural setting near or far.

Think of buildings, dorms, the dining hall, the EMU hill. Consider Lehman Auditorium, the ‘80s era Bard’s Nest, the Discipleship Center, your orientation or graduation … what do you remember?

Consider the professors, coaches, residence hall directors or staff members who shaped and challenged your personal formation. What about a class, a lab, a project, or a paper that was particularly memorable?

Please share, in 100 words or less a moment, a memory (painful, poignant, uplifting, funny), a discovery that you have never forgotten about your time of transformation with Eastern Mennonite University/Eastern Mennonite College.

Submissions will be accepted through Dec. 1. 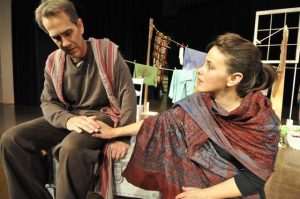 Ted Swartz and Ingrid De Sanctis, portraying Abraham and Hagar in a 2008 production of “Excellent Trouble,” will use anecdotes submitted by EMU alumni and community members to create their Centennial celebration theater performance. (Courtesy photo)

De Sanctis and Swartz, both Harrisonburg residents, have long trod the stages at EMU while making their own national and international reputations.

First with Lee Eshleman ’86 in Ted & Lee, and now with Ted & Company, Swartz has written and produced more than a dozen plays, traveling extensively worldwide for performances. His plays, always laced with a generous dose of humor, explore difficult topics such as faith and theology, family, mental illness and sexuality.

Louise Hostetter ’79, chair of the Centennial committee, said that when it came to selecting alumni to contribute an artistic production, the proposal of De Sanctis and Swartz was a natural and clear choice.

“We feel confident that their considerable connections to the university will enable them to create theater which will appeal to many while honoring EMU’s story of transformation, both past and into the future,” Hostetter said. “The arts have evolved over the past 100 years at EMU. A significant number of students have been impacted by theater and visual art opportunities – both as an extra-curricular activity and as part of their academic experience. Many have pursued professional careers in theater and the arts.”

“We’re looking forward to seeing what members of the EMU community share with us,” said DeSanctis. “By sharing your story, you’re giving permission to use it in any form in the drama. We’ll give all stories equal consideration for inclusion.”

EMU alumni who are working in theater and/or were significant in the formation of the arts at the university will join De Sanctis and Swartz in the performance. While no actors are named at present, Swartz says their goal is to create a troupe that includes “actors of each EMU generation.”

The Centennial theater production will be part of activities throughout the academic year 2017-18 marking EMU’s “Centennial: Serving, Leading, Transforming.”

During the week of Oct. 11-18, 2017, EMU and Eastern Mennonite School – which share their early history – will have joint and individual activities. The theater production will take place during the weekend of Oct. 13-15.