Centennial play by Swartz and DeSanctis, with troupe of alumni actors, delivers reflection and affirmation

The ensemble cast of "What we bring. What we take. What we leave." included, from left, Don Shenk, Tim Ruebke, Trina Trotter Nussbaum, playwrights Ted Swartz and Ingrid DeSanctis, Braydon Hoover, Helen Stoltzfus and Stan Swartz. The production also featured special guests and a choir of alumni and current students. (Photos by Macson McGuigan)

They’d wanted audiences to laugh, reflect, feel goosebumps, pause, celebrate and sing — and that’s exactly what happened at the two performances of What we bring. What we take. What we leave. in Lehman Auditorium during Eastern Mennonite University’s Centennial Homecoming and Family Weekend, Oct. 13-15, 2017.

The production, commissioned by EMU’s Centennial Committee and sponsored by Everence Financial, was a collage of stories of the experience of being a student at EMU written by Ingrid DeSanctis ‘88 and Ted Swartz ’89, MACL ’92. 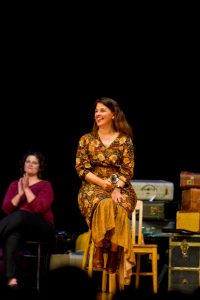 For this production, long-time collaborators Swartz and DeSanctis solicited memories from the EMU community and reflected on their own experiences, which they both say was foundational in their arts pursuits. “We have been keenly aware of how our time at [then] Eastern Mennonite College profoundly shaped our view of the world, life, and art,” program notes stated.

After watching the 90-minute production, Charlotte Wenger ’11 said that it re-affirmed her gratitude and appreciation for her experience and relationships gained at EMU, and gave her new insight into different eras of EMU’s history.

“The play struck a fantastic balance, with both funny and poignant scenes,” Wenger said. “There was something for everyone to connect with, so particularly during the scenes that covered aspects that weren’t as familiar to me, I loved hearing the responses and reactions of the rest of the audience.”

A representation of a committee meeting to draft guidelines for co-ed interactions elicited laughter as administrators expressed shock at prospects that students might “smooch — with vigor” and wrote rules for visitations and double dates. 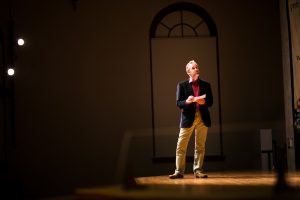 In another challenge, an off-stage Swartz impersonated the voices of various professors for contestants to identify. For the final impersonation, Swartz’s was replaced with the real voice of Landis, who then came onstage to continue reading lines from Shakespeare, to extended applause.

Not all scenes were humorous. The actors depicted times of conflict, of painful loss of friends and colleagues, and the institutional struggle inherent in developing from being a place of protection from the world to having its current engaged, global perspective. 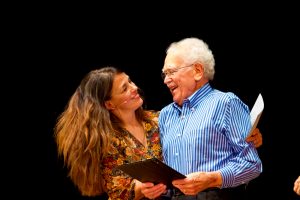 In one scene, a student back from a Middle East cross-cultural trip attempted to explain to her father conflicting emotions about the experience. “Do you wish you hadn’t gone?” her father asks. “No,” she says. “I’m glad I went.”

In one jarring juxtaposition, phrases of Micah 6:8 — “Do justice, love mercy and walk humbly with God” — were interjected with tragedies in the years since 1917, such as the Holocaust, the assassinations of President John F. Kennedy and Martin Luther King, Jr., various wars, and mass shootings as recent as Las Vegas this month.

A recurring motif was two people — one struggling with the climb and saying “I didn’t think it would be so hard,” the other exuberant at the view — mounting the hill overlooking campus: a mother and her son, a student enrolled in the school’s first full year, both excited but apprehensive about the start of college life; one student lamenting accreditation and other perceived indications of worldly influence on campus, and another excited about change; one student grappling with no longer wearing a prayer covering but being reminded by another that it’s just cloth; two students grappling with what it means to be peacebuilders after a sleepless night following the attacks of Sept. 11, 2001.

In closing scenes, actors remembered final classes, and the anticipation of graduating, leaving college to work overseas, hoping to return to EMU to teach, and more.