October 15, 1917, was the first day of classes at the new Eastern Mennonite School located in a rented hotel near Harrisonburg, Virginia.

One hundred years later to the day, the school — now known as Eastern Mennonite University — concluded a special Centennial Homecoming and Family Weekend with worship  in a near-capacity Lehman Auditorium.

“It’s so fitting that this gathering is a gathering for worship, prayer and singing, recognizing that it is only through the movement, guidance and call of God’s spirit that this institution has survived and in fact thrived,” said Jane Hoober Peifer ’75, MDiv ’98, who planned the service along with Les Horning ’86, MDiv ’98, and current director of admissions for Eastern Mennonite Seminary.

Members of Park View Mennonite Church swelled the congregation, their presence a symbol of historic unity. The congregation formed as part of the compulsory Sunday school and worship for students at the college, worshiping in the auditorium until 1968 when it moved to its current location on North College Avenue. 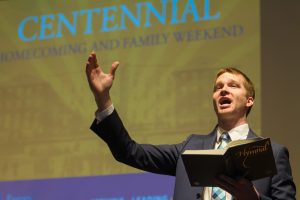 As late-comers squeezed into pews or trekked up to the balcony, Centennial historian Donald B. Kraybill ’67 spoke of the significance of the first hymn in the day’s program “Begin the Day with God,” sung daily by students in the school’s early years.

After several years of searching unsuccessfully for a site in the east for a new Mennonite school — in Newport News, Alexandria and other locations — L.J. Heatwole came home to Harrisonburg in the fall of 1915. Discouraged, but still holding out hope, he rallied several men at Weavers Mennonite Church to host a special Bible term in January 2016. Eventually, the group rented the Old White House in Assembly Park, where early in January, 35 students and a handful of faculty gathered. “Begin the Day with God” was the first hymn they sang.

John and Michelle Sharp offered the homily. Their son, known to most as M.J., was murdered in the Democratic Republic of the Congo while working with the United Nations, building relationships with warlords and persuading more than 1,600 armed rebels to lay down their weapons and leave the forest with their families for a new beginning.

The Sharps spoke of Christ’s posture of humility, an essential “emptying” so important to his mission. “Serving, listening and transforming requires a posture of humility, giving up all pursuit of status, arrogance and control,” John Sharp said. God who loves all humanity calls us to do the same, he continued. Fearfulness and suspicion of others we do not understand limits our access to God and God’s access to us.

Accompanied by photos of their son in Congo, the Sharps shared what they had learned since his death about their son’s unique way of serving, listening and transforming. They encouraged congregants to listen as M.J. listened — with humility and without judgement — wherever they serve, at home or in far away places such as the DRC. [Listen to a podcast of the Sharp’s chapel presentation on Friday, Oct. 13). 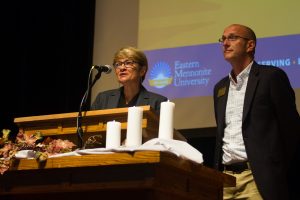 Following the homily, alumni award recipients joined together to share a reading of text from Isaiah 25 and Philippians 2.

The service and music, led by Benjamin Bergey ’11, was framed around selections from the following scripture:

Let each of you look not to your own interests but to the interests of others. Let the same mind be in you that was in Christ Jesus…who though he was in the form of God did not regard equality with God as something to be exploited, but emptied himself, taking the form of a slave, being born in human likeness. (Philippians 2: 4, 5)

And being found in human form, he humbled himself and became obedient to the point of death, even death on a cross. (Philippians 2:7b-8)

For it is God who is at work in you, enabling you both to will and to work for God’s good pleasure. (Philippians 2:13)