Marian Yoder Payne, with husband James, pictured in 2015. The couple have supported Eastern Mennonite University's Center for Justice and Peacebuilding since its founding in 1994. (EMU file photo)

Marian Yoder Payne, a founding donor of Eastern Mennonite University’s Center for Justice and Peacebuilding, died Sunday, Aug. 6, 2017. She and husband James, residents of Richmond, Virginia, helped to start the center and offered strategic gifts during the past 23 years. James is an alumnus of EMU, graduating in 1958 with a degree in education, while Marian took courses at EMU and completed her education degree at Penn State University.

CJP has 603 graduates working in 78 countries. Graduate degrees in conflict transformation and restorative justice are offered, as well as a graduate certificate.

Read more about the Paynes’ influence and commitment to peacebuilding through their support of CJP.

Thousands more have taken short-term courses through the center’s various programs, which include Summer Peacebuilding Institute, Strategies for Trauma Awareness and Resilience (STAR), the Women’s Peacebuilding Leadership Program, and the Zehr Institute for Restorative Justice.

Daryl Byler, CJP’s executive director, noted that Marian Payne’s spirit will live on through her generosity and the work of those she and James have supported.

“Just days before she died, Marian called to talk about how she and James could support the new scholarship fund CJP is creating for young women from the Middle East,” said Byler. “Her spirit always radiated generosity – whether imagining the next gift to CJP, encouraging friends and family on Facebook, or serving tea and cookies to guests in her home. The twinkle in her eyes constantly conveyed Marian’s deep love for life. We will miss her laughter, her kind words and her friendship. Thankfully, her generous spirit remains.”

From the Richmond Times-Dispatch 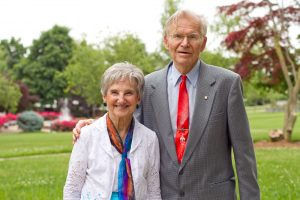 On Sunday, August 6, 2017, Marian Yoder Payne passed away peacefully in her home in Richmond, Va., one week shy of her 84th birthday. She was born to Saloma (Peachey) Yoder and Jacob P. Yoder in Belleville, Pennsylvania.

Marian and her loving husband, James, had just celebrated their 60th wedding anniversary on June 1, 2017.

Marian had a zest for life, and a gift for making people feel special and welcomed. James was very supportive of Marian as she returned to Penn State University to complete her B.S. in elementary education, graduating with distinction, while they raised their five grade school children. She taught third grade at J.W. Kline Elementary School, and completed two Masters of Education degrees in reading and in administration at Shippensburg State University. She then became the Shippensburg School District reading supervisor.

Born into a farmhouse without electricity, she embraced technology as it developed. She used the computer to make a yearly family calendar, and regularly followed her grandchildren and extended family on Facebook. She was often the first to comment on her grandchildren’s posts. She especially enjoyed connecting with former students on Facebook, who often thanked her for the impact she had on their lives.

Giving even in death, Marian donated her body to the Virginia State Anatomical Program. A Celebration of Life will be held at the Summerhill at Stony Point Retirement Community lodge on Saturday, Sept. 2, 2017 at 2 p.m.

In lieu of flowers, donations may be made to the Payne Family Endowed Scholarship at the Center for Justice and Peacebuilding, Eastern Mennonite University.