‘Circle letter sisters’ from the class of 1966 reunite at Homecoming

What to do when graduation fast approaches and your friends will disperse to Who Knows Where, possibly never to be heard from or seen again?

In today’s world, staying in touch is as easy as the touch of a screen or the push of a button, but in 1966, that certainly wasn’t the case.

That spring of 1966, eight Eastern Mennonite College seniors, all elementary education majors, decided to stay in touch with a circle letter. The women collected addresses, walked across the stage to collect their diplomas, and then headed into the world to begin teaching jobs.

Lois Moyer went as far as McGaheysville, where she taught that fall, and Peggy Halteman went to Staunton. But most of the others scattered farther away, to Pennsylvania and Ohio, even to Newfoundland. And the Circle Letter kept going … and going. 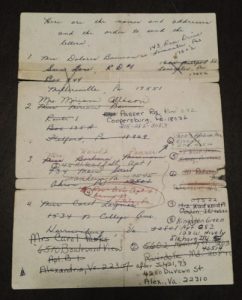 The address “book” that Dolores Bauman started upon graduation in 1966. It contained the orginal addresses of the eight circle letter participants, and then became a record of a lifetime of moves.

“Honestly, we never thought it was going to go on this long,” said Lois.

The Circle Letter has bound them in a sisterhood. In the course of 50 years, their communication covered the miles across seven states and four countries. In the ensuing years, the letters carried news of marriages, brief get-togethers, travels, the births of 16 children and then years later, the births of 25 grandchildren. The letters have helped the women support each other through life’s ups and downs.

“We’ve gone through a lot together,” said Miriam Bauman Allison. “We’ve hit things in our lives at the same time, like helping aging parents and then losing our parents. We’ve helped each other with depression and illness. It’s been a really wonderful connection and support system for all of us.”

On Oct. 13, the women met for only the third time since 1966 for dinner at the Thomas House in Dayton. The event coincided with their class reunion the next day at EMU’s Homecoming and Family Weekend.

Reading letters with a cup of tea

The dinner included lots of laughter and shared memories, including a lengthy discussion during which the group tried to pinpoint, through various clues, when and where they had held the first reunion (possibly in the 1970s, because Sharon remembers reluctantly leaving her children and maybe in a house down an asphalt road as opposed to a dirt road). Good-natured teasing accompanied the entire exchange. 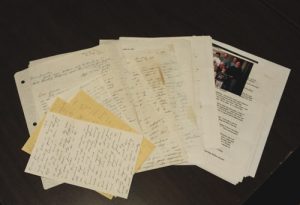 Dolores Bauman has kept all 42 of her letters that she mailed to the seven women. When the packet arrives, the receiver takes out her own letter and replaces it with updated news. The average length of circulation among the eight participants is one year.

“That’s why we’ve kept this thing going,” said Barb. “We have a good time together.”

She came in for some teasing earlier in the evening. Asked how long the letter takes to make a complete round, the group began to laugh.

“It goes along pretty well until it gets to Barb,” someone else noted.

“It can take me a while to get to it,” Barb said in mock defense. “I like to take my time and make a cup of tea and sit down. That’s a lot of news to get through.”

Everyone laughs, but they agree:  the arrival of the Circle Letter in one’s mailbox is momentous. The thick packet of eight letters includes major life news, handwritten or typed as the writer prefers, and sometimes includes photos or newspaper clippings. And there’s always your own dated letter to read and mull over as well before pulling it out of the pile and starting a fresh one to send along.

Barb confesses that there were times (“just a few!”) in her life when the Circle Letter has arrived and “nothing much is going on, so I just held onto it until I had something exciting to report.”

For a brief while, there was a penalty if you held onto the letter too long: inclusion of seven stamps, one for each participant. But that didn’t last long. Life just gets busy sometimes, the women agreed, and deadlines didn’t seem important as long as the letter just kept moving, no matter how slowly, on its appointed round.

One time, the letter arrived and there was nothing in it: someone had stuffed the envelope and forgot to seal it before mailing it. (That time, it did not move forward.)

Annie remembers that she forgot to let anyone know that she was moving to Haiti with her husband to work for Mennonite Central Committee “I don’t remember how, but someone went to the trouble to relocate me when we got home!”

All of the women present at the reunion spent time in the classroom. Peggy taught the longest, for 38 years in Augusta County in Virginia, but Sharon is close behind, with 32 years of teaching, mostly at an Amish public school in Ohio. Miriam is the only one still working in the classroom, as an instructional assistant. Barb taught and then became a reading specialist for IU 13, for 15 of those years working in a Catholic school.

Two of the women became librarians: Dolores was the first librarian in a newly established tax-supported library in a small town in central Illinois until her retirement. Lois retired as a librarian at Anabaptist Mennonite Biblical Seminary.

Annie, writing from Oregon with regrets for her friends, shared sentiments that seemed to capture the occasion and all of what they’ve shared over the years: “If someone tallied the good and happy versus the bad and sad [over the years], the scales would be weighed down with all the good of the children we taught, our own children and grandchildren learning from the values we modeled and taught, our service adventures overseas and in communities in the U.S., the faith communities we’ve been a part of, the trips we take to understand and appreciate other cultures … I feel so blessed  to be a part of you even though it’s long distance.”