"Waiting for the Return," by Ahmed Hmeedat, is featured in the Nakba Museum Project exhibit at Eastern Mennonite University's Sadie Hartzler Library Oct. 15-31. The exhibit opens on Saturday, Oct. 15, with a reception and talk at 3 pm. with museum founder Bshara Nassar, a Center for Justice and Peacebuilding graduate. (Courtesy photo)

The “Hope is Stronger than Misery” exhibit opens with a reception at 3 p.m. on Saturday, Oct. 15 in EMU’s Sadie Hartzler Library. It will close Monday, Oct. 31. 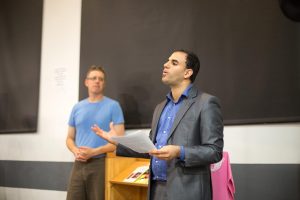 Bshara Nassar started working on the establishment of a permanent museum devoted to the Palestinian people in 2014.

“Nakba,” which means “catastrophe” in Arabic, is used to refer to the displacement of more than 700,000 Palestinians from their homes in 1948 when the State of Israel was created. Today, nearly 5 million people, nearly all of them descendants of the original group, are registered as Palestinian refugees with the United Nations. (Nassar’s grandmother is one, though he is not.)

The exhibit features maps, photographs, and graphs outlining significant historical events in Palestine; photographs of nonviolent resistance in the West Bank; paintings by Palestinian artists living in refugee camps; and video accounts of the Nakba.

“EMU is like a home to me, and I am very happy to share my vision with EMU and the Center for Justice and Peacebuilding community,” Nassar says. “I learned from CJP that art is a powerful way to transform conflicts and create a deeper understanding and conversation and that’s what we are doing at the Nakba Museum Project.”

Permanent museum in the works

Since fall of 2014, Nassar has been working towards establishing a permanent space in Washington D.C. for what would be the first museum dedicated to Palestinian history and experiences, called “Museum of the Palestinian People.”

He has been building support through widespread travels with his exhibits around the United States.

The museum will present “the Palestinian story to a broad public audience through art, multimedia, and other interpretive forms of storytelling,” according to its mission statement. “The museum explores the creativity, culture, history and resilience of the Palestinian people and creates safe spaces for conversation and reflection.”

Graduate student Joanna Stauffer visited an exhibit last spring after spending a year living in the West Bank and East Jerusalem. She admired Nassar’s vision to publicize the story of Palestinians and has helped him bring the exhibit to EMU.

“The international community has rarely conveyed the stories of the Palestinians appropriately. The stories are either of victimhood and destitution or of vengeance and aggression,” she said. “When we try to tell another’s story, we summarize or simplify it, a tendency that I am not immune to. We have to summarize because we haven’t lived it. But, then the truth in the experience easily gets lost. This is why Bshara’s museum upholds the beauty that it does.”

The artwork is “raw, honest, challenging, compelling, first-hand unfiltered Palestinian stories told by those who live and continue to live them,” she said. 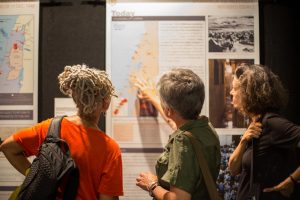 The exhibit aims to educate viewers about the Palestinian experience.

Nassar’s family in the West Bank, near Bethlehem, have been equally devoted to dialogue and understanding. They founded an organization called Tent of Nations dedicated to building respect and understanding between different people and cultures. EMU cross cultural groups traveling in the Middle East have stayed with the family for many years.

The exhibit is sponsored by EMU’s Center for Justice and Peacebuilding.