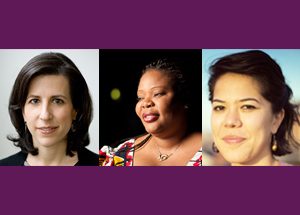 Honorees will be, from left, Ronit Avni, Leymah Gbowee and Suhad Babaa.

“The dinner will celebrate and honor women who have made long-lasting impacts in the global community, while raising scholarship funds for promising female scholars to attend graduate school at CJP,” said Daughters for Life founder Dr. Izzeldin Abuelaish.

To reserve your seat or donate to the fundraiser, click here.

Since 2010, nearly 400 girls and women from the Middle East have been supported by the organization to continue their education in the region or abroad. This will be the first graduate-level scholarship.

Recipients are chosen for their academic achievements, but also for their dedication to improving the lives of girls and young women in the Middle East.

“We’re are excited by the possibilities of working with Daughters for Life to expand graduate school opportunities for women peacebuilders of the Middle East,” said CJP Executive Director Daryl Byler, who spent six years with his wife, Cindy, as Mennonite Central Committee’s representative for Iran, Iraq, Jordan and Palestine/Israel. “Our master’s degree program in conflict transformation combines academic rigor with a true appreciation for the skills, knowledge and experience that each student brings from their native context, and we look forward to learning from the significant gifts of Daughters for Life scholars.”

CJP has strong ties to the Middle East, with current grant-funded projects in Iraq, a host of alumni from the region, and frequent faculty and staff travels for trainings in the region.

CJP has 603 graduates working in 78 countries, as well as thousands of participants who have attended peacebuilding and trauma trainings. The center offers a master’s degree in conflict transformation and in restorative justice.

The partnership has its roots in a 2014 visit to EMU by Abuelaish, a prominent physician who wrote I Shall Not Hate about his life, the tragedy that befell his family, and his vision for a peaceful future between Israelis and Palestinians.

In 2009, he lost three daughters to an Israeli bombing. Now associate professor at the Dalla Lana School of Public Health at the University of Toronto, Abuelaish began the Daughters for Life Foundation to empower young women to continue their education.

Abuelaish has won numerous awards for his peace activism, and has been nominated three times for the Nobel Peace Prize.

“The Daughters for Life Foundation is proud to be playing an important role in supporting the education of women in the Middle East,” said Abuelaish, “and we are honored to have Eastern Mennonite join us in our transformative mission to foster peace through education. Establishing a just, safe, healthy and peaceful world is only possible if we ensure that women are educated and able to fully participate in and contribute to their communities and the world.”

To make a reservation for the gala event or to donate to the fundraiser, please visit the gala website.

Story By Lauren Jefferson Posted on August 16, 2017
Share
Center for Justice and Peacebuilding mourns the passing of founding donor Marian Payne »
« From the Atlantic to the Pacific: Summer bike ride both ‘grueling’ and ‘exhilarating’