Will Winterfeld, co-producer with D. Michael Hostetler '75 of the documentary "Hope Was Not On the Ballot," speaks at the Martin Luther King, Jr. Memorial in Washington D.C. The two friends traveled from Canada to record observations and interviews before and after the 2016 presidential election. (Courtesy photos)

Three days before the 2016 presidential election, two Mennonites arrived in Washington D.C. from Ontario, Canada, on a kind of exploratory mission, a self-described “pilgrimage” to the American capital. 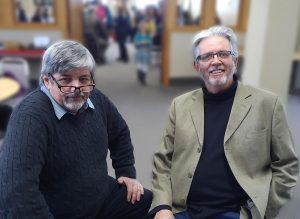 D. Michael Hostetler ’75 (left) and Will Winterfeld created the documentary.

Their pilgrimage was a reprise of one taken five years ago, when the Martin Luther King Jr. memorial was unveiled on the National Mall.

Over the next four days, before and after the election, D. Michael Hostetler ’75 and Will Winterfeld would witness fear, doubt and unrest, manifested in demonstrations and angry confrontations on the National Mall and in their own interviews with people of faith.

The election, won by Republican candidate Donald J. Trump, had a wide impact, “whether you are Canadian or not,” said Hostetler, advertising manager of Canadian Mennonite magazine and an American who has lived in Canada for 11 years. “The question remains, what should our response be under these circumstances as people committed to the way of Jesus? I feel like we found some powerful answers.”

Those “life-giving and hope-filling” answers are shared in a 15-minute documentary that Hostetler produced with Winterfeld, a Canadian friend who lived for 18 years in Georgia. 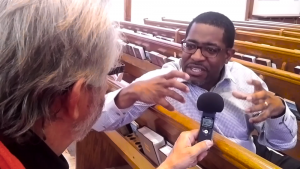 View “Hope Was Not On The Ballot” at the Canadian Mennonite magazine website.

The title comes from the words of The Rev. Dr. Keith W. Byrd Sr., pastor of Zion Baptist Church in Washington D.C. during a post-election day interview in which he shared his congregation’s varying degrees of disappointment.

In sermons and conversations leading up to the election, “we tried to remind the congregation that hope was not on the ballot, because our hope is in Christ,” Byrd says in the documentary. “Regardless of who is in office, our work continues, our mandate still holds true. We still have great work to do as believers, as disciples of Jesus Christ.” 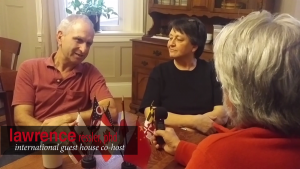 The narcissistic attitudes pervasive in American society are “antithetical to what our faith is, which is a faith of fellowship, of community, of being with one another … we ought to see this as an incredible opportunity to shine the light of Christ that much brighter.”

Lawrence Ressler ’76 and Sharon Martin ’78 Ressler, hosts of The International Guest House where the men stayed, are also interviewed.

“Our challenge as a church is to be ministers of reconciliation, however that plays out,” Lawrence Ressler says. “It can be simple honesty, it can be people bringing people together, people developing systems that have integrity, economic systems that are more just. There are so many opportunities for this work.”

The doors may be opening for a “holistic word-and-deed Christianity” that may attract new followers, Sharon Ressler adds.

Winterfeld said that the trip and production of the thought-provoking video was “following God’s impulse.” It’s not the first time the duo had sought and shared answers in travel and investigation; five years previously, on a trip to the unveiling of the Martin Luther King Jr. memorial on the National Mall, they had produced a slideshow and shared the experience with Stirling Avenue Mennonite Church upon return.

Similarly, this video was screened in front of approximately 55 congregants a few weeks ago, which led to thoughtful conversation and “a time of confession cautioning us in Canada not to get too smug about our political situation and reminding those present of the need for humility and compassion for those who suffer as a result of current political realities,” Hostetler said.

Jesus was born and grew up in the world where the political forces of the time were a grave threat, he added. “It’s fitting to be asking these questions about how do we react in this time and place.”

Home from his travels, Winterfeld has one answer, among others, urging people to move past the “carnival barker” and “see how much the country is suffering from division and pride. One of his favorite scriptures is from Hebrews, which he offers in the abbreviated form: “Provoke one another with love.”

In its entirety, the words are also powerful: “Let us hold fast the profession of our faith without wavering; (for he is faithful that promised;) And let us consider one another to provoke unto love and to good works.” (Hebrews 10:23-24 KJV)