The Rev. Osagyefo Sekou (left), the Rev. Seth Wispelwey (fourth from right) and Brittany Caine-Conley (fifth from right), a 2014 Eastern Mennonite Seminary graduate, march with other clergy Aug. 12 in Charlottesville, Virginia, to counter-protest the "Unite the Right" rally. The three will be honored by the National Council of Churches in November. (Photo by Jordy Yager)

As news of the Aug. 12 Unite the Right rally reverberated out of Charlottesville, Eastern Mennonite University — located 60 miles over Afton Mountain in the Shenandoah Valley — and its widespread community watched in dismay and anger. Because of the close proximity and many connections, numerous EMU community members were part of events that day.

Brittany Caine-Conley, a United Church of Christ pastor-in-training, and 2014 Eastern Mennonite Seminary graduate was one of them. As lead organizer for Congregate Charlottesville, Caine-Conley called for 1,000 clergy and faith leaders of all denominations to counter protest the gathered white supremacists.

Leading prayers and hugging participants, sometimes with a baseball cap on and always in black ministerial robes, Caine-Conley has been featured in the Washington Post and the New York Times. Her leadership was also noted in a blog post by Brian McLaren, senior fellow at Auburn Seminary, who was among those clergy joining in protest and ministry during the day.

“At EMU, we yearn, pray, and act for peace, restorative justice, healthy communities and the day when ‘we will be judged by the content of our character, not the color of our skin,’” said President Susan Schultz Huxman on Tuesday afternoon.

“As educators, we know that when we confront the worst examples of human frailty and viciousness, we are presented with teachable moments even as we reel ourselves from the dis-ease and disorientation these frightening events present.” The Charlottesville events will be fresh on the minds of students and faculty as the semester begins and provides opportunity for processing, discussion and action, she notes.

“We grieve with those who grieve, pray for hope and healing, stand with those on the margins and advocate for moral clarity — not moral equivalence — around racial and ethnic violence and civil speech in this country.” 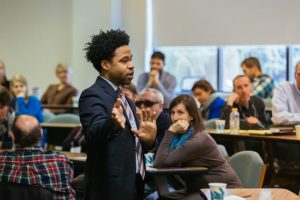 The weekend’s protests and the aftermath were held in prayer at EMU’s annual faculty-staff conference, the first gathering of the academic year.

Professor David Evans noted that for each of the five years he’s been at EMU, the conference has been preceded by racially charged events of national import.

The events in Charlottesville were particularly moving, Evans said, because Caine-Conley was a student in the class he created to explore white racial identity titled “Racial Healing and the Blue-Eyed Soul.” Her leadership in Charlottesville helped to affirm his own presence as the only African-American faculty member at Eastern Mennonite Seminary. Evans, director of the seminary’s cross-cultural program, noted that he teaches the course to mostly white students, pushing them to think about and consider “their responsibility as white Christians in the world.” 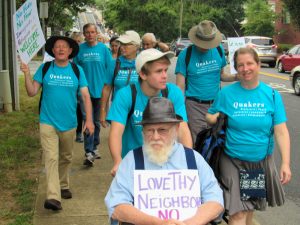 Carol Hurst (right), professor of social work, walks with her 84-year-old father Luke Hurst, Sr. ’56 and her son on Aug. 12. She is a resident of Charlottesville. (Courtesy photo)

Immediately after the event, Roy Hange — Charlottesville resident, Mennonite pastor and long-time instructor at EMU’s Summer Peacebuilding Institute — received a joint email from the superintendents of Charlottesville city and Albemarle county school districts asking for help. This kind of collaborative leadership among civic leaders is exactly what the community—and our nation— needs, Hange said in an interview on 1070 WINA radio.

“We can live in or stay in the fear that was created for us on August 12 or we can face into that fear, that kind of fear, like Martin Luther King, Jr. did and imagine how to transform it with a vision towards incorporating even the Other, the enemy, into an eventual friend,” he said, calling this action a “revolution of reconciliation.”

Kay Nussbaum, chair of EMU’s Board of Trustees, also invites the campus community to remember that “the peace of Christ emboldens us to generous acts of love and compassion as we live into our prophetic mandate (Micah 6:8) to ‘do justice, love mercy, and to walk humbly with your God.’”