Channah Fonseca-Quezada and David Quezada, here with their dog Bruno, say that their "time of introspection and learning at Eastern Mennonite University is what made us what we are today." They now live in Ontario, where Channah is in doctoral studies at McMaster University. The couple, formerly known as Anita and Cristian, have begun using their Jewish names. (Courtesy photos)

When Channah Fonseca-Quezada and David Quezada talk about their personal journeys that have merged and taken them from their native Chile to the United States and now to Canada, one thing is clear: Eastern Mennonite University is integral in their stories.

[Since attending EMU, the couple, formerly known as Anita and Cristian, have begun using their Jewish names.]

Channah completed a master’s degree in religion at Eastern Mennonite Seminary, but also took courses through the Center for Justice and Peacebuilding (CJP), including Strategies for Trauma Awareness and Resilience.

David, who studied law in Chile, attended CJP and earned a master’s degree in conflict transformation. There he also assisted professor Carolyn Stauffer with Silent Violence, a storytelling project for survivors of domestic violence, and professor Howard Zehr with the ongoing translation into Spanish of his book Changing Lenses.

Earlier this year, Channah finished a master of theology degree from the Vancouver School of Theology, and the couple has since moved to Hamilton, Ontario, where Channah is beginning her doctoral studies at McMaster University and David is looking for opportunities to develop processes of dialogue in the Jewish community about the ongoing conflict between Israel and Palestine.

While at EMU, the pair collaborated on various projects, one of which was offering workshops for Hispanic women coping with past trauma and the pressures of a new country and being ostracized due to immigration status. The workshops were built on the idea that doing art — painting, drawing, photography, poetry and more — would help participants reflect on their experiences.

For Channah and David, facilitating reflection was a natural extension of their own experiences at EMU, where personal reflection was central to their formative coursework.

“For us, having that time of introspection and learning at EMU is what made us what we are today,” Channah reflected recently. “There are so many key aspects of who we are and that will never leave us that were borne out of EMU.”

Two years after they were married, Channah and David experienced the physical trauma of an 8.8-magnitude earthquake in Chile in 2010. But they are also attentive to historical and societal trauma, including their own, and EMU was a place where they could explore, share and grow from their experiences. 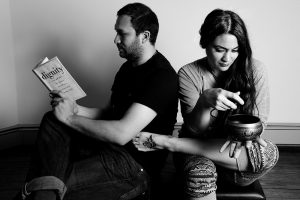 In an artistic representation of their work, David holds a book ‘Dignity’ by Donna Hicks and Channah a Tibetan singing bowl.

Both Channah and David were raised in Christian families with Jewish ancestry, and have since — together — chosen Judaism. That wasn’t a quick or easy transition, and it put them in touch with their own families’ historical trauma stemming from the Inquisition long ago and subsequent discrimination and persecution.

More immediate, though, was the trauma of growing up under the rule of the dictator General Augusto Pinochet.

David remembers checking his family’s household garbage to make sure no evidence of black market items or political dissent could be be found by anyone who might look through their trash.

“You were always scared of saying what your political views were because you didn’t know who you were talking to, and if something you said would go back to the army,” Channah said. “There were a lot of people who were paid by the dictatorship to spy on other people.”

Such threats meant that homogeneity was valued highly: not standing out was safer. Channah said that translates into “‘Don’t be anything that makes you stand out and be different, because you could be in danger.’ Even though that’s not the case anymore, that’s how trauma works. The traumatic stress is still there.”

Even though Pinochet’s rule ended in the 1990s, David added, the government was still considered “transitional” as late as 10 years ago, and he described the ongoing environment as one not welcoming of minorities, hugely divided along economic and political lines, and subtly violent.

“That kind of violence is invisible, if you look just superficially, but it’s really strong and it has really deep roots in the culture,” he said.

Not just a defining language

It was in that context that David trained in Chile as a human rights lawyer, motivated by “growing up seeing too many injustices against the people I loved, and a kind of rebellion against the imposed narrative of oppressor/oppressed that I experienced,” he said. “I thought that through justice this dynamic could be changed.” 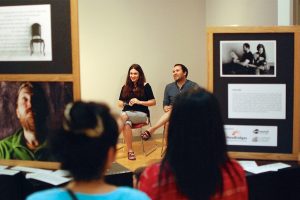 Channah Fonseca-Quezada and David Quezada with “Visual Echoes of Voices Unseen,” a traveling photo exhibit they created while at EMU for NewBridges Immigrant Resource Center in Harrisonburg.

But it wasn’t until coming to EMU that his current foundation for peacebuilding was established, and as a CJP graduate student, David says, he learned the language that has since defined his life.

“I lacked a lot of the language about peacebuilding, of conflict transformation,” he said. “I realized that justice is just one element in the process of social transformation and part of what, as a society, we should do so as to aim to build healthy communities.”

“I don’t know if the people at CJP see the magnitude of the training that they are providing,” he added, “but without that I couldn’t be working in the healthy way I’m approaching the society, the community where we are working right now. All those peace concepts within the Mennonite tradition are really important for us, even if we are not Mennonite — even for people of different religions, different traditions.”

Being educated at EMU in that new language of peacebuilding, though, was not solely technical. “You have this safe environment where you can speak about your background, where you can relate with other people of other traditions. That was a powerful energy in our journeys,” he said.

Channah also credits her time at EMU with bringing her academic Biblical studies into focus, in part thanks to the advising of professor Barry Hart, known for his work in trauma, identity and conflict studies.

Hart was David’s practicum advisor — and became friends, he said — and when Channah asked him to be her thesis advisor, he was “honored, and intrigued” by the thesis topic: the relationship between religious meditation, Hebrew chant and the trauma healing process. He said Channah has an ability “to see and explain complex spiritual and psychological relationships — for the purpose of self-understanding and from a desire to help others traumatized by violence of all kinds.”

While there are many who are exploring the intersection between psychology and Biblical studies, Channah said, she seeks out themes of resilience and dignity, themes that at EMU she realized were central in her own life starting in her childhood.

“Growing up a Latina was a difficult experience, with all the machismo and the sexism and really not feeling like I was a first-class citizen,” she remembers. As a 10-year-old child traveling with her father, a Baptist pastor who visited seminaries and attended conferences with Channah and her three-years-younger brother in tow, people would ask her brother what he wanted to be when he grew up.

“I was not looked at at all,” she said. “It was subtle, but it told me, ‘You don’t really matter. You don’t get to have choices, because you’re not a man.’”

Even today some in her extended family still don’t understand why she’s entering a doctoral program. “It still doesn’t fully register that women are just as capable as men. It feels so ridiculous to even say it, because of course they are,” she said.

Somehow, though, even way back as a child, something was driving her, something she can’t really pinpoint. It could have come from having also spent several of her formative years living in Canada and seeing a different form of society — or, she wonders, “Was it the Shekhina, the Hebrew name for divine presence, for the energy of God? I wonder if it can be that.”

Spiritual director and Eastern Mennonite Seminary professor Kevin Clark noted a “particular resiliency” in Channah, and the “interplay of her own inner narrative and the context around her which emerged as resourceful and creative engagement,” he said. “I appreciated the integrity with which she asked the questions of experience and the Holy, immersed at times in the silence of prayerful awareness which, in turn, inspired artistic expression and a discerned way forward.”

Whatever it was that was moving her, when Channah — and David — eventually came to EMU, they immersed themselves in the community, earning not just graduate degrees but also “the respect of many for their deep spiritual wrestling and personal integrity,” Hart said. “We were given a gift when they joined us.”

“There is something about EMU’s openness and sense of safety it creates, and the inclusiveness of people from different parts of the world,” Channah said. “Even though we’re all so different, we’re on the same wavelength of creating community and peacebuilding, and that creates a sort of connection that really opened our eyes not just to learning about others, but to learning about ourselves and where we wanted our journeys to take us.”