Eastern Mennonite University's Peace Fellowship leads a vigil for Colombia during fall semester 2016. The club facilitates events to raise the visibility of justice and peace issues on and off campus. (Photo by Andrew Strack)

Rarely does a week go by without some invitation from the Peace Fellowship to join other students, faculty and the Eastern Mennonite University campus community in a vigil or other form of activism in response to national and world events. In action since the late ‘60s, the club continues today with a committed core of student leaders.

The club has addressed racial injustice, U.S. foreign and immigration policies, extraction industries and gun violence in the form of educational events and grassroots demonstrations of solidarity and protest.

“Violence in any form holds each of us back from living in just, open and healing communities that strive to embody Jesus’s character and ministry,” explains co-president Noah Haglund, a sophomore double-major in peacebuilding and development and environmental sustainability.

One goal of the club, he says, is “to further the student body’s knowledge and engagement around social justice issues … We seek to address issues involving violence of any form, where it is be structural, visible or latent.”

Haglund and other club members are carrying on an historic tradition of student engagement in the Anabaptist peace tradition. Just three years after its first appearance in the Shenandoah yearbook, a 1980 article named “multinational corporations, registration and the draft, the arms race, SALT II and war taxes” as subjects of interest. While the focus may have shifted from nearly 40 years ago, the mission statement of that club, written by Fred Swartzendruber ’80, is remarkably similar to the one shared by current members.

Learning how we can be faithful in following Christ and spreading the gospel of reconciliation through working for God’s peace and justice throughout the world is a major goal. The group provides a sounding board and forum for students to process their concerns and convictions and facilitates public witness of these concerns. 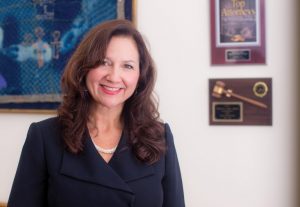 Attorney Sharon R. López chaired the Peace and Justice Fellowship while a student in the early ’80s. (Photo by Jon Styer)

Around this same time, Sharon R. López ’83 joined the leadership, leading a range of activities from chapel services to the joining of marches in Washington D.C. Lopez says she was especially attuned to issues in Latin America because of her bi-cultural upbringing. Now president-elect of the Pennsylvania Bar Association, the Lancaster-based attorney credits this role as “an excellent organizing and leadership training experience.”

Like its predecessors, Peace Fellowship is active on and off campus. Member Joel Wheeler, a junior social work major, has participated in out-of-state Peace Fellowship trips this year to New York City for a seminar on United Nations (UN) involvement in Haiti, run by the Mennonite Central Committee’s UN office, and to Fort Benning, Georgia, to protest U.S. foreign policy and armed engagement in Latin America with the grassroots organization School of the Americas Watch.

“Far too many people do not act when they see injustice or an opportunity to build peace,” says Wheeler. “By taking part in these events, I feel like I am taking action and standing up for those who are marginalized.”

The club attracts students for whom activism is a natural outgrowth of their convictions and past experiences. Treasurer Alyssa Moyer, for example, has a history of “peace-oriented work,” having volunteered for eight years in Honduran medical clinics and a children’s nutritional rehab center through the Mujeres Amigas (Women Friends) Miles Apart Project, an organization based in Pennsburg, Pa. and Honduras. The junior is a peacebuilding and development major. 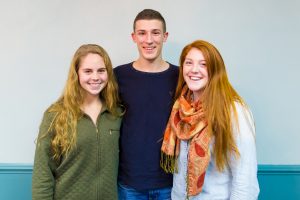 Student leaders of Peace Fellowship for the 2016-17 academic year are (from left) Alyssa Moyer, treasurer, and co-presidents Noah Haglund and Anna Messer. (Photo by Andrew Strack)

The club also raises awareness and sparks interest among students who may not have previously been involved in any activism but have a specific interest in a certain issue.

“We connect with groups outside of EMU’s community to allow students opportunities to further learn about and engage with the issues affecting our larger society,” says Haglund.

On campus, Peace Fellowship has hosted reflective group discussions in the residence halls, vigils in Thomas Plaza, and documentary showings and guest speakers in Common Grounds Coffeehouse. This fall, Presbyterian pastor The Rev. James Atwood discussed America and Its Guns: A Theological Exposé (Cascade Books, 2012) [the foreword was written by Walter Brueggeman].

A series of late fall events focused on gun violence, with an evening vigil and a “Memorial To the Lost” in a visible area along the main street through campus. 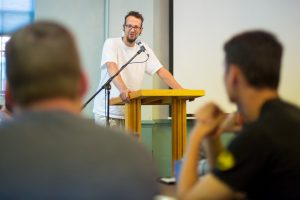 Shane Claiborne, Christian activist, speaks at EMU to announce a partnership with Jubilee USA Network, which works to build an economy that serves, protects and promotes participation of the most vulnerable. (Photo by Andrew Strack)

Spring semester activities will kick off with a group in attendance at the Jan. 17 protest against the death penalty in Washington D.C.

“We will be joined by activist Shane Claiborne as well as many other community leaders, ministers, activists, and people whose lives have been directly affected by the death penalty,” Haglund said.

Moyer hopes Peace Fellowship “can be a space for students to discuss and engage in tough issues, that it can be educational, and that it can provide rich experiences for individuals to grow and find passion for building a more peaceful world.”
httpss://www.flickr.com/photos/easternmennoniteuniversity/albums/72157676215406261

Story By Lauren JeffersonStory By Randi B. Hagi Posted on January 26, 2017
Share
‘Welcome Your Neighbor’ sign continues to spread around the nation, to the delight of its creators at Immanuel Mennonite Church »
« Special education teacher Sarah Beck ’11 Weirich on what she values about EMU’s teacher preparation program