George R. Brunk III '61, SEM ’64, professor and dean emeritus of Eastern Mennonite Seminary, poses with a butter churn he purchased at a student-run auction to raise funds for a new seminary building. The 1989 auction contributed to the building behind him, completed in 1993. (Photo by Jon Styer)

When Eastern Mennonite Seminary needed to raise funds for a new building in the late ’80s, students stepped up as they had in times of past need: with an auction. Perusing the items, Dean George R. Brunk III ’61, SEM ’64 was struck by the charm of a butter churn, hand-painted by Harold G. Stoltzfus ’76. The lettering on the churn commemorated the Oct. 13, 1989, auction and included the school motto , as well as a listing of all the previous deans, including Brunk. 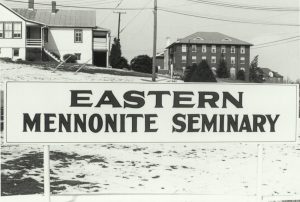 “I certainly wanted to donate and this just caught my eye,” said Brunk, who pulled the churn from his office where it has sat ever since for a Centennial-oriented photo shoot of important objects.

Brunk is the third generation to contribute — spiritually, financially, intellectually and academically — to the institution. Beginning in 1912, his grandfather bishop George R. Brunk I  provided the most articulate and persuasive arguments for why Mennonites in the eastern states needed to establish a conservative school. Historian Don Kraybill calls this man, “a self-educated, brilliant theologian,” one of the unsung heroes of the institution.

This academic year, Eastern Mennonite University celebrates 100 years, the embodiment of a vision of Mennonite leaders in Virginia, Maryland and Pennsylvania for an institution of higher learning for the training of the denomination’s youth. Though the seminary was formalized in 1965, Bible classes were a mainstay of the early institution’s curriculum.

As early as 1918, courses at the college level were offered in advanced biblical training. During the next ten years, there was an appreciable increase in college offerings.

By 1937, a four-year Bible program was instituted and within several years it was increased to five years. In the 1948-49 academic year, the Bachelor of Theology curriculum – a two-year post-graduate program – was added. The following years witnessed the continued growth of the program and its gradual development into a division distinct from the college. 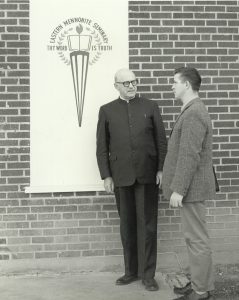 In 1960, the curriculum was expanded to encompass three years of study and the Bachelor of Divinity degree was offered for the first time. The Master of Divinity degree was first offered in 1968-69 and the Master of Arts in Religion degree in 1972-73. A one-year program leading to a Certificate in Biblical Studies was first offered in 1974-75. The Master of Arts in Church Ministries emerged as part of a major seminary curriculum revision in 1983-84, and was changed to the Master of Arts in Church Leadership in 1991 [this program is now the MA in Christian Leadership]. A Clinical Pastoral Education Program was added in 1999.

The seminary’s first permanent home was the former industrial arts building, a brick structure built in 1941. The seminary moved into this facility in 1968. The following year, the building was completely renovated, and additional classroom and office space was added in 1971.

Fundraising for a new seminary building began in 1989.

When ground was broken in 1992, $3.27 million had been committed in cash, pledges and deferred gifts. Another $1.2 million remained to be raised, including $450,000 for an endowment fund. At a point when fundraising seemed stymied on a plateau short of the amount needed to finish the building seminary students jumped into the effort, launching a “mustard seed campaign” and asking individuals to pledge $1,500 each.

By the fall of 1993 when the seminary opened, all funds were in hand or committed, with the bulk coming from individual donors and their estates. About $500,000 came from foundations. With a total contribution of $637,000, Richard E. Martin from the class of 1933 was the decisive donor.

He also donated a stained-glass window (pictured at right) for the chapel in honor of his wife, Edith.

The seminary’s Martin Chapel, with its adjacent fellowship hall financed by Levi and Lillis Troyer, is used on a daily basis for worship services, meetings, and special events.

In 1965, Eastern Mennonite Seminary adopted its formal name and an acting dean was appointed. As mentioned above, George Brunk II was the first dean, from 1966-76. Richard Detweiler served as interim dean for 1976-77, at which time George Brunk III became dean and served until 1999. He was followed by Ervin Stutzman through 2009 and then Michael King through 2017. University provost Fred Kniss is currently interim dean.

Since the 1970s, Eastern Mennonite Seminary has offered credit for various pastoral training programs by extension in southeastern Pennsylvania. In 2008, the EMS extension located in Lancaster, Pennsylvania, was approved as a complete degree site.

Eastern Mennonite Seminary is a graduate division of Eastern Mennonite University. The seminary is an accredited member of the Association of Theological Schools since 1986. It is approved as an institution for the training of candidates for ordination in the United Methodist Church. Eligible students may receive educational benefits from the Veterans Administration.

Portions of this article were first published in Crossroads magazine.