First snack shop, owned by the Weaver family, was a gathering place for hungry college students

“Would you like to hear about how the first snack shop was started?”

That question was posed by Janet Weaver Yoder, who had read about efforts to collect dining hall history and stories for Eastern Mennonite University’s Centennial celebration in the Daily News-Record. 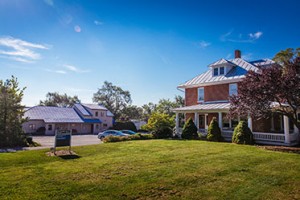 The Weaver house (foreground) with the current incarnation of Martin Store to the left. Both buildings currently house programs in the Center for Justice and Peacebuilding. In the 1930s, the Weaver family opened a small store serving the campus community in their home first, then purchased adjacent buildings and expanded store contents to include a snack shop. (Photo by Joaquin Sosa)

Janet, born in 1925, grew up in a two-story brick house on Mount Clinton Pike across the street from campus [the house now houses programs in EMU’s Center for Justice and Peacebuilding].

Janet is the daughter of Henry D. Weaver, the college’s business manager for 29 years.

“I’m going to take you on a roundabout way before I tell you about the Snack Shop,” she says, “and then you’ll understand more about how it happened. It was a different culture and a different time.”

Caring for students away from home

First, there was the campus, nothing like the size it was now. Janet remembers the school as consisting mainly of the multi-purpose Administration Building, or the Crackerbox, as it was called, and some faculty housing. Surrounded by farmland and pasture, the campus was located about 1.5 miles away from Harrisonburg’s downtown. Cars were “few and far between,” she says. In 1936-37, 175 students attended the high school and two-year college (the school did not become a four-year college until 1947).

Many students were from farm families, most all were Mennonite, and all were “quite young,” Janet remembered. “Faculty felt they were responsible for these children who were sent down here to stay in dormitories. Faculty had an interest in their safety and comfort. There were strict rules, one being that students could not leave campus without permission. Campus in those days ended at Mount Clinton Pike.”

In the 1930s during the Depression, all of the faculty tried to alleviate straitened circumstances. Gardens, goats, chickens, even a cow or two were common sights. Sometimes extra money could be made from selling produce.

Henry D. Weaver was an entrepreneur. He saw that students needed somewhere closer to campus to buy clothing and food. But he was also concerned that students be happy and comfortable on campus.

“The only snacks the students had might be from a package someone sent from home,” Janet remembers. “And clothing and sewing needs were difficult to obtain.”

In the early 1930s, her parents decided to open a small store in their home. Customers entered through a side door into the former dining room, which had clothing: black stockings; men’s collarless shirts and collars, material for prayer coverings, bonnets and dresses; and other sewing needs. (Female students had access to a sewing machine in their dormitory.) 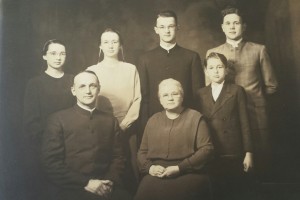 Henry D. Weaver, business manager at EMC from 1922-1951, with wife Sallie Jane Wenger Weaver and their children, including Janet Weaver Yoder (standing, far left), owned and operated a store and snack shop on Mount Clinton Pike in the ’30s and ’40s. (Courtesy photo)

In 1937, Weaver bought the building next to the house, known as Kline’s garage. He subdivided this building into two sections with dry goods and groceries. One brother learned how to butcher in order to run a small meat department.

Students had special dispensation to cross Mount Clinton Pike to go to the store. Janet remembers that her family worked in the store for long hours and sometimes would bring food back with them to eat while they waited on customers. Inevitably, their customers would be interested in the home-cooked food being eaten in front of them.

In the 1940s, the Weavers created a small back room “with tables and chairs and an electric grill, where we cooked hot dogs and hamburgers and made egg sandwiches. There was a milkshake machine and we also sold ice cream.” The snack shop was open from 7 a.m. to 6 p.m.

“It was a busy place,” said Janet, who managed the store after graduating from high school in 1943. “Even visiting parents came to buy food there.”

The store struggled through the years of World War II, when the rationing and coupon system made transactions difficult. In 1944, Weaver sold the store to a family.

After about a year, that family sold the store  to Lewis Martin, who continued the “department store,” offering Mennonite clothing and employing a seamstress who made bonnets and prayer coverings, as well as plain suits. 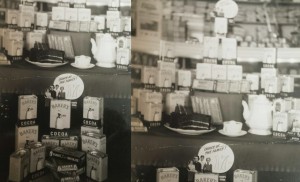 A cocoa display in the Weaver’s store.

The building, which houses the main offices of the Center for Justice and Peacebuilding, is still called “Martin Store.”

EMS eventually opened a snack shop in a building next to Martin’s Store, which was operated under the supervision of the Board of Trustees. (This long narrow building was where the feature photo was taken, according to longtime librarian Lois Bowman, who was a student at the time.)

As business manager, Henry Weaver was surely involved in oversight of this enterprise. Later he opened a laundry that served EMS, taking care that it was his own business he could run without the trustees telling him how to do it.

As for what happened to the snack shop in later years, that is a story for you, dear readers, to share with us!

Click here to share memories and information about the snack shop, from its early days through the 1957 move to campus proper. And stay tuned for an interview with longtime snack shop manager Helen Ours.

Story By Lauren Jefferson Posted on September 1, 2016
Share
Ted Swartz’s one-man play teaches the importance of laughter in a celebration of life lost »
« My father’s ‘generous orthodoxy’: Sara Wenger Shenk ’75 on her father, Chester Wenger ’41, and his engagement with changing culture