The Nelson Good house was the site of the Oct. 22 40th anniversary celebration of the Washington Community Scholars' Center. Alumni from this program and its precursor, the Washington Study Service Year, gathered for fellowship, a walking tour, a meal and storytelling.

Fellowship, Greek food and a walking tour brought together more than 50 people to celebrate the 40th anniversary of the Washington Community Scholars’ Center, known for many years as the Washington Study-Service Year (WSSY). Program leaders, current students, internship supervisors and alumni – one from the program’s inception – gathered in Washington D.C. on Oct. 22 for the celebration.

Director Kimberly Schmidt welcomed guests to the Nelson Good House in the Brookland area, home of the program since 2005. Schmidt shared anecdotes from her 17 years with WCSC before leading a walking tour through the neighborhood. 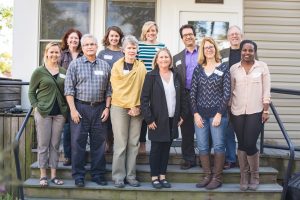 She spoke of arguments over “homemade granola with wheat germ sprinkles” versus “Captain Crunch with extra high fructose corn syrup chocolate,” and “50 flat bicycle tires” found stashed in the basement of the former WCSC location.

Underneath the humorous stories of “13 to 15 energetic and enthusiastic university students … all required to live together in a funky house in Brookland, a busy professor, and two patient and dedicated staff members,” though, is the program’s mission of learning through service and servant leadership. She recalled one student in 2001 describing their work as “serving the nation’s poor in the nooks and crannies of the nation’s capital.”

“WCSC is more than pranking students or going out on the town,” said Schmidt. “Our students have consistently received rave reviews from their internship site supervisors.”

Many participants are offered a position when their internship ends. Others find they like the D.C. metro area and return to the area to stay.

Connections in the program are also made that last a lifetime. Nathan Kauffman, who attended WCSC in 2009, interned at the Chesapeake Climate Action Network – a grassroots, nonprofit organization which fights global warming in the Chesapeake Bay area. This internship led to a staff position after graduating from EMU. He went on to marry current WCSC Associate Director Kelsey Anderson Kauffman, who had lived in the same room in the Nelson Good House the year prior.

Phil Baker-Shenk, one of the first WSSY students, attended the celebration with his daughter Jennifer Shenk. Shenk spent a summer term at WCSC in 2011.

Baker-Shenk shared his story after dinner at the Capital Area Food Bank, an metro-area organization working to end hunger and related problems which has hosted WCSC interns for decades. 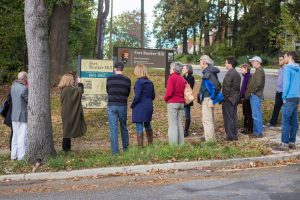 “I was a farm boy,” said Baker-Shenk during the open mic. “I was raised on the good ship Mennonite which sometimes sailed us to mission fields in the ‘world,’ but we always lived ‘in the boat.’ WSSY was, for me, a lifeboat tossing to and fro in an ocean of exhilarating anonymity and multiculturalism.”

Baker-Shenk explained how his internship with the Quaker-established Friends Committee on National Legislation led to a career in Native American Indian tribal advocacy. “WSSY was, for me, a safety net, a network, and a nest that served as a springboard into broader relationships, more diverse passions and vocations, and lifelong commitments.”

WCSC is the only urban studies program offered through an Anabaptist-affiliated college. It hosts students from EMU, Goshen College, Bluffton University and Regis College (Colorado).

Students from all majors participate in the program, which is one of several options for students to meet the cross-cultural requirement before graduation.

The event also coincided with a campaign for the WCSC 40th Anniversary Endowed Scholarship Fund. More than $39,000 has been raised towards the goal of $100,000. The fund will help students with significant financial need to reduce room and board costs, and enable them to attend the program. Those who most benefit from the fund include commuter students, first-generation college students, students of color and non-traditional students.