From the Atlantic to the Pacific: Summer bike ride both ‘grueling’ and ‘exhilarating’

Grantley Showalter was one of four Eastern Mennonite University graduates who bicycled across the United States in the summer of 2017. He said that the excitement when first seeing the Rockies after 1200 miles of flat Midwest was “unreal.” (Provided photos) 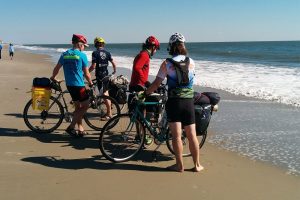 The trip began with the traditional dipping of back tires in the Atlantic Ocean at Rehoboth Beach in Delaware. It ended 59 days later in the Pacific at Lincoln City, Oregon, after 3,492 miles across 14 states and through Pittsburgh, Pennsylvania; Goshen, Indiana; Yellowstone National Park, and Portland, Oregon.

The summer of 2017 was a good time to travel for senior-year housemates Grantley Showalter, Jordan Leaman and Isaac Schertz and their friend Ryan Swartzentruber ‘16. The housemates graduated from Eastern Mennonite University just days before starting the trek, and Swartzentruber had quit his job in anticipation of attending grad school this fall. They didn’t have many responsibilities or time constraints, although Schertz did take a couple weeks off mid-ride to attend his sister’s wedding, and Showalter had to fly immediately home after the trip for his sister’s wedding.

Showalter, who majored in peacebuilding and development and is from Waynesboro, Pennsylvania, said he thought the ride would be “a sweet thing to do.” Leaman, who is from Harrisonburg and studied computer science, math, physics, economics, and environmental sustainability, had planned such a ride a couple years ago but had never gotten to take it. When he brought up the possibility of riding this summer, Showalter, who has always loved cycling, remembers thinking, “Alright! This is my chance!”

They knew it would be grueling at times, but they’d get to see the country in a new way. 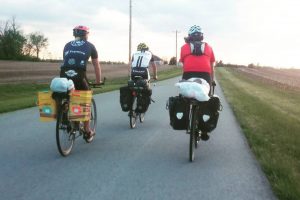 Showalter said that most cross-country riders make the trip from west to east, to benefit from the stiff headwinds Showalter and his friends faced, but they decided they wanted to end with the exciting views, the beautiful West Coast scenery rather than familiar eastern landscapes.

Those headwinds, though, were a demoralizing force.

“We had plenty of time,” Showalter said, “so it wasn’t like we weren’t going to make it. But there were a couple times I was like, ‘Why did we decide to do it this way? This is just agony. Will it be worth it all in the end?’ especially in the midwest, where there wasn’t too much to see and it was pretty hot.”

When the occasional tailwind appeared, they’d marvel: “Wow — this is so easy. Imagine if this was every day!”

One discouraging day, they set out later in the morning than they’d hoped. They were just trying to get in the miles, which seemed to be passing more and more slowly as the day wore on. And the headwind seemed to be picking up — they calculated it at 25 miles per hour. They took turns drafting off each other, like geese in a flying V.

Another day, in Yellowstone National Park, was their coldest. Leaman remembers it as “miserable.”

“We were all looking forward to taking our time through the park and enjoying the scenery, but the weather turned sour and we were forced to rush it,” he said. At one point they found themselves on a road above a canyon, at 8500 feet elevation, in 35 degrees and with heavy snow falling all around them.

“About 4-6 inches had already accumulated on the forest floor and the road was slushy,” Leaman said. “There was a steep drop-off on the right side of the road and no shoulder to safely bike on, so we were on edge the whole time.”

On their longest riding day — 160 miles — the quartet left before 7 a.m. from just inside the Idaho border. Inspired by an earlier encounter with oncoming racers on the TransAmerican Trail who told them about 250-mile days, they thought a long day was something they “should try.”

Their goal was to reach Clarkston, Washington, but by nightfall they had made only ample progress. They kept riding, though, eventually getting close enough to decide, “We aren’t going to give up now.”

They arrived at 1 a.m. after 18 hours of riding. The next day they slept in and covered a more modest 30-40 miles. 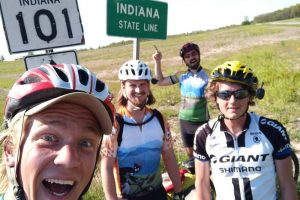 The riders mostly camped along the way, but also stayed with friends or hosts lined up through Warm Showers, a worldwide service that connects touring cyclists with free places to put up for the night.

Leaman had brought along a coffee grinder and drip cones and occasionally served coffee to their campsite visitors. In a campground near Harpers Ferry,  they met a man in his upper 40s who had decided he was done with his job and would do something he’d never done before: hike.

By the time the riders met him, he’d gotten better equipment and was heading south on the Appalachian Trail. In the beginning, though, Showalter said, he had “just started walking with an old backpack and a couple things. He said he did four miles his first day, which isn’t that much. We were impressed by his willingness to try something new.”

For breakfast each morning, they poured boiling water over Quaker Oats, sometimes with raisins or something sweet, or had instant grits. Eggs, Showalter said, took too much time, and required too much cleanup. He was usually eager to hit the road, to save relaxation for later in the day.

The cyclists frequented gas stations for restroom and water breaks — but not food, when they could restrain themselves. While full-time pedaling meant they always felt like eating, they often found convenience store options pricey and unhealthy.

Those stops were also where Showalter often found himself “out of my bubble of people thinking the way I do.” Even without a language barrier, it sometimes felt as though the people he met lived in a country unlike the one he knows. 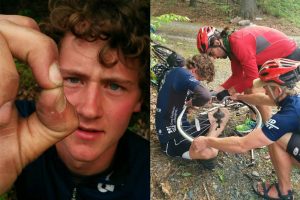 Jordan Leaman, Grantley Showalter, Ryan Swartzentruber and the first of over 20 flats.

“It’s expected when you go to a different country to have people see the world differently,” Showalter said, but he was surprised when conversations along their route revealed stark contrasts in perspectives.

One Nebraska man they met talked about the alcoholism on a local reservation in racist terms. “Some of the things he was saying were pretty offensive to me,” Showalter said, “but in the moment I couldn’t think of a good way of addressing it without making him defensive. I was this Eastern boy coming into this place where he probably has lived his whole life, and maybe hasn’t ever left. That was kind of a weird situation.”

Along the way Showalter noticed that other cyclists seemed to have plenty of money for good equipment. “I’m really glad that I had a chance to make the trip, but keeping in mind how many people can’t kind of makes me see it differently,” he said. “That’s one way I’ve changed.”

He also noticed that the bicycling community was “predominantly white people,” and he wonders how the trip would have gone differently if he and his companions would have been of different race. “Would people have been less willing to help us? Would it have been more challenging to find the things we were looking for?”

Leaman was struck by people’s generosity — and the possibility that sometimes it may have had some basis in his group’s privileged status.

“We encountered a number of people on our trip who placed near-immediate trust in us when offering up their homes, food, et cetera under the basis of ‘You look like good people,’ or ‘You look like you won’t murder me,’” he said. “While these comments were probably made under good intentions, it was easy to see how our status as young, white, college-educated males gave us undue privilege in so many parts of this country. It was difficult accepting hospitality from these people knowing that they might not have extended it to us had we looked different from them. It was disheartening to see that many parts of this country are still very far away from recognizing and confronting some very deep prejudices.”

Both Showalter and Leaman say the trip was worth it (“Of course!” said Leaman): They met people from all over and were welcomed by friends and strangers, worked hard, and saw parts of the country none of them had ever seen before.

Showalter is now readying himself for a year of voluntary service through Mennonite Mission Network at the Center for Restorative Programs in Alamosa, Colorado. He said that having mastered the mental and physical challenge of the trip only makes it more likely that he will tour more, or at least regularly commute by bicycle.

Leaman, who has begun working as a hardware support analyst at EMU, said it was “satisfying to work hard all day and then pull up the map on my phone during dinner to see how far the little blue GPS dot moved, no matter how small an amount.” He, too, hopes to tour by bicycle more, although he says next time he might instead traverse Europe, where bicycling is more accepted — he could do without the profanity-screaming hecklers and motorists who seemingly don’t understand how to navigate in the company of bicycles.

That Midwest slog? They conquered it, and in the West had moments of exhilaration. Leaman describes one downhill stretch: 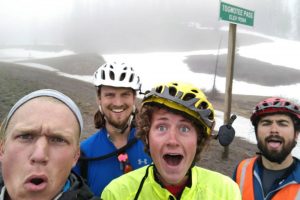 Ryan Swartzentruber, Isaac Schertz, Jordan Leaman and Grantley Showalter at the top of Togwotee Pass and ready for a 15-mile descent and “some screaming speeds!”

“We had a 15-mile stretch descending from the top of Togwotee Pass (9700 feet) down into Grand Teton National Park (6700 feet). We averaged 30 miles per hour for this stretch, but about 5-6 of these miles were above 40 miles per hour, with our top speed reaching just shy of 50. We had been biking through cold fog, but as soon as we started descending, the mountains of the Teton Range appeared before us. It’s scary hitting 50 miles per hour on a bike and holding it for miles and miles, but we felt accomplished for clearing our first mountain pass and were eager to accept the earned reward of a long coast downhill.”