At a crucial time in the history of her country, a Women’s Peacebuilding Leadership Program (WPLP) graduate has been named the first female Chief Peace and Reconciliation Officer for the Western Provincial Government of Solomon Islands.

Georgia Clarinda Tako Molia-Hanna, based in Gizo, earned a graduate certificate in peacebuilding leadership from Eastern Mennonite University in 2014. She was a member of a WPLP cohort that included 16 women from the South Pacific.

Molia, a resilient survivor of domestic and sexual abuse, says her peacebuilding leadership is guided by her faith, her desire to help others overcome similar challenges, and a vision of a peaceful future for Solomon Islands. 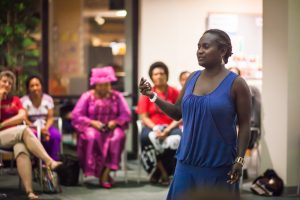 Molia’s appointment comes at a time when a major support mechanism has ceased operations: the Regional Assistance Mission to Solomon Islands (RAMSI) was created in 2003 in response to a post-conflict request from the country’s government. The partnership between the people and government of Solomon Islands and 15 countries of the Pacific provided security forces and helped to stabilize the country after a period of ethnic violence from 1998 to 2003. This commission ended June 30, 2017.

As chief peace and reconciliation officer, Molia works on the priorities of sustainable rehabilitation and livelihood programs and the empowerment of traditional governance and structures. These priorities are a collaborative effort of the current government to create sustainable peacebuilding measures in the province.

“Traditional governance is rooted in the history and lives of my Melanesian people,” she says. “Resurrecting this system of governance is a great tool to maintain sustainable peace and accelerating development for this post-conflict nation. We, the people of Solomon Islands have to take the ownership, feel and express that we own the peacekeeping process so that there can be peace and stability to our shores once again.”

In a patriarchal society and culture, the work is challenging, she said. Molia’s presence as a female in a leadership role has often caused tension and is seen as disrespectful to the participating male elders and chiefs.

“I have to apologize and make them understand that it is my job to deliver the government policy to the people,” she said. “The response is usually nodding of heads, and the tension eases as the workshop progresses.” 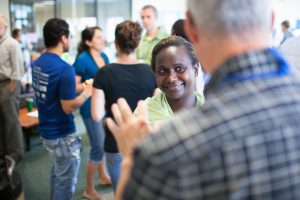 Molia-Hanna during a coffee break at Summer Peacebuilding Institute 2013.

Such gender discrimination does not discourage her, but inspires her in her work.

“It is a great opportunity to pave the way forwards for other women leaders … I believe that peacebuilding is everyone’s business and that you and I have to take ownership of this never-ending change process if we want sustainable peace in the shores of post-conflict nations like the Solomon Islands. This ownership starts with me today. I am, therefore, the face and the voice of change.”

Overcoming darkness to guide others

A survivor of domestic and sexual abuse, Molia hopes to raise awareness through her new role of the high rate of sexual violence and the need for trauma counseling. A long-term goal, she says, is the founding of an NGO to address this crisis.

In Solomon Islands, an estimated 64 percent of women aged 15-49 who had been in a relationship reported experiencing some form of emotional, physical and/or sexual violence, according to the World Health Organization.

Molia grew up in a home wracked by violence and alcoholism. She was sexually abused by close male relatives. As a teenager and young adult, she battled depression and attempted suicide five times. As a university student in New Zealand, she took to drinking and partying to help dull the pain and self-loathing.

One bright light was her great-aunt, who modeled care and concern for others while supervising a Young Women’s Christian Association hostel that served girls and young women. Molia would soon decide to follow her example.

In 2006, she gave birth to a daughter, who is now 11. Single parenthood forced her, and inspired her, to eventually begin the long road towards understanding how she had been affected by cycles of violence. Now a member of the Seventh Day Adventist Church, she says that her healing was aided by baptism in 2009.

“Searching God and the truth in the Holy Bible gave me the urge to become a person what can reach across and help heal another person who is troubled in such paths of life,” she says. “Those dark experiences have made me what I am today. They have made me a sensitive but stronger person with a world lens that see eye-to-eye and understand the dynamics of what trauma can do to your life if it is left unresolved.”

Before joining the WPLP program, Molia worked on environmental issues and development goals in a program funded by United Nations Development Programme (UNDP). She was working in natural disaster relief when she was accepted to the WPLP program.

The Women’s Peacebuilding Leadership Program, a program of Eastern Mennonite University’s Center for Justice and Peacebuilding, offers graduate-level, practice-based peacebuilding education designed to meet the needs of women in conflict zones. Coursework is completed with other women peacebuilders from the same country or region, and mentors assist in putting theory and classroom learning into practice. Learn more about the program here and about the current cohort here.