Homecoming and Family Weekend draws a crowd to reunions, arts and athletic events, food and fun

Saturday's Fall Festival on the front lawn at Eastern Mennonite University drew alumni, family, friends and current students for music, games, food and tailgating before and after athletic events. The annual Homecoming and Family Weekend Oct. 14-16 attracted more than 500 guests to campus. (Photos by Andrew Strack)

The six friends (see photo below at right) were among nearly 600 alumni who came to the Harrisonburg campus to reunite, make new friends, enjoy arts and athletics events, and revisit favorite places on campus.

Alumni who registered for the weekend came from 20 states and two countries, representing classes from 1956 to the most recent graduating class of 2016.

“We were thrilled by the attendance and support for the weekend,” said Director of Alumni and Parent Engagement Jeff Shank. “What was so special was seeing our community come together around its love for EMU, the positive influence and lifetime impact of the education we offer.”

Shank said the weekend’s new events, such as the Friday night a cappella concert and Saturday’s Fall Festival on the lawn, provided students, alumni and parents more opportunities to gather and interact.

“For me, the weekend is really about creating ways in which all of the people impacted by this place can be together and celebrate the joy and the legacy of EMU,” Shank said. “The EMU community is far more than current students and alumni. It includes parents of current students, spouses and family members of alumni, faculty and staff, even community members who are influenced and impacted by EMU folks doing good works in the area. Homecoming and Family Weekend is a time when we can celebrate that multi-generational impact and influence of this unique place and the people who shape it.” 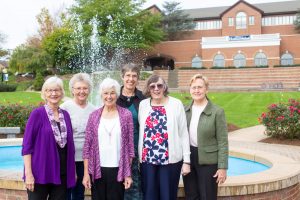 About 50 people gathered at the Chamber Singers reunion Saturday afternoon to honor Professor Ken J. Nafziger, retiring at the end of this year. Many returned the next morning to provide the final selection of Sunday’s worship service, singing “Dona nobis pacem” [Grant us peace], a canon by Johann Sebastian Bach.

In athletics action, EMU field hockey battled Virginia Wesleyan, women’s soccer lost 3-0 to Roanoke College, and men’s soccer drew a tie with Guilford in the final game of the day.

At the field hockey game, Hall of Honor inductee Jonalyn Denlinger (2002-05) was honored in a halftime ceremony. An All-American in 2004, Denlinger was a four-time All-ODAC First Team and NFHCA All-Region honoree. She was inducted into EMU’s Hall of Honor earlier in the day, along with track All-American Megan Mlinarchik (2004-06).