Hubert R. Pellman, professor emeritus of English at Eastern Mennonite University, passed away March 16, 2017, at Oaklea Nursing Home, Virginia Mennonite Retirement Community, in Harrisonburg, Virginia. He devoted his life to his family, to his teaching, and to service in the Mennonite church.

Pellman taught at Eastern Mennonite College from 1941 to 1983, with a few breaks for war-time alternative service, graduate studies and sabbaticals. He was Alumnus of the Year in 1969. The Hubert R. Pellman and Mildred Pellman Literature Scholarship Fund, established under the Humbert Pellman Endowed Chair in 1996, honors his memory and ensures current students receive assistance in their studies. 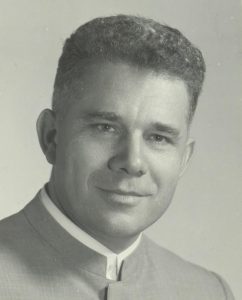 The chair recognizes Pellman’s high “standard for excellence in academics at Eastern Mennonite,” said then-President Joseph L. Lapp. “He was always spoken of with the profoundest respect.”

Pellman also authored a number of published histories, including “Eastern Mennonite College, 1917-1967.” Pellman and his wife, Mildred Kauffman ’35 Pellman, recently were interviewed by historian Don Kraybill, who has written the updated institutional history for EMU’s Centennial. The opportunity to read a draft of several chapters delighted Pellman, Kraybill said, adding that the couple were “very helpful and gracious” with their time.

Born near Richfield, Pennsylvania, Pellman attended junior college at Eastern Mennonite College, graduating in 1938. Two years later, he graduated with a degree in history and a teaching certificate from Susquehanna University.

President John L. Stauffer urged Pellman to return to EMS to teach English. To do so, Pellman earned a master’s degree in English from Bucknell University. Two days after graduation, he married Mildred L. Kauffman, whom he had met at EMC, and the couple returned to Harrisonburg in 1941.

Read more about their marriage in Daily News-Record coverage of their 75th anniversary.

Pellman taught English at the high school, English literature and British Renaissance literature at the college, and assisted D. Ralph Hostetter in the biology labs.

A conscientious objector during World War II, he was granted a farm deferment and took a four-year leave from EMC in 1943, spending half the time at his father-in-law’s farm and eventually beginning doctoral coursework at University of Pennsylvania, three times a week making a 60-mile train ride.

He returned to EMC in the fall of 1947, and spent the next 10 summers working diligently on his doctorate, finishing in 1958. He was ordained a minister in 1953 and served 17 years as pastor of the Mount Vernon Mennonite Church near Grottoes. 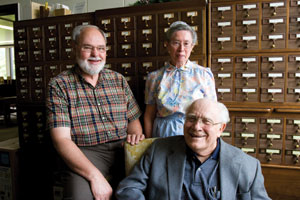 His first semester of teaching and pastoring, Pellman taught four sections of freshman composition, as well as sections of advanced composition and public speaking –six courses, a 16-hour load with 163 students. Professor Omar Eby, who shared these statistics in a laudatory essay about Pellman in 1996, says this achievement, “this commitment, this horror” fails description. “It is like making bricks without straw or breaking stones by hand.”

In 1961, Pellman was able to emerge from under his load of freshman composition (thanks to new faculty member James R. Bomberger ’55) and ventured into the delights of just about every other English class offered, from journalism to Biblical literature, Shakespeare, Milton and other treats.

In addition to a full teaching schedule, Pellman researched and wrote the official history, published on the school’s 50th anniversary in 1967. He also chronicled the first 25 years of Mennonite Broadcasts (now Menno Media) of Harrisonburg in 1979. He served as a visiting teacher at Westmont College in Santa Barbara, California; Goshen (Indiana) College; and Hokusei Gakuen University, Sapporo, Japan.

In 1972, with Daniel B. Suter and D. Ralph Hostetter, he was named among the “Outstanding Educators of America.”

Pellman retired in January 1984, 38 years after beginning his teaching career.

“Is there life after 38 years in EMC’s Language and Literature Department?” asked Eby in that 1996 essay. “Hubert did not pine, stagnate or become a bore. A weedless broccoli patch, family festivals to emcee, a shag rug to vacuum, water aerobics and cross-country skiing in Vermont to perfect. Also, he mastered a new IBM word-processor-computer.”

With diverse interests outside his field in biology and history, Pellman was a veritable walking encyclopedia. “His family could in effect ‘Google Dad’ for information about almost everything,” recounts a Daily News-Record obituary contributed by his family.

In retirement, he continued writing with a 75-year history of the Virginia Mennonite mutual aid programs (1989) and a family history (1996).

Pellman is survived by his wife of 75 years, Mildred (Millie) Pellman; two children, Donald Pellman and wife, Manon Larin-Pellman, of Franklin, Vermont; and Carol Pellman Mishler and husband, Robert, of Singers Glen, Virginia. He has five grandchildren. He is also survived by four surviving siblings.

Visitation will be held at 6-8 p.m. on Friday, April 21, at McMullen Funeral Home near Harrisonburg. The funeral will be Saturday, April 22 at Park View Mennonite Church.

Story By Lauren Jefferson Posted on April 13, 2017
Share
As national interest in racial healing work grows, CJP alumni join Coming To The Table leadership »
« Pastor and sheep shearer Carl Geissinger is devoted to both of his flocks