Kevin Ressler’s visit to his alma mater, Eastern Mennonite University, was planned weeks ago. So too was his scripture choice of Ezekiel 37:1-14, about Ezekiel’s vision of the Valley of Dry Bones. But the day he arrived on campus to meet with classes and to speak in chapel was the day after he heard of the death of his friend, Michael J. “M.J.” Sharp ’05.

Sharp, a UN official, was found dead in the Democratic Republic of the Congo with a colleague and their Congolese interpreter. He was investigating human rights abuses.

Ressler graduated two years after Sharp in 2007. He lives in Lancaster, Pa., with his family, where he is executive director of Meals on Wheels, a member of several non-profit boards, and a candidate for Lancaster city mayor. He was introduced by Campus Pastor Brian Martin Burkholder as a man who “believes in injustice and hopes to work against it instead of pretending it away.”

Ressler’s extemporaneous sermon, presented in Lehman Auditorium Wednesday [March 29] about Michael J. Sharp, is reprinted here with his permission. To listen to a podcast, click here.

More remembrances of M.J. Sharp and responses from the EMU community are posted in this coverage. 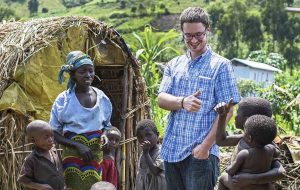 M.J. Sharp in the Democratic Republic of Congo while working for Mennonite Central Committee. (Courtesy of MCC)

I wrote a really good sermon. But I don’t have that sermon with me today because that sermon doesn’t matter,.

As I found on social media the last couple of days that they had found two bodies in Congo, and it said that they were Caucasian but they were waiting for the dental records, I did not allow my mind to drift to what had happened to my friend.

As I drove here at five in the morning, NPR had a story about Michael Sharp, and I thought about the scripture that tells me God will raise the dead, and I received no comfort — because my friend will not be coming back.

It is a difficult thing to follow a faith that calls us into the unsafe places.

And this is why we spend way too much time deciding who is allowed in and who is not allowed in, so that we in our relative comfort can feel better because at least we are not them. That is why we shut God’s doors on other people who are begging for healing.

And it is stories like that of Michael Sharp that should remind us to stop it:

To stop telling someone they aren’t good enough, because for God they are.

It is time that we as Christians begin to reimagine what it means to be called to follow Christ, who was fully human as well as fully divine. There is no excuse for us not to put ourselves in the places where the bones get dry and they do not find the sinews to come back.

It is no longer acceptable for us as extremely wealthy citizens of this world to think that we are doing enough when we pray—without action.

Those bones in this story get sinew and flesh but they do not live again until they get breath.

I am always reminded when I breathe that I breathe the same air that Jesus breathed—yes, fully divine, but never forget, fully human.

Jesus could no more live without air than we can. And as that air entered and exited the lungs of Christ, the breath of the Lord went in the direction of all four winds for all time.

After I heard the NPR story say Michael’s name, I pressed the power button on my radio, and I wept.

Eventually as I found myself gathering strength, I took my phone and decided I did not want to listen to any more news. I plugged in the cord and hit play on my music and the first song that came on randomly was a song from the musical “Hamilton” —the last song from that musical.

Who lives, who dies. Who tells your story?

Because who will tell my friend’s story: A man who chose to go into dangerous places without a weapon to make safer communities for strangers, for people he did not know.

That same place is a place where my cousin lived for three years with her children and husband, and other EMU friends as well: Jill and Johan, Adam and Sarah all lived in the Congo.

This place, this place here, exists to form leaders, not the type of leaders the world tells us to be—instead we are led by

a power unseen in conventional wisdom, a power rooted in faith, in a God who comes fully human and able to die, fighting against systems of hatred and injustice, leaving us a real and practical example, and leaving with us the breath that Christ breathed to breathe ourselves, to speak the stories of those martyrs before and those martyrs today.

Will we as a church, and you as the future of this church, of this community—will you choose to breathe in and out the stories?

That sign out front of this campus says “Thy Word is Truth,” and there are different people who see that sign in different ways.

The word of God, to me, is not dried ink on parchment. It is the opportunity to participate in divinity: To take your skin and the sinews that hold your bones together, to walk into the dangerous places,

To take on the mantle of justice;

To put yourself in a place where you may lose your life so that someone else may live.

I have a cousin on the other side of the family who travels frequently to Congo for her work with the Episcopal Church out of Washington D.C.

Who am I among this living cloud of witness who do not fear, and when they do they press on? Who am I in this world if I am not courageous enough to see the suffering of another and place myself into a position to change that? It’s a choice we all make. It isn’t the Christ’s choice.

Ezekiel talks about an army. What kind of army will we be? Ron Sider once challenged us with that very question and it created Christian Peacemaker Teams.

As you study in this place, full of legends of people who have changed the world, how will you go forth? What will you do? What are the armies of love that you will create? What circumstances will you change?

Ezekiel also reminds that valley of dry bones is large, innumerable. Well, so too are the valleys in our own times.

I fear that NPR will not say Michael’s name again, will be distracted by the politics of our more local circumstances. He will not receive the same type of hero’s welcome that a soldier would have if he had died.

But we can tell his story and the stories of others who have come from this community and other communities we know of, who have done a type of service — a service known to have a risk that was gladly taken on because the impact is the kind of paradigm-changing opportunity that Jesus himself provided, walking on this earth and leaving on the cross.

My invitation to each of you—student, faculty, community member— is to find a story of someone who has made a change, small or large, whether the consequence was their life or their comfort, and I want you to share that story with at least one other person, something that inspires you to step beyond the boundaries of your courage into a new world beyond the measure you ever thought you could make.

Breathe in the breath of God and then tell the story.