Center for Justice and Peacebuilding Executive Director Daryl Byler presents Jean Claude Nkundwa MA ’14 with the center's Peacebuilder of the Year award at Eastern Mennonite University May 24. Nkundwa works for peace in his native country of Burundi from exile in Rwanda. (Photos by Joaquin Sosa)

Jean Claude Nkundwa MA ’14, who works for peace in his native country of Burundi from exile in Rwanda, accepted the Center for Justice and Peacebuilding’s Peacebuilder of the Year award at Eastern Mennonite University May 24.

The award, which comes with a travel and tuition grant to attend a session of the Summer Peacebuilding Institute (SPI), had already helped the cause of peace that he works for. 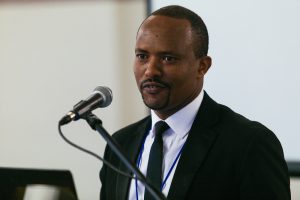 .Jean Claude Nkundwa speaks at the May 24 Horizons of Change luncheon after accepting the award.

Knowledge acquired in the SPI monitoring and evaluation course will aid his work as executive secretary of Burundi Citizen Synergy, a collaborative group of movements, media leaders and labor union groups, among others, on joint advocacy and communication strategies regarding peace in Burundi.

The travel grant that brought him to the United States has enabled valuable advocacy with influential politicians and peacebuilders: Prior to the ceremony, Nkundwa was in Washington D.C., where he participated in briefings with the National Security Council and the U.S. State Department, and met with Senator Christopher Coons (D-Delaware) and Senator Cory Booker (D-New Jersey). After the course concludes, he travels to New York City for more meetings.

The CJP Peacebuilder of the Year Award is given annually “to CJP alumni who have demonstrated exceptional commitment to CJP’s mission of supporting conflict transformation, restorative justice, trauma healing, development, organizational leadership and peacebuilding efforts at all levels of society,” according to CJP Executive Director Daryl Byler.

Nkundwa is the third recipient of the award. The first award was conferred in 2015 to Ali Gohar, MA ’02, founder and executive director of Just Peace Initiatives in Pakistan. Last year’s recipient was Tammy Krause, MA ’99, an expert in restorative justice. All of the 616 alumni who have earned master’s degrees or graduate certificates in conflict transformation from CJP are eligible.

In his acceptance speech at a luncheon in his honor, Nkundwa pointed out that the award was for “involvement, not achievement,” and promised to work hard to bring about change in his country and the region.

“This award tells me that there is work to do, that I need to persevere until I reach the goal,” he said. “This is the beginning. This is a journey towards a dream that I want to see and that then I can call an achievement.”

He also acknowledged fellow Burundi citizens in exile such as Pierre Claver Mbonimpa, and those citizens who remain in Burundi who continue protesting human rights abuses. Nkundwa also noted deceased peacebuilding colleague M.J. Sharp, a fellow EMU graduate whom he had never met but heard many stories about while working Africa’s Great Lakes region. Sharp, a U.N. official, was killed in the Democratic Republic of the Congo while on a factfinding mission.

“I accept this award in the names of all those people I respect so much,” Nkundwa said.

He also praised the academic and practical preparation provided by his conflict transformation coursework at CJP.

“Our education is pushing us just to think one way – take notes from a teacher, memorize it, send it back and that’s how it happens in the real life. Thank you for teaching me to move from place to place, from class to class, from theory to theory. This education has helped me to be more and more useful.”

Now, when confronted with people who say, “It is not possible,” he says, “We must make it possible.”

Read more about Jean-Claude’s work here in a 2016 Peacebuilder magazine article and in 2013 SPI coverage.