Join the meal: Part I of EMU’s Dining Hall Saga: 1917 to 1970s, site of fellowship, gentility and cultural skirmishes

Herewith is presented a somewhat exhaustive chronology of Eastern Mennonite College/Eastern Mennonite University’s dining services. Consume as much as you’d like and return for seconds. Or simply begin reading in the era of your choosing. We try to please all tastes.

Your two cooks are Brenna Cowardin, summer intern, who handled the prep work with skill, and Lauren Jefferson, who simply arranged the asparagus neatly in a row and stirred the “Deuteronomy Soup” of Brenna’s concoction.

Our research tells us that the dining hall is and was a treasured place of prayer and fellowship. Early on  — and present day — the dining hall built communal bonds. It has also been a space where clothing preferences and behavior sometimes stretched traditional proprieties.

We’d love to hear your stories of EMU’s dining hall, the space itself and the role it played in community life. Tell us about your favorite meals and moments. We’d especially love to hear more about the people who prepared and served the food. And the Snack Shoppe! Tell us about that, too!

Click on this link to make a potluck contribution. Whatever you whip up in the EMUstories kitchen might make an appearance in this timeline, which we think, like a well-risen loaf of yeast bread, will rise in the coming months.

Eastern Mennonite School begins on the 23-acre Assembly Park (see below) near Harrisonburg, housed in a former resort hotel, “a rambling, rundown building, heated by wood stoves,” large enough to accommodate a chapel, classrooms, dining room, library, offices and dormitory rooms. The land is purchased for $14,500. 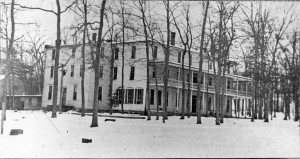 The school moves from the old hotel to the Administration or ‘Ad’ Building (also known as the “cracker box”), which includes the dining hall. 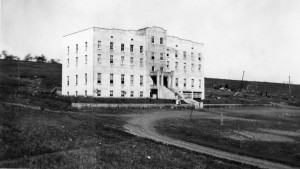 In his report to administrators, H.N. Troyer notes that the cost of running the dining hall has increased, partly in response to difficulties with the kitchen the previous year. “…Last winter Sister Weaver was at a very great disadvantage on account of the flue not working, which nearly smoked her out some times and never gave her the time to make things because the stove was so slow but the meals had to be on time. Consequently the food was not quite so plentiful as it might have been at times and the students raised quite a growl although they were getting fleshier all the time. The students had not forgotten the scarcity of last winter and promptly made it known to the new cook …Consequently while the food was plain and wholesome they had plenty of what they had and also a greater variety.”

Troyer also told campus administrators that if they could hire a student to bake the bread, they would save $220, the commercial baker’s bill, but there was no equipment available. 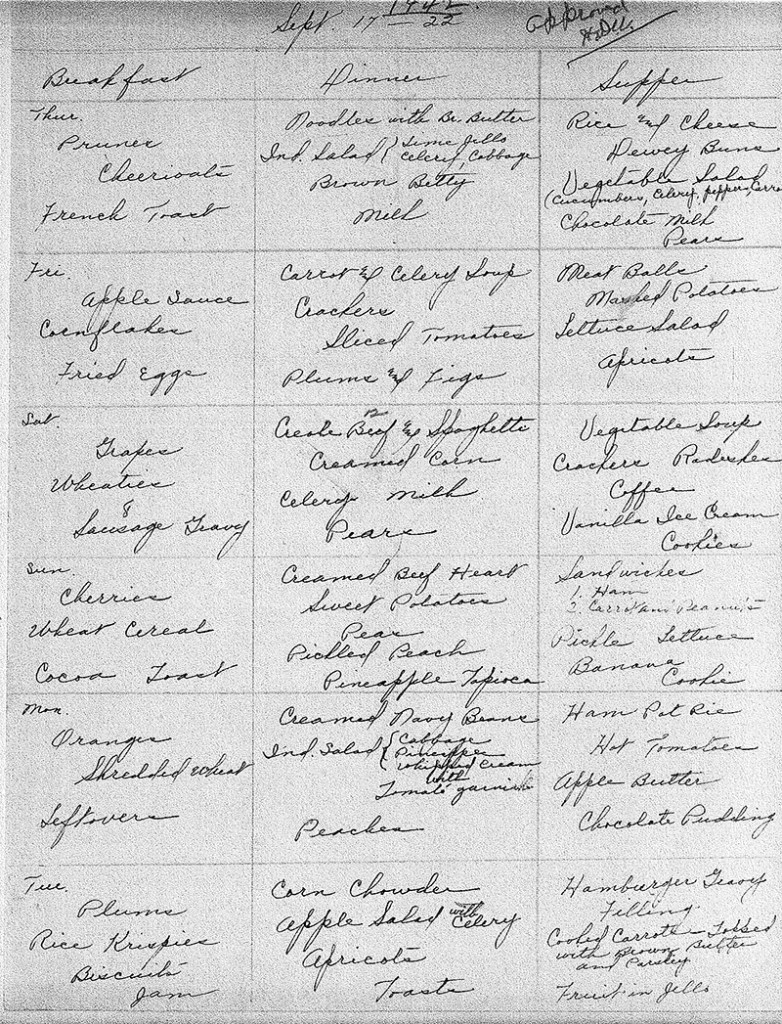 Meals were served family-style, with worship before breakfast and prayer, as would be expected, before lunch and dinner.  The host and hostess at each table were required to set an example for all students in both attire and decorum, to include everyone in conversation and keep all of the “guests” interested and happy. The host was also in charge of dismissing the table at the end of the meal, and the hostess served and refilled water for all at the table.

With 65 college students and more high school students, some behavior challenges in the dining hall were to be expected. In 1941, Lester Shank, chairman of the Dining Hall committee, calls for a “certain amount of self-restraint … to keep our dining hall atmosphere  Christian-like and wholesome.” The next year he acknowledges, “Eating is a duty. We must eat to keep alive. But the E.M.S. Dining Hall is more than that – it is a pleasant privilege. We laugh. We learn to know each other better.”

In 1943, perhaps in reference in World War II rationing, dining hall committee chair Russell Baer welcomes new students “to a year of unrationed pleasantries–dewy buns and pies only as Mary and Nanny can bake.”

From the 1946 handbook, Evelyn Shoemaker reminds us:  “Don’t forget to pass everything to your left and break your bread into four pieces.”

In 1946, Mary Emma Showalter Eby is hired to be the EMS school dietician (the next year, she convinces the Board of Trustees to start a home economics program). 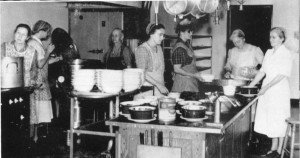 The cramped kitchen in 1956 as staff prepare to serve close to 500 students.

The dining hall moves from the ground floor of the south wing of the Ad Building to Northlawn, with first meal being served Jan. 1, 1950.

Family -style dining, continues, as recalls John Horst ’60 and Robert Hostetler ’59. Breakfast was served promptly at 7 a.m. and the doors were locked at 7:05 a.m. so those slow to get up were out of luck. “We used to throw on any combination of clothes to get there on time,” John says. Classes started at 7:30 a.m. so meals were eaten briskly.

John also remembers, “On Saturday evening the tables contained a large bowl of soup, containing the leftover vegetables from the previous week, nicknamed Deuteronomy soup, plus a big bowl of ice ­cream, and on Sunday noon students packed brown ­bag lunches for their evening meal.”

Today, the dining hall is one hub of EMU’s many sustainability initiatives. Wilmer R. Lehman ’57 remembers an early version of this thriftiness. Diners used cloth napkins, retrieved from an assigned pigeon-hole in a rack on the wall.  “After the meal, we each placed our cloth napkin into our place to pull out and use again the next meal. As I remember, we would get a clean napkin twice a week.”

Wilmer worked as a high school boys’ dorm manager during his senior year. “One of my responsibilities was to moderate the breakfast prayer time and give out table numbers at the door twice a week. Because of handing out numbers, I did not take a number but found a table where someone did not come to the meal. There came a time when I had my eye on a certain girl so I always hoped for a place at her table. She says that after appearing at her table a number of times she became suspicious of my motives. I finally ask her for a date one morning after breakfast.” Wilmer and Mary Louise Rufenacht ’58 have been married more than 58 years. 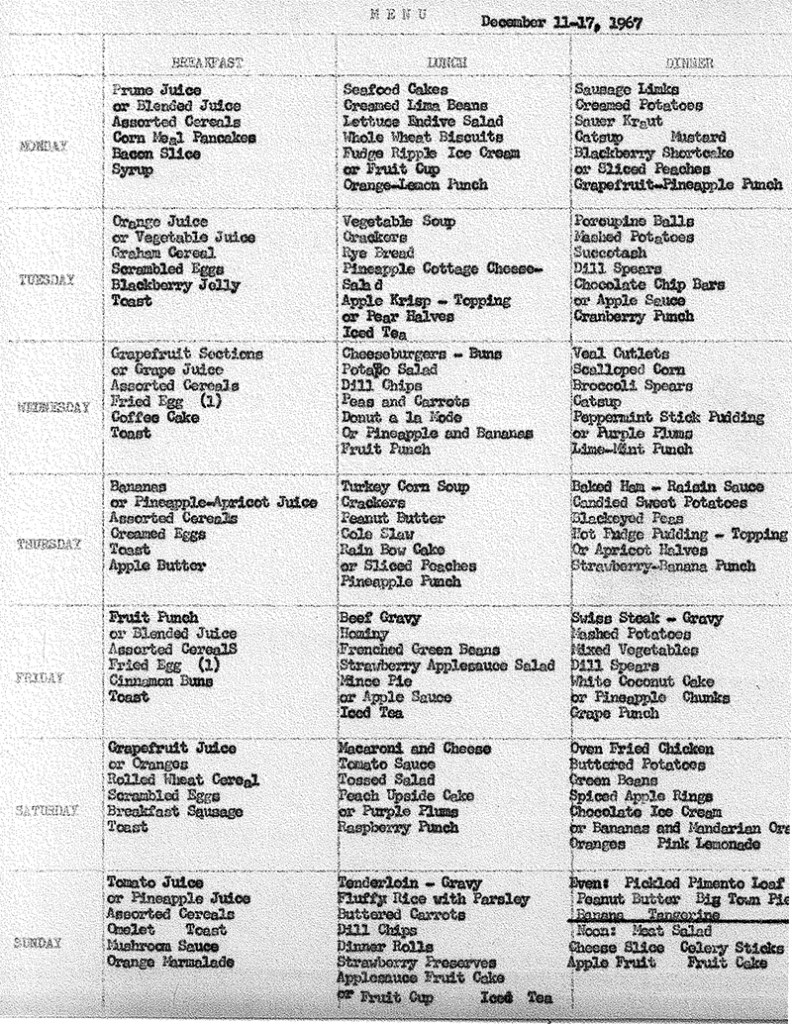 Breakfast is served cafeteria-style, while lunch and dinner are still family-style meals.

In 1962-63, she recalls: “Waitresses (usually juniors or seniors) would bring out the hot foods immediately after the prayer and later replenish bread baskets and water pitchers as needed. Guys were always glad to see more girls at their table because that usually meant more food for them. Students always looked forward to the once-a­-week fresh homemade bread, usually Thursday evening.”

Jim Bishop ’67 recalls seating as determined by a draw for numbers on Monday. “That number assigned you to a table of six and you sat at that table with five other people, some of whom you may not know, and you ate at that table for a week … looking back it was a really good thing. You got to know people you wouldn’t otherwise. The down side was if you were No. 6, there might not be that much food left [after it was passed around the table], especially if it was mostly guys.”

Grandison Hill, class of ’66, recalls, “There was a rhythm and ritual to it, standing until all arrived, the saying of grace, the singing of a song, the passing of the bread to the right, the filling of water glasses. And then the pleasant conversation, getting acquainted around the table, each day learning to know a new set of students. By the end of the year, everyone on campus knew each other. And the food … was always excellent.”

Bishop adds that “There were no seconds on anything except bread and water … the school was on a shoestring budget. We ate rice in all its various forms, including porcupine balls, which was a scoop of rice with peas and melted cheese on top.”

The Sunday noon meal was always “the best meal of the week,” he said, “but afterwards you would go into the side room and pack a lunch because there was no evening meal on Sundays. Most days there would be a big bowl of peanut butter mixed with grape jelly.”

Surprising as it sounds, 1961 was the first year that records were kept of the kitchen storeroom and supplies. We know this thanks to Mary Ethel Heatwole, a 1957 graduate of the home economics department who became a teacher and director of food service.

In 1962, she published “A Study of Food Services at The Eastern Mennonite College Residence Hall with Recommendations for Improvement” as her graduate thesis at Penn State University. Particularly concerned with planning for increased student enrollment (there were 512 students in 1960, with projected enrollment rising to 730 in 1965 and 900 in 1970), she makes recommendations regarding work flow, spacing improvements of kitchen and dining hall and serving processes.

During the summer of 1964, the dining hall was renovated to add a grill surface and beverage machines, according to Joan Horst. the format switched from family-style dining to cafeteria-style, a process which shortly curtailed any assigned seating as well.

“Work study students assisted the cooks behind the serving line, doling out the prescribed portions,” she said. “There were still no meal tickets; someone, often a paid student, would check off names on a typed list, as students came through the line, and would also accept payment from faculty/staff/visitors. It was a good way to learn everyone’s name.”

The cafeteria system works so well that a 1966 bid by Ara Services bids to take over food service is denied. In 1967, the first dining hall pass system is used, a preliminary version of meal swipes.

In 1969, breakfast was 60 cents, lunch 80 cents, and dinner $1.  “Term tickets” were available in other combinations of lunch and/or dinner, for five, six or seven days, with the most expensive being seven days of dinner costing $63. 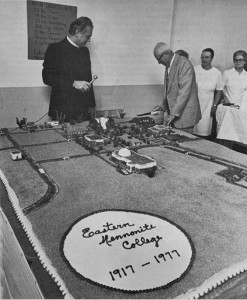 President Myron Augsburger watches as Harry Brunk, emeritus professor, cuts the first slice of the gigantic cake celebrating EMC’s 60th anniversary in 1977. The idea for the cake can be attributed to former Director of Media Relations Jim Bishop.

Steve Shenk ’73 says the dining hall was called the “cafeteria” by students. The soup, too, had gained a new, updated name by 1969, when he first arrived on campus: “By this time the ‘Deuteronomy soup'” was called ‘Mennonite Weekly Review soup’ since the ingredients were leftovers from the week.”

Clothing continues to be a point of contention. “Barefoot-Shorts-Sports Clothes on? I very strongly urge that you do not even bother trying to come into the dining hall. In the dorm, it is your business how you are attired. Here, it is mine and the other students’!” wrote Lynn Bontrager, director of food services, in a memo to students.

The Sunday noon meal was considered a “dress-up meal,” partly because students would already be dressed in their “Sunday best.”

In 1972, the yearbook tells us that buffet-style service was now the common format. A great benefit, said Bontrager, was less waste. While students complained (of course they did!) about the line moving too slowly, “on the whole, dining hall morale was boosted,” the yearbook states.

In 1974, for the first time in school history, no special seating arrangements were required for any meals. If large groups wished to sit together, they could seek permission. Casual wear is acceptable but shorts are forbidden and shoes required.

We’re lacking information about special events that dining services catered, but we do know about the 1977 commemoration of EMC’s 60th anniversary. A cake the size of a ping-pong table was decorated as a scale model of campus. It was part of the Founder’s Day celebration.