Jonathan Swartz began a new role in January 2017 as the first director of residence life, student accountability and restorative justice at Eastern Mennonite University. He supports nine employees, approximately 35-40 student employees and the 650 students who live in campus residence halls. A graduate of both Eastern Mennonite Seminary and the Center for Justice and Peacebuilding, Swartz was formerly restorative justice coordinator and worked closely with residence life staff and students. (Photos by Andrew Strack)

When Jonathan Swartz thinks of residence life at Eastern Mennonite University (EMU), he thinks of the idea behind home, a space from which and in which students learn, grow and transform. But he also thinks of neighbors.

“In order for homes—our residence halls— here at EMU to become communities, we have to have neighbors,” he says. “We have to ask the question, ‘How are we, together?’ What do we make and create together through our interactions and relationships?”

Swartz has been named to a new position at EMU in which he’ll help to grow this vision: as of Jan. 3, he is the campus’s first director of residence life, student accountability and restorative justice — supporting nine employees, approximately 35-40 student employees and the 650 students who live in campus residence halls. 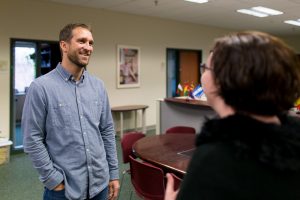 The new role is responsible for “developing and maintaining residential learning communities that provide a safe, secure, and comfortable housing and residence life environment centered around a campus culture sustained by restorative justice practices,” according to Jim Smucker, vice president for enrollment and student life.

“This new role more formally embeds the idea of a restorative community into our housing and student accountability functions,” Smucker says. “It is a great example of integration between the research and learnings on the academic side of the community with practice on the student life side. In this way we strive to be an exemplar.”

EMU is known both nationally and globally for its work in restorative justice. In 2016, EMU’s Center for Justice and Peacebuilding began the first graduate program in restorative justice in North America. The Zehr Institute of Restorative Justice continues the legacy of Emeritus Professor Howard Zehr, widely considered the “grandfather of restorative justice.” Since Zehr and others first developed the concept in 1970s, restorative justice has expanded from criminal justice venues into diverse settings, including university life, as a way of handling situations when harm has been done.

Instead of punitive measures that seek to attribute blame and punishment, restorative justice, commonly referred to as RJ, asks offenders to understand the effect of their actions on others and to take responsibility in a way that meets the needs of the victims. It has been implemented with wide success in K-12 education and higher education environments.

Swartz is well-equipped to both implement and educate about restorative practices in a Christian higher education community. In 2014, he earned both a Master of Divinity degree at Eastern Mennonite Seminary and a master’s in conflict transformation at the Center for Justice and Peacebuilding, while serving as a campus ministries intern and restorative justice facilitator and assistant residence director.

He then became the campus’s first restorative justice coordinator, focusing primarily on student support and accountability. Along with providing training, coaching and mediation, he spent a year researching the student conduct response system at EMU. The input and data resulted in a 2015 assessment and recommendations. In fall of 2015, he was named assistant director of University Accord. In addition, he has served as an adjunct professor in the Bible and Religion Department, and has also guest lectured in graduate and undergraduate courses in restorative justice.

Swartz’s work with residence life has roots in his personal experience as a resident assistant at Bethel College (Indiana), where he earned a bachelor’s degree in psychology. There, Swartz learned that “caring presence is perhaps the most important gift that students can provide each other,” he said. “Most of us really do want to connect deeply with at least one or two people, and student leaders are often well-positioned to make those connections.”

He took that student leadership experience, which he says was “restorative” before he knew what the term meant, into his professional life. Now he works to help other students understand the same principles of care and presence in the residential environment: “balancing support and accountability in order to recognize the harms that happen all around us, name the harms, and then work to empower healing and transformation for the sake of communities that truly care for each other and can offer hope to the world around us.”

Communities, he reiterates, are comprised of “homes and neighbors.”