The concert will be the choir’s last under the baton of Dr. Kenneth J. Nafziger, who retires this spring after 39 years as a member of EMU’s music faculty.

For it, Nafziger has purposely sought out musicians in Central Virginia and the Shenandoah Valley who can augment the more traditional selection of material offered in previous years. 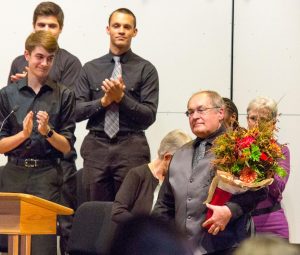 Kenneth J. Nafziger after leading a Chamber Singers reunion choir during a Homecoming and Family Weekend.

The result is a highly eclectic program that employs the talents of a wide variety of performers with connections to EMU’s Music Department, and to the Chamber Singers – past and present.

“I wanted to do something special for this concert – something unique,” said Nafziger. “It became an opportunity to include all kinds of people.”

Among them are several EMU graduates, as well as current and former colleagues of Nafziger’s ranging from David McCormick, founder of the Charlottesville-based baroque ensemble Three Notch’d Road and newly named executive director of the Shenandoah Valley Bach Festival, to Trent Wagler ᾽02, who fronts Steel Wheels, the nationally celebrated roots band.

“Going through old programs while clearing out my office,” reflected Nafziger, “so many memories came flooding back to me – the people, the repertoire, the communities for whom and with whom we sang.”

Hence, the appellation “Communities of Song,” testifying to Nafziger’s belief that “it takes a village, a community, for music to exist.”

The concert begins with a processional piece borrowed from an African-American church in Washington, D.C. It will be followed by a Bach cantata, with strings and oboes.

Bridging the middle portion of the evening is a section titled “Hope,” which takes its inspiration from the words of the late Martin Luther King Jr., who in a speech the night before his death observed that, “Only in the darkness can you see the stars.” It consists of spirituals and popular songs in which can be found, according to Nafziger, “reasons for hope in dire circumstances.”

The concert’s concluding segment is titled “Great Prayers,” and features settings of prayers attributed to Jesus, St. Augustine of Hippo, and St. Francis of Assisi.

Admission to the concert is free. However, any donations received will go to support the EMU Music Department’s scholarship fund.

Nafziger – who has earned renown not only for his choral and orchestral conducting, but also for his central role in the founding of the Shenandoah Valley Bach Festival – will continue as the festival’s artistic director and principal conductor for its forthcoming 25th anniversary season.

The festival runs June 11 through 18 at EMU and other venues in and around Harrisonburg.