Ken L. Nafziger honored for his many contributions to EMU

Ken L. Nafziger, former vice president of student life, with his wife Judy, joined colleagues at Eastern Mennonite University in early January to celebrate more than 13 years of service. Since 2003, he has led the Student Life division to expanded services and increased collaboration. (Photo by Dylan Buchanan)

At his farewell reception in early January, outgoing Vice President for Student Life and Dean of Students Ken L. Nafziger characterized his 13-plus years at Eastern Mennonite University as “a half-marathon.” The comparison drew a knowing laugh from colleagues, each of whom has memories of watching Nafziger jog through and around campus, both alone and with companions.

Provost Fred Kniss spoke about Nafziger’s many accomplishments and contributions to the university, for which he was honored by the Board of Trustees with an emeritus administrator title.

“Ken has helped EMU make important gains in our abilities to serve our diverse community of students,” said Kniss, launching into a list of positive changes Nafziger led in Student Life: from implementing the CoachLink program, and expanding career services health services, and multicultural student services, to leading the Crisis Management Preparedness Team since its inception in 2005.

“It has been a privilege to work here with this great group of people,” Nafziger said in his closing comments. “None of those accomplishments would have been possible or happened without the wonderful work of my colleagues in the Student Life department… I was fortunate enough to be here at the right time with the right group of people to see a lot of things come to fruition.” 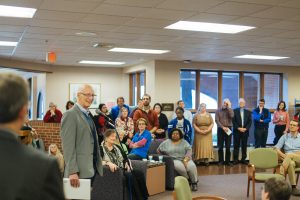 The campus community gathers to reminisce and thank Dr. Ken L. Nafziger as he says farewell to Eastern Mennonite University. Ken has worked in leadership roles in student life for 13 years. (Photo by Dylan Buchanan)

Nafziger and his wife Judy plan to “take a learning break” in Costa Rica to study Spanish. “I’ve taken special care not to say the word ‘retire,’” he added. “Sixty is the new 50 … or so I’ve heard.”

A host of colleagues took the opportunity to share remembrances, some humorous and many emotional, about working with Nafziger.

“I’ve enjoyed your commitment to developing students, and really all of us, towards personal improvement,” said Dean of Undergraduate Students Deirdre Smeltzer.

Brian Martin Burkholder, campus chaplain, noted the “stream of people at your door…if it was open and they wanted to meet, you always said, ‘yes,’ and then when driving by at night on my way home, I’d see your office light on. You made yourself available even at great personal cost. That was servant leadership and love in action.”

Several colleagues also offered thanks for his skillful and compassionate relationships with everyone in the campus community, whether student, faculty, staff, “friend or neighbor,” said administrative assistant Bernadette Griffith, who often accompanied Nafziger to meetings around campus. She praised him as willing to understand differences in individuals, someone who would always take time to talk with students, “even to the point of being late to a meeting … It was easy to tell how much you love this place and the people here … I saw this place through Ken’s eyes, and it’s quite beautiful.”

A particularly heartfelt thanks came from a faculty member, moved nearly to tears, who spoke “on behalf of other parents whose lives you touched” about how Nafziger helped, “with grace and compassion,” her child overcome some difficult issues and eventually graduate from EMU. 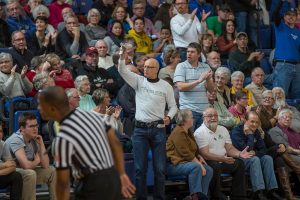 Ken Nafziger always jumped to his feet during the most exciting times at EMU basketball games. (Photo by Scott Eyre)

In addition to thanking Nafziger for his leadership and care, Director of Counseling Services Irene Kniss read aloud the “Top 10 Things We Will Miss About Ken.” A sampling from this list included praise for his wife Judy’s food and baked goods at potlucks, his knack for knowing and sharing words in other languages, the speedy way he crossed campus “from meeting to meeting to meeting,” his cluttered desk “that made us feel so much better about the state of our own desks,” and his affection for “anything Pennsylvania and Penn State.”

The top reason Nafziger will be missed was mentioned several times by other speakers: “leading the cheering with the bouncing program at basketball games.”

Nafziger, who graduated from EMU with a bachelor’s degree in math, psychology and secondary education in 1979, went on to teaching positions in Virginia and Kenya with Eastern Mennonite Missions before returning to graduate school.

Story By Lauren Jefferson Posted on February 2, 2017
Share
Midwife Misty Ward ’05 has brought more than 500 babies into the world »
« ‘Welcome Your Neighbor’ sign continues to spread around the nation, to the delight of its creators at Immanuel Mennonite Church