Service takes center stage in the latest collection of memoir from the Anabaptist Center for Religion and Society (ACRS) at Eastern Mennonite University (EMU). Titled “Re-Envisioning Service: The Geography of Our Faith,” the book will be released during EMU’s Homecoming and Family Weekend Oct. 14-16.

It is the third volume in ACRS’ series “The Geography of Our Faith,” and the first to include both Mennonite and Church of the Brethren authors. The book, running about 400 pages, features 16 stories in five sections, plus a foreword by Mennonite Mission Network executive director Stanley W. Green and an introduction by Nancy Heisey, EMU professor of Bible and religion and associate dean of Eastern Mennonite Seminary.

“Church life is a given for the storytellers,” Heisey writes, “and, for the most part, a comfortable and sustaining foundation for their service.”

Series editor Ray C. Gingerich, professor emeritus of theology and ethics and founding director of ACRS, says he is pleased with the way the new volume has come together.

V0lume 1, “Making Sense of the Journey: The Geography of Our Faith,” with a foreward by EMU President Loren Swartzendruber, is edited by Mennonite educators and church leaders Robert and Nancy V. Lee. 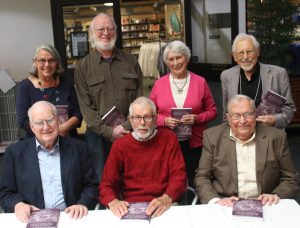 Volume 2 is “Continuing the Journey: The Geography of Our Faith.”

“Volumes 1 and 2 offer a window on Mennonite history and theology from the perspective of EMU’s retired faculty,” Gingerich says. “Volume 3 is perhaps more exciting for a broader readership, not just because it reaches out beyond Mennonites to include Brethren, but it also newly introduces the whole concept of service – how the very service we do and the occupations we engage in shape us and make us into the people we are.”

Many of the authors will be present to autograph copies of the book at Homecoming and Family Weekend, from 1 to 2:30 p.m. on Saturday, Oct. 15, in the Orie O. Miller Hall of Nations area of the University Commons.

“I look at the series as a way of helping us to remember these people in history, what their contributions were to our community,” Gingerich says. “And at the same time, I hope it is giving us models to follow.”

Gingerich says the series grew as members of ACRS, which describes itself as “a community of elders with an Anabaptist perspective,” began telling each other their stories at the group’s monthly meeting.

“We said, ‘We’ve got to write this stuff up,’ “ Gingerich says. “That gave birth to the first two volumes. It was never intended to become the flagship of ACRS, but it has become our most prominent identity.”

The fourth and final volume in the series, “Making a Difference in the Journey: The Geography of our Faith,” is scheduled for a fall 2017 release to coincide with EMU’s centennial celebration.