Gwendolyn Myers presents a capstone project on youth against violent extremism at Eastern Mennonite University in December. Myers, who is founder and executive director of the youth organization Messengers for Peace Liberia, is concluding a two-year fellowship with the Center for Women, Faith and Leadership Program at the Institute for Global Engagement, Washington D.C., in collaboration with Pepperdine University. She earned a graduate certificate with the Women's Peacebuilding Leadership Program in 2014. (Photos by Andrew Strack)

In Gwendolyn Myers’ native Liberia and surrounding West African countries, “young people can be used as perpetrators of violence and conflict,” she says. “They are used as weapons. But they can also be used as messengers of peace, if they are prepared to recognize the triggers and indicators of violence, and then address and resolve the situation peacefully.”

Empowering youth to transform their society has been Myers’ work for many years. “Peace is personal,” says the 2014 graduate of the Women’s Peacebuilding Leadership Program at Eastern Mennonite University. “I am always spiritually compelled to reach out and give a helping hand.”

Myers returned to EMU in December 2016 to present a capstone project she developed while participating in a two-year fellowship with the Center for Women, Faith and Leadership Program at the Institute for Global Engagement, Washington D.C., in collaboration with Pepperdine University.

The project focuses on violence reduction and conflict transformation in the youth population, building upon the foundation laid by her nonprofit organization Messengers of Peace (MOP) Liberia, in which youth develop life skills through coaching, mentoring, advocacy and volunteering for peace and development. Myers is both founder and director. 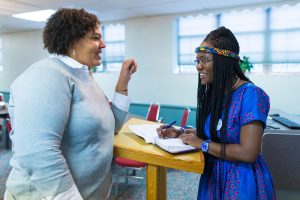 Ultimately, Myers wants to establish an institute of peace dialogue, which would formalize the work and build capacity. Youth are the country’s future, she says, and despite a civil war and challenges like porous borders, high corruption, limited education and poor infrastructure, she remains positive about Liberia’s future.

“Young people can no longer be bystanders or used to perpetrate violence,” she says. “They are not victims but contributors.”

Mobilizing youth is also the focus of Myers’ work as regional coordinator for West and Central Africa by the United Network of Young Peacebuilders, headquartered in The Hague, Netherlands. In these capacities, she has participated in high-level meetings with UN leaders, African Union, Liberian government officials and regional officials.

“It’s always a highlight to see a WPLP graduate return to campus having made great strides forward in her professional career and peacebuilding work,” said Leda Werner, WPLP director. “The research Gwen presented points directly to the necessity of her own work with youth to reframe messages of violence to those of peace. According to the findings she presented, Liberia is potential ground for the spread of violent extremism—meaning that now more than ever her work to engage youth in peace messaging and peacebuilding is needed. I look forward to Gwen’s development of a peace dialogue center as an approach to preventing increased violence and extremism in her country.”

Launched in 2012, the WPLP program has graduated 42 women from Africa and the South Pacific. The fourth WPLP cohort, comprised of eight Kenyan women, began their studies last summer at the Summer Peacebuilding Institute. After coursework, an online praxis workshop and implementation of an original intervention project, they will complete a graduate certificate in peacebuilding leadership in December 2017.