Dr. Alma Abdul-Hadi Jadallah, a consultant and professor who regularly teaches at CJP’s Summer Peacebuilding Institute, leads a training in December. The project, funded by the United Nations Development Programme (UNDP) and staffed with CJP graduates and faculty, will establish a dialogue center at Kufa University in the Iraqi city of Najaf and train dozens of young people in peacebuilding. (Photo by Daryl Byler)

Ahmed Tarik was 15 and barely out of ninth grade when his family fled Baghdad for Syria. It was 2006, and no longer safe to remain in the city where he’d been born and raised. After finishing high school in Syria, Tarik went on to Goucher College in Baltimore, Maryland, where he majored peace studies and was inspired by the writings of John Paul Lederach, founding director of Eastern Mennonite University’s Center for Justice and Peacebuilding. He soon followed that interest to CJP itself, where he completed his MA in Conflict Transformation in 2016. 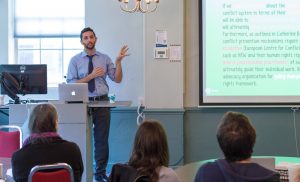 Ahmed Tarik, a 2016 Center for Justice and Peacebuilding graduate, is contributing to a UNDP project in his native Iraq. (Photo by Joaquin Sosa)

Shortly thereafter, Tarik jumped on a dream opportunity to consult for CJP on a peacebuilding project in Iraq, which he hasn’t been back to since leaving a decade ago.

“My entire trajectory up to this point has been to do something with peacebuilding and conflict resolution in Iraq,” he said.

Tarik is one of several CJP alumni working on the project, intended to establish a dialogue center at Kufa University in the Iraqi city of Najaf and train dozens of young people in peacebuilding. The $700,000 initiative is funded by the United Nations Development Programme (UNDP), and is being jointly implemented by CJP, Kufa University and two NGOs, the Iraqi Al-Amal Association and the Imam Al-Khoei Foundation.

Central to the effort are six trainings led by Dr. Alma Abdul-Hadi Jadallah, a consultant and professor who regularly teaches at CJP’s Summer Peacebuilding Institute. Three of the trainings are for academics and three are for youth from across Iraq.

“They were hungry for this, really looking for something to give them a way to speak about what they are experiencing, and also to address it,” she said.

While the academic trainings will lead to the establishment of the dialogue center at Kufa University, the youth trainings will culminate in a series of community peacebuilding project proposals from participants, 42 of which will be funded by the grant. 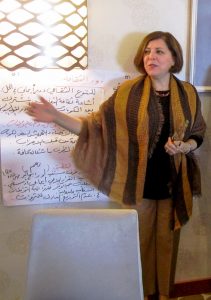 From his home in Baltimore, Tarik is supporting Jadallah’s trainings by translating curriculum materials into Arabic and writing new, culturally relevant material for the Iraqi participants. One of the aspects that most excites him is the opportunity to support peacebuilding among young Iraqis, many of them around the same age at which violence forced him from the country.

“Peacebuilding work is just planting seeds and hoping that they’ll grow, and this project is nothing but that,” he said. “It gives me hope. I don’t know what’s going to come out of it, but you keep pulling one thread and hope something comes out of it.”

Also involved are Cynthia Nassif ’14 and Najla Mangoush ’15, from Lebanon and Libya, respectively. After studying at CJP on Fulbright scholarships, both are pursuing doctorates at George Mason University. They will evaluate the project proposals that will be submitted by participants in the youth trainings, recommending the ones that should receive funding.

Another key supporter of the project is Ala Ali, a 2014 CJP graduate who works for the UNDP in Iraq. She said that Kufa University’s dialogue center and the newly developed Arabic-language peacebuilding materials developed for the trainings will enable the project to remain relevant after the grant period ends.

According to Jadallah, the longstanding connections that CJP has in the region through Ali and others involved on the project provide important credibility to the effort.

“That’s such a critical point in peacebuilding,” Jadallah said. “That was in my favor as the lead facilitator. People came in ready to trust us.”

“We’re extremely excited about this project because of its use of alumni,” says CJP executive director Daryl Byler. “It’s something that we’ve wanted to do for a long time, and it’s something that seems to be making the best use of the skills that alumni bring.”