Musician Russell James Pyle '03, on the banks of the Rio Grande near Albuquequere, New Mexico. He spent November as artist-in-residence at Big Bend National Park, merging musical performance with his professional background in ecopsychology. A licensed counselor, Pyle now tours full-time from his homebase in New Mexico. “I stepped off that plane and was immediately in love with the southwest,” says Pyle, who moved from the east coast within six months of first visiting the region. “I feel in complete resonance with this place. It’s become a sacred place for me, and unbottled the art that I do.” (Photo by Amanda Flory) 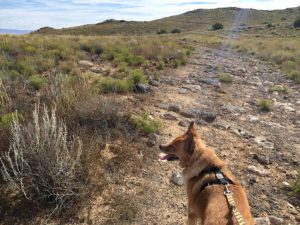 Editor’s note: The somewhat unorthodox narrative of the following article deserves explanation. Staff writer Randi B. Hagi was regrettably unable to travel 1,750 miles for an in-person interview with New Mexico resident and professional musician Russell James Pyle ‘03. She had to settle for a phone interview, which Pyle obliged to while hiking with his dog John Henry in the Sandia Mountain Wilderness Area near his Albuquerque home. The experience of vicariously walking with John Henry and learning more about Pyle “seemed like the best way to introduce readers to him,” Hagi said later.

“To quote Ron Swanson [from the television comedy “Parks and Rec”], ‘the national parks are probably the only branch of the federal government worth a d**n,’” says Pyle.

Throughout November, Pyle hiked the canyon backcountry every morning, wrote songs in the afternoon, and discussed creative processes with fellow resident artist Nick Collier at night.

The artist-in-residency program honors the important legacy of artists-turned-conservationists. From Yosemite’s initiation as a tourist destination in the mid-1800s, “the artists were the ones who got people to go to the national parks” with the paintings and pictographs they sent to the East Coast, Pyle explains.

Big Bend, he says, “is a place of healing, and it is a place of majesty, and people wouldn’t know that if artists weren’t coming back from this place and showing it to them.” 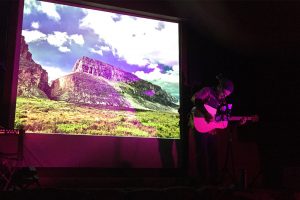 Pyle pauses the interview to instruct John Henry, an Australian Shepherd-Golden Retriever mix, to remove his nose from a cholla cactus.

The month provided introspection, personal rejuvenation, songwriting inspiration and outdoor recreation. Under the terms of the residency, Pyle also gave two programs over Thanksgiving weekend at the park’s amphitheaters. These talks were an opportunity for Pyle to meld his varied talents, interests and influences: he merged musical performance with his professional background in ecopsychology (Pyle is a licensed counselor, though not currently practicing).

One audience member left this comment: “A true connection was made with the natural world by his deep lyrics and appropriate interpretation techniques. I actually wept for a moment and left feeling in touch with this park and my inner-self.” 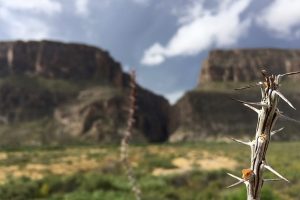 At the intersection of the natural world and the self, Pyle believes, is a great source of emotional healing. This healing, first experienced through fly fishing, changed his own life. As a practicing psychotherapist, Pyle had begun a PhD program in counseling education, where he encountered the field of ecopsychology and eco-counseling. But the academic approach to mental health felt inauthentic. The calm and focus experienced on the water and his growing interest in outdoorsmanship led him out of graduate school.

“By connecting with the natural world, you’re able to help heal the mind,” says Pyle. “Ecopsychology has become this very strong source of faith, and of truth and control.”

Pyle’s struggle with depression is part of why the southwestern desert speaks to the Lancaster, Pa. native.

“The desert is overflowing with metaphor in general, but one of the metaphors that speaks out to me the most is struggle,” says Pyle, naming scorpions, thorny plants and thirst among the antagonists. “I have gone through so much struggle in my life. I’m conditioned for that … I want to write songs that are going to reflect the depression, but are also going to reflect that things are going to get better.”

John Henry takes off running to a pile bear of scat and Pyle, catching his breath, admonishes the dog for his questionable taste.

Pyle admits he has a “musical pedigree.” His mother was a classical pianist, his father played the trumpet, and his grandfather was the conductor of a big band in the ‘30s and ‘40s.

“I was forced to play piano. I hated it,” says Pyle.

At 12, he found an old ukulele in the attic. Thinking it was a miniature guitar, Pyle took fishing line, strung the missing fourth string, and “had already picked out a major scale” by the time his parents got home that evening.

Thankful their piano-hating son showed musical talent, his parents bought him a guitar. Pyle taught himself to play and began various bands with his friends at Lancaster Mennonite High School. 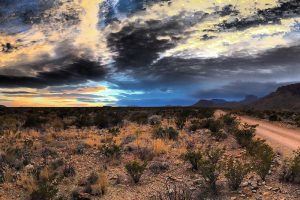 Those relationships, including that with his best friend and future wife Deborah Good ‘02, took him to EMU. There, he met Professor Ted Grimsrud (now emeritus professor of peace theology), who noted Pyle’s interest in music and advised him to join a physics of music course.

“It was so much math, and so little music,” Pyle bemoans, adding that he never took another music class.

Despite the poor advice, Grimsrud and Pyle became good friends. Their friendship has also overcome some questionable musical recommendations (Grimsrud did not care for Nickel Creek) and also one of Pyle’s college-era performances, which Grimsrud remembers as “just shouting.”

“He has regained his credibility since then, both with the evolution of his music and his recommendations,” jokes Grimsrud. “His new, solo stuff is impressive. He’s a thoughtful writer, going back, I’m sure, to the deep lessons in theology he got from me and [Professor] Christian Early! .… Now he’s got some real sensitivity, perhaps borne out of the challenging experiences he’s had in the years in between.”

Pyle stops to pick up a plastic bottle, now understanding why so many park rangers are grumpy.

“They work so hard to educate people and protect the land, and people trash it!”

He has had a rough few days adjusting back to the city.

“I was struck by noise. I’m not just talking about audio noise,” he says. Groups of people were overwhelming, lights were too bright, sounds were too loud. After being curt with a cashier, Pyle stopped to reflect. 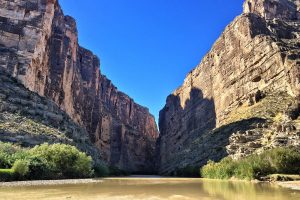 “You had a literal ‘mountaintop experience,’ emotionally,” he told himself. “Who came back from Big Bend? Because it’s not the same person that left Albuquerque.”

His study of ecopsychology informed him that, after being in the wilderness, people often feel despair in the bustle of society. In exchange, Pyle gained resilience from Big Bend, and the prioritization of experiential over material wealth.

“That noise is the opposite of who I am,” Pyle says of the rushed consumerist mindset. He can use that contrast to help him “focus to create, heal myself, and help those around me, in my community. The noise doesn’t have to grind me down.”

John Henry is now cruising through boulders where Pyle can’t follow. Pyle calls him back. John Henry ignores this. The dog’s stubbornness means that becoming a nationally touring, support dog to his human is challenging at best. Pyle laments the situation.

Pyle is far from being ground down. He heads off on tour in mid-December, which will take him to 13 states, including Harrisonburg, Virginia. In January, he lands in Birmingham, Alabama, to record his second LP, and he’s back home in Albuquerque for a Feb. 4 performance.