Lydell Steiner helped to found Connexus, a nonprofit in Holmes County, Ohio, that focuses on mediation. While earning an MA in conflict resolution from Eastern Mennonite University's Center for Justice and Peacebuilding, Steiner utilized the required practicum experience to lay the foundation for the organization. He graduated in 2014. (Photo by Denise Hazlett)

Lydell Steiner’s vocation came calling in the form of a persistent acquaintance who recognized his skills might fit a community need. The Ohio native was a team pastor at Kidron Mennonite Church when a community member repeatedly asked if he’d consider developing local mediation resources.

At the time, Steiner was enrolled in Eastern Mennonite Seminary, and had taken a few Summer Peacebuilding Institute courses at Eastern Mennonite University (EMU). But the recurring request for local mediation made him reevaluate his educational path.

Steiner gathered a trusted group to help discern his next step. He decided to transfer into the graduate program in conflict transformation at EMU’s Center for Justice and Peacebuilding. He devoted the required semester-long practicum to exploring mediation possibilities in Ohio.

Two years after earning his master’s degree — and the practicum experience which provided the foundation — Steiner and his community partners have created Connexus, a nonprofit organization committed to “transforming the culture of conflict in Holmes and Wayne counties of Ohio.”

Professor David Brubaker, Steiner’s advisor during his practicum, says CJP students typically come in on one of two tracks. Some enter the program unsure of their focus and discover it along the way.

Others, like Steiner, enter with a vision of the work they are called to do. CJP then equips them to achieve those goals.

“That kind of entrepreneurship is what the peacebuilding community needs,” says Brubaker.

Steiner’s practicum experience was a key piece of the strategic planning process that led to Connexus. 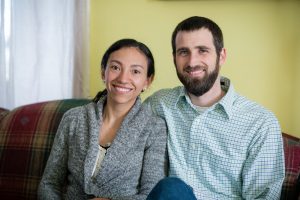 For his four-month practicum, Steiner decided “to flesh out more in depth that question of developing conflict mediation resources for our community.”

Steiner returned to Ohio and began his research. What current and historical resources were available for conflict management and mediation? What did local nonprofits, business leaders, churches and residents lack in this area? How were other mediation organizations operated, such as The Fairfield Center in Harrisonburg, Virginia, and Shalom Counseling and Mediation Center in Bryan, Ohio?

This research culminated in a “visioning session” in July 2014. Steiner invited key stakeholders from Holmes and Wayne counties to brainstorm how a mediation center might look and function. He also invited Brubaker to facilitate the gathering so that Steiner himself could present on the results of his extensive conversations with leaders from throughout the two-county area.

Steiner says this was “the moment that really helped me coalesce.” The group identified education and training in conflict transformation and networking for existing mediation resources as their primary objectives. They also decided to proceed in “an organic model,” says Steiner, gathering volunteer efforts rather than building an organization from the top down.

Broad community support is more important, Steiner says, than “the injection of a lot of energy, a lot of vision, a lot of money, a lot of building.” This approach means that growth is slow, but hopefully, more sustainable. Twelve individuals continued to meet, forming a steering committee.

Almost three years later, Connexus – the organization that grew out of that visioning session – has conducted mediations, built a network of mediation practitioners, published a website, assembled a board, and gained non-profit status. Steiner volunteers for the organization while working at Venture Products, a small-scale tractor developer based in Orrville.

In November, Connexus began hosting storytelling events to demonstrate mediation to those unfamiliar with the practice.

“I’ve come to realize that people still stigmatize conflict,” says Steiner. “It feels as though, if you ask for help in a conflict, that somehow there’s something really wrong with you … it helped me realize how hard this journey was going to be.”

In the spring, Steiner combined a guest sermon at an area church with a basic communication and conflict management training. By these small steps, an organization is built, as people learn what exactly Connexus could offer their family or community.

One insight Steiner took away from his practicum dealt with questions of efficacy. In general, he says, communities with longstanding not-for-profit mediation centers all had “graduates” who had gone on to develop their own niche practices.

“Our goal is not so much to develop the empire,” explains Steiner. “It’s to build the capacity in our community so that, if there are people who want to develop their own practice, they have those skills. It’s not about Connexus so much as it’s about our long-term community goals.”