“If there was ever a question about what happened in the early days of technology at Eastern Mennonite University, the go-to person was understood by everyone to be Joe Mast,” says Jack Rutt ‘72, special projects support for the provost’s office and former information systems director from 1999-2014. “It was understood almost ubiquitously that ‘Joe would know.’”

Check out a timeline of information technology at EMU.

Mast graduated from EMC in 1964 with a degree in mathematics. Following graduation, he taught math and physics at Eastern Mennonite High School before enrolling at the University of Virginia in astronomy.

Mast’s research for his dissertation, conducted at the National Radio Astronomy Observatory in Greenbank, West Virginia, explored the motion and distribution of interstellar hydrogen clouds near the sun. It was during those studies that he was introduced to the new field of computer science. 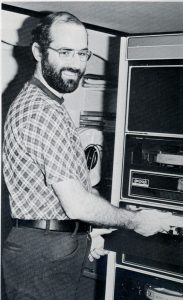 In 1968, Mast returned to EMC to join the new department of physics with fellow professors Robert Lehman and John Horst (some of the information in this article comes from an article that John Horst wrote for Integram, the mathematics department newsletter, upon his colleague’s retirement).

That same year, the first computer arrived on campus: The IBM 1130, which took up its own room in the new Suter Science Center, quickly captivated Mast. The next year (fall of 1969), he started teaching “NatSci 151 Programming Computers” (in Fortran).

He used the machine to grade tests for professors in all departments – using a punch card system that, he jokes, indicated answers in a similar manner to “the hanging chads in the 2000 election.”

Mast started using email in the ‘70s, when addresses were comprised of two numbers (“375,75,” he easily remembers years later.)

Around this time, he also used a teletype, or electromechanical typewriter, to communicate with professors at UVa.

Mast taught programming through the ‘70s, complimenting his autodidactic nature with coursework at then-Madison College across town. 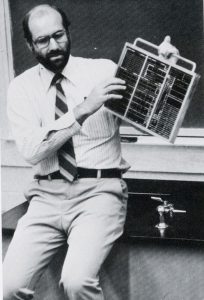 Joe Mast in 1981, the first year that a four-year computing degree was offered.

Notably, he didn’t have a formal degree in computer science until 1986, when he earned a Master’s of Computer Science at University of Virginia. This was several years after he gained approval, in 1979, to introduce a two-year computer science degree, and in 1981, a four-year degree.

The field was so new at the time that many academics, with tentacular knowledge that spreads across linked fields, could tell similar stories about the genesis of computer science programs at colleges and universities around the country.

With such knowledge naturally came the task of developing and supervising technological acquisitions. Mast served as Academic Computer Center Coordinator from 1980-85, during which time an Apple IIe word processing lab was installed (1983) and the first laser printer arrived (1987).

He also opened an Apple store for students, until the company took control of all sales.

In the mid-‘80s, Mast also taught courses in the Information Systems major developed by the Business Department.

In 1993, Mast wrote and submitted a National Science Foundation grant that resulted, the next year, in the internet’s arrival to campus. (NSF managed non-military Internet connections from the early ‘90s through 1998.)

“The internet is like a great big tree, so our connection went directly to James Madison, which went maybe to the University of Virginia,” Mast explained. “We were glad to have it funded.”

In fall 1994, Dan Marple was hired to head the new Information Systems Department, while Mast was on sabbatical at UVa.

Mast now lives in Lancaster, Pa. He was married exactly 50 years to Nancy Noll ’67 Mast, who retired after 30 years as a teacher and administrator in the Rockingham County Public School. Nancy died in 2015. He has two married sons: Brian, a nuclear engineer with Peach Bottom Atomic Power Station, and Darrell, a computer specialist at Data Computer Corporation of America in the department that handles the Medicaid program for the US government.

Lauren Jefferson contributed to this article.