The Eastern Mennonite University Jazz Band debuted in a noon performance in the cafeteria. Directed by Bob Curry (on the trombone at right), the jazz band will perform in a more formal concert on Thursday, April 20, at 7:30 p.m. in Lehman Auditorium with with local group Just Jazzin'. (Photo by Joaquin Sosa)

The drummer taps out an energetic pace on the high hat. The piano comes in, low and funky, with an ascending chord pattern. Then the horns: trombones elaborating on the piano riff, followed by trumpets flinging out the jaunty melody.

Bob Curry, conductor, waves his hand to cut off the music, and gives instructions on how to improve their timing and intonation. They play the intro again, and again, tightening the sound each time. Curry suggests the drummer try a swing rhythm. Then, the saxophonists return from their private lesson, the drums begin again, and Lehman auditorium erupts with the groovy jazz-fusion tune of “Birdland.” 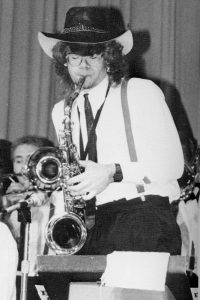 Dave Wert performs a solo with the 1989 jazz band.

“It’s one of those songs that you can – this may sound weird, but you can start to feel the music when you play it. That’s how you know it’s a good song,” says Leah Lapp, a freshman biochemistry major and an alto saxophone player in the 15-member jazz band.

From small combos to big band

Junior Harrison Horst started the band last December, after playing in small jazz combos at EMU and missing the big bands he experienced in high school. Joan Griffing, chair of the music department, connected him with Curry, who has given private trombone lessons and taught the brass methods course at EMU for several years. Griffing says she was pleased with Horsts’ initiative.

“We’ve had a terrific small jazz combo under the top-notch direction of Mark Whetzel for many years,” says Griffing. “Harrison’s request for a big band lined up well with Mark’s retirement and Bob Curry’s availability to direct. The new band is off to a great start!”

EMU’s first jazz ensemble was directed by Stephen Sachs from 1982-2004. When he departed, Mark Whetzel took over. The small jazz combo tradition continued for many years, until Horst came along.

“[Curry] really knows his stuff and is really pushing us to get better,” says Horst, who plays tenor saxophone in the jazz band. “And that means a lot to me, that I’m a part of a group that wants to succeed.” 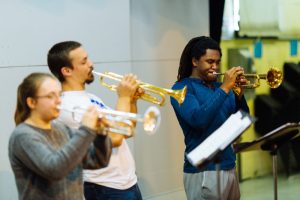 Student-musicians ‘willing to take a risk’

Curry comes with 41 years of experience conducting middle and high school bands in Colorado, Utah, and Shenandoah County, Virginia. He retired from public school education in June, while still teaching a class at Bridgewater College, giving private lessons, playing in the local group Just Jazzin’ (which was started at EMU in 2000) and volunteering with Habitat for Humanity. Curry has played trombone since elementary school.

“One of the things I really enjoy about the students here is that they’re not hesitant to take a chance, and maybe embarrass themselves, by maybe doing something that doesn’t quite fit the first time,” says Curry. “They’re just saying, ‘okay, that didn’t work. I’ll use that as a learning experience, and next time I’ll do something different when I have the same kind of solo opportunity.’”

Says Ayers, “I definitely enjoy the freedom of jazz.” Curry starts each rehearsal with scales and improvisation exercises. Then, they practice a wide repertoire of swing, funk, rock, and Latin jazz of all tempos. 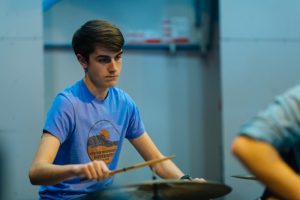 Joseph Harder on the drums. (Photo by Andrew Strack)

Many of the students bring instrumental experience but are new to jazz, like math education sophomore Madalynn Payne, who has played trumpet for seven years. Sophomore biology major Isaac McCauley played euphonium in high school, then taught himself trombone over the past three years before joining jazz band.

The band’s first performance was at the Honors Weekend banquet, after just four rehearsals. They have played two informal noon events and at inauguration this week. An April 20 concert will be 7:30 p.m., in Lehman Auditorium along with Just Jazzin’.

Want to share a story about your years in the jazz band, with Swing Sisters, Bubble Sister or jazz combos? Share in the space below or at our website, EMUstories.com.