Shalom-seeking in Flint, Michigan, with CJP grad Ryan Beuthin and his family

Ryan Beuthin drives two visitors through the Mott Park neighborhood in Flint, Michigan. Though clean and wide, the streets are flanked by decrepit, abandoned homes, vacant grassy lots and on occasion, a burned-out husk awaiting demolition.

“I can explain the arson to you,” he says. “When you hear the fire trucks at night, you know it’s another one, but it’s slowed recently.” Then he sighs. “It’s really complicated.”

For the fifth time in less than 45 minutes, though, he doesn’t use complexity as an excuse. He explains how and why arson happens in a large American city in the 21st century. The tour continues. He steers to the side of the road to point out a church plant that didn’t make it, a volunteer enterprise that did, the story of a resident he got to know. After each anecdote, he returns, doggedly, to his explanation of arson. 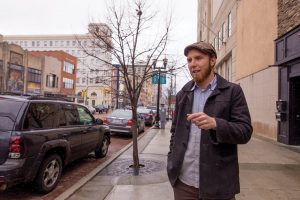 Ryan Beuthin on Saginaw Street in downtown Flint, outside the three adjacent restaurants that he manages. “Staying put” and committing to a place is an important characteristic of a peacebuilder, he says.

Here is a person who is unwilling to look away.

Beuthin, a 2011 graduate of Eastern Mennonite University’s Center for Justice and Peacebuilding, and his wife Janie are making the choice to live with their eyes open, to raise their children in a place that desperately needs both peacemaking and peacebuilding.

As operations manager for three downtown restaurants, Beuthin works with a group of socially conscious business partners. He attends ribbon-cutting ceremonies for new projects and claps alongside the crowds, but he knows grant cycles are fickle and so are the majority of out-of-the-area volunteers. While he rejoices when a new business opens downtown or a building is renovated, he is frustrated that the funding is not local, nor the ownership representative of the city’s diverse population. He is both impatient and patient at the same time.

Beuthin wouldn’t say he’s enlightened at all, just that he’s still learning, still having his eyes opened by God. “There’s blue pills and red pills,” he says, referring to a metaphor popularized by the film “The Matrix,” which reflexively recalls Plato’s shadows on the cave wall. “The blue pill is to keep everything the same, for ignorance. The red pill is truth. And once you take the first one, God has a whole lot more of them for you.”

Here’s a short list of Beuthin’s own awakenings: a cross-cultural semester in Costa Rica while a student at Olivet Nazarene University (Illinois); teaching refugees in a Houston (Texas) high school; deciding he really didn’t know what trauma meant when he worked with those students, and that “do no harm” wasn’t a possibility until he understood trauma; moving to Harrisonburg with Janie in 2009 to study at CJP. 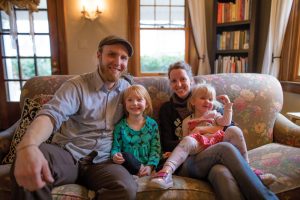 Beuthin with wife Janie and daughters Juniper and Starling. The couple is expecting their third child this month (December 2016).

There, among “Kenyans going back to Kenya and folks from Myanmar going back to Myanmar, it was really only Americans going to someone else’s country to work,” Beuthin recalls. “So the message I got was the better choice, at least for me and for us, is to stay here in this broken place and try to make a difference.” By then, the couple had a growing family and moving back to the Midwest, and their roots, was a good choice. Janie’s hometown of Flint became their new home in 2011. Beuthin, who grew up in Michigan and Indiana, also calls the area “as home as home could be.”

There were no issues with water when the Beuthins first moved to Flint and purchased their cozy two-story bungalow in the Mott Park neighborhood a few miles from downtown and one block from the Flint River. Even then, the city was a difficult and challenging place, with one of the highest crime rates in the country. Since the closure of General Motors’ Buick and Chevrolet plants, the city has hemorrhaged both jobs and population, from nearly 200,000 in 1960 to approximately 99,000 today. The city is 57 percent black, 37 percent white, and 6 percent people of other races, including a small but growing number of foreign-born residents. Forty-two percent live below the poverty line.

Then the corroded water pipes happened. “The water crisis is bad fruit on a plant whose seed was sown decades ago,” Beuthin wrote in Sojourners magazine, linking racism to the decline of one of America’s greatest manufacturing cities. “I encourage us white Christians to change our position and our posture and to seek new knowledge of who we are in the world that our ancestors have created. Listen, listen, listen. Don’t seek to lead. Read. Ask. Don’t defend. Be invited; don’t impose. And then, once you’ve allowed God to do a new work in you, once you have repented for the collective plank in our eye and sought shalom for our country’s legacy — then, maybe God will use you to help.”

Walking with humility, listening and learning continues to be a journey of discovery for Beuthin. This fall, he negotiated new terms at work to allow the donation of 10 hours a week to the church he and his family have been members of for the past two years. A few blocks from his home, Bethel United Methodist Church – a predominately African-American congregation celebrating 95 years – has recently become a space of notoriety. One of two Michigan Food Bank “resource hub” sites in Flint, the church is where Pastor Faith Green-Timmons famously asked then-presidential candidate Donald Trump to stay off his stump speech on a visit (“an imposed visit,” Beuthin says) on their water distribution operation in September.

“We’ve turned into a community center overnight,” Beuthin says, of the Michigan Food Bank siting. Additionally, the denomination has also selected Bethel to be a new Community Development Corporation. Forty-year church member Harold Woodson, Flint School Board president, will direct the new 501(c)(3) organization and Beuthin has been asked to assist him. The duo attended the Christian Community Development Association’s national conference this fall, and are in the process of collecting constituent and neighborhood input, solidifying objectives and building a board.

But what has been most remarkable to Ryan and Janie Beuthin, though, is the power of simplicity amidst all the complexity in their hometown. With initiatives, challenges, trainings and community conflicts swirling around, what has seemed to have the most impact in these times has been acting on the simplest questions. Beuthin says: Who’s going to board up the burnt-out homes? What do neighbors say about the church we attend? Have they experienced the shalom we claim to seek?

And to all of us, he asks: Who is seeking out and meeting the most immediate needs of neighbors? Are you hoarding your sources of hope, or seeking to sacrificially give so that others may have life?