Since 1996, Latino Student Alliance celebrates cultural pride and offers a welcoming space to all 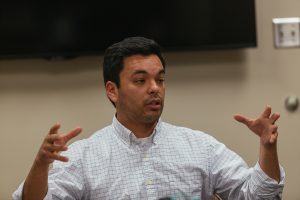 The song is fitting for the moment: Rick Castañeda ’98, who co-founded the club with four others in 1996, has just finished sharing about the club’s origins and early activity. One of the first things he told the gathered group was that festivity, with refreshments, has always been integral to the organization.

‘Each meeting was a celebration of relationship’

Intentionally, from the very beginning, every meeting was a celebration of relationship with each other. That was the goal. We had business to take care of, we had things to talk about, and Latinos are dynamic, wonderful, beautiful, smart people. And we can strategize, and we can meet, and can create these wonderful, amazing plans, where it’s not just about the party – but it’s also about the party. —Rick Castañeda

Castañeda first envisioned a student organization for Latinos during a Washington Study Service Year in 1995-96. During that year, he learned that his Latino roommate had suffered intense bullying while on campus. The harassment was so relentless that the once-straight-A student was now dealing with depression and on the verge of academic failure.

Castañeda became determined to improve Latinos’ experiences at EMU. Having graduated from Lancaster Mennonite High School, he was more comfortable in the Anabaptist culture than some Latinos at EMU. At the same time, though, he recognized that the culture could be exclusive: “I kind of picture it as this beautiful, arm-in-arm group, these Mennonites. Arm-in-arm in a circle together, singing this four-part harmony. And it draws people to it … It’s very supportive, very loving, very caring – if you can figure out how to get into that circle.” 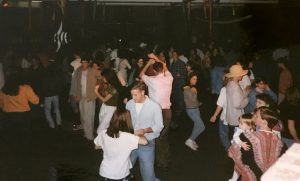 While in Lancaster over the summer, Castañeda took his idea of a support group to close friends and family.

“I quickly realized it wasn’t my idea, it wasn’t my vision,” he says. “It was automatically this amazing symbiosis, this shared vision, and I had never had that experience before, and have never had it since.”

The “Lancaster five,” as Castañeda calls them, were soon joined by Costa Rican graduate student Willroy Grant MA ’01 (conflict transformation), who became their first adviser in the fall of 1996. They wrote three purposes into the constitution: to provide encouragement, strength, support, celebration and pride for Latino students; to give a voice to Latino students and educate non-Latinos about Hispanic culture; and nurture the spiritual lives of each member.

And, of course, every meeting needed coffee, maybe a little pastelito, music and dancing— for Latinos, and for all. 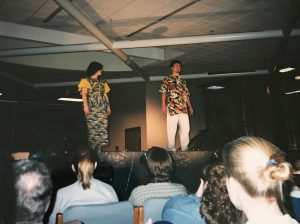 ‘We want educate you … to learn about you.’

Castañeda says that his friendship with a Caucasian roommate from Ohio helped form this philosophy. To this end, LSA held dances, hosted chapels, joined in Celebration hymn sings, and welcomed all into their meetings.

Art was a key strategy of both collaboration and education. Grant created a photography exhibit: black and white portraits of Latino students accompanied with responses to the question, “What does it mean to you to be Latino at EMU?”

A Nicaraguan artist, co-sponsored by the art department and Student Government Association, designed a mural which covered the retaining wall behind the southwest corner of the Campus Center. Art students and LSA members joined together in the effort. 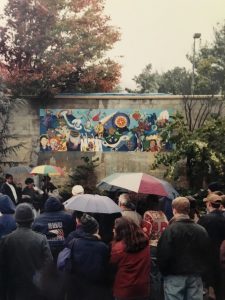 A mural depicting Latino experiences at EMU and in the Harrisonburg area is unveiled in 1998. The arts were one way the club helped to educate the community about Latino culture. (Courtesy photo)

“That was a huge source of pride for us,” Castañeda says. Among other themes, the mural linked Latinos on campus with the larger community; a poultry plant symbolized Latinos’ economic contributions, but also recent immigration raids, during which U.S. citizens were also detained.

“Some EMU students were detained … Latino U.S. citizens who studied here but were also working [there],” says Castañeda. (Several years later, after the paint began to flake, the wall was eventually scraped down and repainted.)

Castañeda brought his own border consciousness to the group’s activities: as a boy in Eagle Pass, Texas, his grandfather remembers watching U.S. agents mark what would become the official border. Before this, the Castañeda family had considered themselves Mexican citizens, but their home was a few hundred feet on the U.S. side. Castañeda feels that the privilege of U.S. citizenship, which fell on his family by happenstance, holds him accountable to advocate for undocumented immigrants.

“I always felt – and many of us in the group felt – to whom much is given, much is expected.”

‘A labor of love’

Through the years, LSA has been this labor of love for us; it’s been like a child of ours. All the founders feel that way … when we all left, we all had to kind of let go, like letting a child go off to school for the first time. Watching you do your work from afar has brought me a lot of joy, brought me a little bit of sadness, but it’s always been filled with emotion. I appreciate the leaders of this organization for doing the work to keep people coming. —Rick Castañeda

After graduation, Castañeda worked as a home-school liaison in Harrisonburg City Schools for 13 years and is now with Rosetta Stone. Advisor M. Esther Showalter invited him to visit.

Castañeda asked to hear about current activities. The club is busy, hosting freshman mixers, socials, a formal banquet, vigils and chapels in addition to regular LSA meetings. This semester, two to four members each week mentor local middle school students in the On the Road Collaborative after school program.

After the visit, club president Mario Vallardes said he enjoyed “knowing the reason why LSA was founded, and how we have to keep that story alive. Part of our mission is to help every Hispanic student and every minority feel welcome in EMU’s community. We want to be able to help everyone feel welcome, no matter where they are from or who they are.”

Mario Hernandez, the club’s vice president, adds, “At first the meetings were made possible due to the cultural similarities of Hispanic students that acted as a middle ground, but now we have members who don’t exactly ‘share’ this middle ground but nevertheless decide to join LSA. They seamlessly join us and become friends … and additionally they make the group’s middle ground richer for anyone else who might decide to come meet with us, too.”

Two decades after the first LSA meeting, twenty-some students with Central and South American citizenship, heritage or interests gasp, nod and laugh while Castañeda shares the history of their club. Two cousins from Honduras, a Mennonite Central Committee volunteer from Guatemala City, a white student from New Market who traces ancestors back to Cuba – they are all part of the fabric of a Latino Student Alliance 20 years in the making.