Professor Ken J. Nafziger talks with colleague Marci Myers at a May retirement reception. Nafziger taught from 1977-2017 in the music department at Eastern Mennonite University. (Photo by Andrew Strack)

“We can’t have a reception honoring Ken without music,” said Professor Joan Griffing at a May event marking the retirement of her music department colleague Ken J. Nafziger.

Nafziger stepped to the front of the crowded room and, as he has for countless times over the last 40 years, asked his Eastern Mennonite University (EMU) colleagues to sing. This time, it was “Amazing Grace,” the first two stanzas together and then the first stanza in rounds.

As the last notes diminished, he said, “In those very simple words, there is a biography of sorts.”

Then he asked for the second stanza “slow and in harmony,” and gestured for the final line to be drawn out: And grace will lead me home. 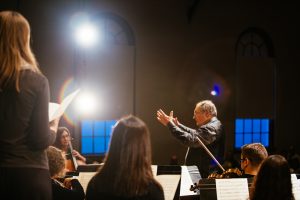 “When Ken makes music,” said colleague James Richardson later, “he carves out a space for everyone: for our selves but also to transcend ourselves.”

The reception culminated Nafizger’s final academic year at EMU, which included two other events, both featuring alumni musicians: a Chamber Singers reunion during Homecoming and Family Weekend and a spring concert with alumni guests titled “A Few of My Favorite Things.”

Contributing music and so much more

Besides teaching duties and leadership of vocal ensembles, Nafziger contributed to the form and shape of such EMU curricular distinctives as the Honors Program, senior seminar and the cross-cultural program.

Linda Burkholder, assistant to the cross-cultural program, pointed out Nafziger’s role as “one of the founding fathers,” leading to “EMU’s profound commitment to liberal arts cross-cultural education and for that, we have hundreds of alumni who are deeply grateful.” 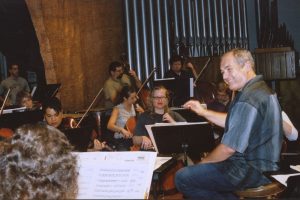 Nafziger’s legacy stretches far beyond campus, noted Griffing, who praised his “recognition of the role of the arts in the larger world.”

“He and I share the opinion that the role of arts has never been more important as a response, illumination and offering of a way forward to our fractured world. Artists are able to exact societal change through their creative expression, artistic creation and empathetic connection with others. Ken cares deeply about connecting his music with the issues of the day. This makes his work more than just notes and touches people in deeply meaningful way.”

Twenty-five years ago, Nafziger founded the Shenandoah Valley Bach Festival, an annual event hosted by EMU that draws musicians and listeners from around the country. The silver anniversary event, previewed here, is June 11-18.

Many musicians return year after year. In a 2014 Crossroads magazine article, musician Sandra Gerster shared sentiments that have commonly expressed since about working with Nafziger. She has joined the festival from her home in Baltimore, Maryland, since 1983.

“I come back every year because the trust, respect and integrity that Ken Nafziger brings to the festival is unsurpassed,” she says.”He cultivates a safe environment where we are encouraged to take artistic risks, to try to perform something in a new way, where the musical process is valued and where the performances are truly expressions of emotion, not plastic displays of static perfectionism. I return because my colleagues have become my family, and I am constantly inspired, awestruck, heartened and buoyed by them.”

For his varied endeavors, including leadership of the independent chamber ensemble Winchester Musica Vivica, Nafziger was awarded the 2015 Circle of Excellence in the Arts Award. The honor recognizes “outstanding accomplishments and sustained contributions in the arts, improving the cultural vitality of the Shenandoah Valley.” The award was given by the Forbes Center for the Performing Arts, the Valley Arts Council, and the College of Visual and Performing Arts at James Madison University. 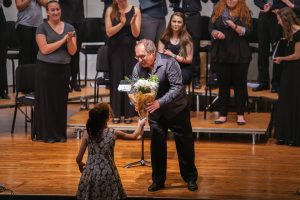 Professor Ken J. Nafziger accepts flowers and a standing ovation at the conclusion of the spring Chamber Singers concert. (Photo by Joaquin Sosa)

In church music, Nafziger’s influence has been both national and international in scope. He was the music editor of Hymnal: A Worship Book, popularly known as the “blue hymnal,” published in 1992, used in Mennonite churches across the United States, and assistant editor to two auxiliary Mennonite hymnals, Sing the Story and Sing the Journey.

Nafziger’s unique way of creating community through music was noted by several speakers at the reception, including colleague James Richardson.

Richardson recalled being asked, while a high school student in the Eastern Mennonite High School choir, to drop down an octave and hit an “ungodly note meant for an Russian basso profundo but I remember being able to hit that note and his thumbs up, which made my day. Some of you know that thumbs up.”

Read on for more memories of Professor Ken J. Nafziger, shared by former students and colleagues, and share your own in the comment box at the end of this article.

As many of you may already know, Ken J. Nafziger is retiring at the end of this academic year after more than 40 years and innumerable lives transformed here at EMU. Yesterday, over 50 Chamber Singers from each of those decades reminisced about our experiences singing under his direction. The responses ranged from the humorous to the sacred and more than a little of both. One person recounted a program error that stated, without any punctuation that the next song would be “Under the shadow of the almighty conductor Ken Nafziger.” Another told of a moment of transcendence, weeping as the music we made together washed over him.

And by the end we had all graduated in the same year.

That time of sharing could have gone on the rest of the day, but we couldn’t very well all be together in one place and not sing. The next song we’ll be singing is Dona Nobis Pacem by Johann Sebastian Bach and while it wasn’t sung every year, it has particular themes and threads that link Chambers Singers from 1977 to 2017.

Just as Bach transformed the world with his music, so to has Ken in this space, in this time, in this community. Ken and Helen, Dona Nobis Pacem translates to Grant Us Peace and from all of your Chamber Singers past and present we wish you both peace in this next chapter of your lives.

Story By Lauren Jefferson Posted on June 22, 2017
Share
Grad School Q & A: Malerie Plank ’07, pursuing a Doctorate of Nursing Practice at University of Iowa »
« Weather Vane’s ‘2016-17 Year In Review’ disappears from the racks: here’s a digital issue in case you missed it!