Isabel Castillo was recognized as a “Movement Honoree” by Sojourners at its June 2017 Healing and Resistance Summit at Gallaudet University in Washington, D.C. Castillo earned a degree in social work in 2007 and a master's degree in conflict transformation in 2017 from Eastern Mennonite University. (J.P. Keenan/Sojourners)

When Eastern Mennonite University (EMU) graduate Isabel Castillo was recognized as a “Movement Honoree” by Sojourners at its June 2017 Healing and Resistance Summit at Gallaudet University in Washington D.C., she called on advocates to raise up voices like her own — one that is typically marginalized.

Castillo, who was brought into the United States from Mexico when she was six, has spoken publicly about her own undocumented status since she was a student at Turner Ashby High School. Her advocacy has been nationally recognized. 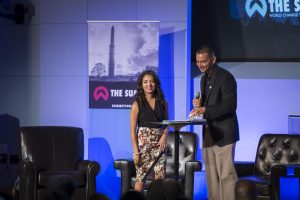 Isabel Castillo with Adam Taylor, chair of the Sojourners Board of Directors. (J.P. Keenan/Sojourners)

Castillo graduated with a social work degree from EMU in 2007, and in 2017, earned a master’s degree in conflict transformation from EMU’s Center for Justice and Peacebuilding.

More than 300 “leaders committed to changing the world through faith and justice” attended the Summit organized annually since 2014 by Sojourners. A leading voice of progressive Christianity, Sojourners promotes “the biblical call to social justice” through its magazine and digital forum.

Adam Taylor, chair of the Sojourners Board of Directors, presented Castillo with one of four Movement Honoree awards granted for “exceptional efforts” that “help to sustain our collective desire for a more equitable and peaceful world,” notably organizing a march on Washington and staging a sit-in at former Senate Majority Leader Harry Reid’s office. Since 2013, she has worked for Virginia Organizing.

In her acceptance speech, Castillo said that “Jesus hung out with the ‘marginalized,’ the ‘least of these.’ He heard directly from them. And it seems like few decision makers hear the truth directly from those who are directly impacted by the many injustices we face in our nation, in our world.”

Advocates, she said, should “be space-holders, walk alongside or behind those directly impacted by the many systems of oppression and allow them to share their stories and their truth.”

Castillo has addressed oppression by sharing her own story. Her daring exchange about the DREAM Act at a 2010 Harrisonburg town hall meeting with then-governor of Virginia Bob McDonnell was detailed in a New York Times article. She has also been featured in The Atlantic and on Public Radio International’s Bob Edwards Weekend. 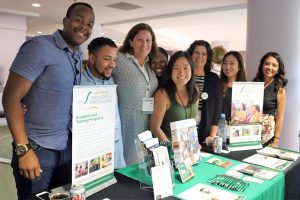 In 2011, the University of San Francisco awarded her an honorary doctorate “for her selfless courage in advancing the cause of undocumented college students.”

“We’ve followed and admired Isabel’s witness and work since she confronted Governor McDonnell on his opposition to the DREAM Act several years ago,” said Michael Mershon, director of communications for Sojourners. “There’s a level of strength and courage in what she brings to the movement for social justice that’s impossible to ignore.”

EMU and Sojourners enjoy substantial connection with each other, he added.

“We also have staff who are alums of EMU and we have a long and strong relationship with the university and the broader Mennonite community,” Mershon said, “so we always welcome the opportunity to lift up the stories of people shaped by that experience. Technically, we honored Isabel at our Summit, but in truth the honor was all ours.”