Friday afternoon’s Presidential Forum at Eastern Mennonite University’s MainStage Theater offered a rare opportunity to hear from four leaders: three who have led the institution through major cultural and curricular change, and a fourth whose current leadership symbolizes a new beginning and new challenges.

“This is one of the events I’ve been looking forward to this weekend,” Donald Kraybill, author of EMU’s new Centennial history, told the gathered crowd at Homecoming and Family Weekend. “We are very fortunate as an institution to have four living presidents. It’s rather remarkable in many ways.” 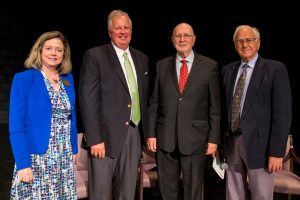 Each president was asked to share a defining moment in their presidency, an achievement or accomplishment, and a prank or humorous story.

The library fund drive of 1969 made Augsburger’s highlight list. The event drove then-Eastern Mennonite College into national view, primarily for the student-led weekend fundraiser that raised $111,000 in four days at a time when many college campuses were places of unrest and dissent.

Students “gathered things from all over the neighborhood” for a Saturday night auction. As the night went on, the amount rose and rose.

“Finally, at quarter to two or two o’clock in the morning, I auctioned off the last thing,” Augsburger remembered. “It was [campus pastor] Truman Brunk’s necktie. I reached over and pulled it off him and that put us over the top.”

In regards to his accomplishment, Augsburger noted the development of the Inter-Disciplinary Studies curriculum, popularly known as IDS, which Kraybill called a rare and “massive transformation” that integrated the Christian faith into the liberal arts. “It proved we were not an educational program with a little religion tacked on the edge like many colleges,” Augsburger said. “We had seven courses, each taught by five professors from five disciplines who modeled integrated Christian faith with each discipline and how they overlapped.”

One of Augsburger’s most embarrassing moments came in his first year as president at EMC when he invited his predecessor John R. Mumaw to speak in chapel. The night before, a drama had been staged and the banner that displayed the college’s motto “Thy Word is Truth” had been temporarily taken down.

Mumaw had not been on campus for many months (shortly after marrying Evelyn King, former dean of women, they had traveled on a lengthy worldwide tour). Upon arriving at the pulpit, his first comment was “I see that since I’m no longer president, the college has removed the motto ‘Thy Word is Truth.’” 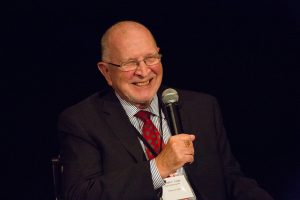 Joe Lapp, a 1966 graduate of Eastern Mennonite College and an attorney by profession, came to his presidency after 13 years on the board of trustees.

Lapp came to presidency after serving 13 years on the board of trustees. He arrived at a difficult time, he remembered, with challenges related to enrollment, revenue and campus morale. “Soon after I was appointed, one of my attorney friends said, ‘Why would you leave a good practice and join a sinking ship?’”

An enrollment boost helped both revenue and morale, as did entrepreneurial development of programs that became new revenue sources, such as the Adult Degree Completion Program, the Intensive English Program, and the seminary’s Clinical Pastoral Education program. This era also saw the founding of successful graduate programs, including the Center for Justice and Peacebuilding and the Masters in Counseling program.

“I thought I needed to be an encourager of new ideas,” he said.

His leadership in changing the name from Eastern Mennonite College (EMC) to Eastern Mennonite University (EMU) led to many tongue-in-cheek gifts: “I received a collection of wonderful things to celebrate emus from around the world, like a pack of emu cigarettes for Central America, emu wine, emu jerky…”

Lapp was also the only president to sport hair below his collar. It grew long during a cross-cultural trip to the Middle East and he decided not to cut it because “it was more fun aggravating people.” Eventually he pulled it into a ponytail and cut it off, after the YPCA made it into a fundraising event. 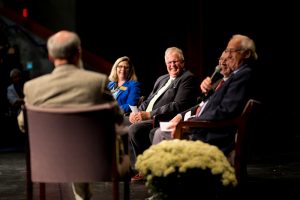 President from 2003 to 2016, Swartzendruber recalled that “issues of sexuality were absolutely the number one challenge that I dealt with from the beginning, starting with a demonstration on campus one week after my inauguration. … That became a 13-year-long conversation, as it has been in the church.”

Accomplishments included EMU’s ground-breaking solar installation on the roof of the Hartzler Library and attendance with alumna Leymah Gbowee at the Nobel Peace Prize ceremony.

As for pranks, Swartzendruber brought with him a photocopy of an April 2004 issue of the Feather Brain with the headline “Cops bust party at presidential residence.” He speculated that M.J. Sharp, posthumous recipient of the Distinguished Life Service Award during the weekend, may have had a hand in the writing of the article, though as is tradition with the “prank” newspaper, no writers’ names were included.

Swartzendruber also noted the infamous episode during which a student fell while trying to move the 250-pound taxidermied bison into the third story of Oakwood. “This was a generational prankster family, so when I went to visit the student in the hospital, I told him, ‘I’ve heard stories about your grandfather, I know your dad, and before you have kids at EMU, I am out of here.”

Nine months into her tenure as EMU’s ninth president, Huxman opted to ask each of her predecessors two questions.

She was curious about the joys of the position. “You’re never not a president,” she said. “But still with the pressures of the position, the Chronicle of Higher Education reports that 89 percent of all college presidents report having huge job satisfaction, even if they served a short tenure.”

Swartzendruber said his particular joy “always had to do with students;” whether in art, theater or athletics, he enjoyed “seeing student accomplishments and then following them as graduates, as alumni.”

Lapp remembered one special day when the university was awarded a large grant, affirming the university’s influence and the expertise of its faculty.

Augsburger noted teamwork: “working with faculty who were my peers, not only to have their support, criticisms and counsel.”

Huxman also asked the group for recommendations for caring for and empowering spouses. She pointed out her husband Jesse in the audience, and praised Kraybill for giving spouses equal attention in the Centennial history: “Pat, Hannah and Esther are not just footnotes in your book,” she said, referring to Pat Swartzendruber, Hannah Lapp and Esther Augsburger.

From the audience, the presidents fielded questions about the early Bible college curriculum, the need for and value of accreditation, shifts within the liberal arts curriculum and growth of professional studies programs, as well as the college-to-university name change.

Audience member Mary Ellen Witmer, who worked in the alumni/development office for many years, prompted the sharing by Lapp of a few major events during the time of President Richard Detweiler (1980-87), specifically the loss through fire of the Administration Building. “That was particularly devastating to Richard,” Lapp said, remembering that his predecessor felt deeply the loss of the landmark structure that was then under renovation.