In the fall, a few area high school basketball championships are contested at Eastern Mennonite University’s Yoder Arena. Usually, though, university mascot Herm, a giant blue lion, and the pep band don’t join in the fun, nor does the men’s basketball team help each team with their warm-ups.

That was the scene on Wednesday, Oct. 19, as the university’s Director of Athletics Dave King added one more local championship to the Yoder Arena schedule, enlisting the EMU community to join fans and players of area high schools for the Rockingham County Unified Basketball League championships. 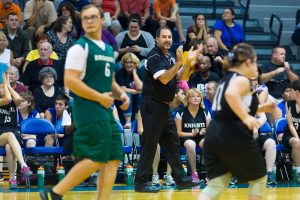 Jerry Arbogast, a special education and career technologies teacher at Turner Ashby High School, coaches the Knights unified basketball team, which plays in a league against other Rockingham County Schools.

Woodrum, now in his first year of retirement, says this kind of basketball isn’t a new concept. He first saw it played in another state and recognized the way the league brought the community together.

He also was reminded of the many special education students who had acted as managers for the varsity boys’ basketball team, which he coached for 18 years. “They loved the game and were always shooting the ball whenever they had a chance,” he remembered.

Woodrum says the league is very different from Special Olympics, which provides unaffiliated athletic opportunities for area athletes. “We wanted this league to look like other athletics at their schools, and we wanted these athletes to experience the same thing other high school athletes do,” he said.

He laid the groundwork among county schools in 2014, securing partners and donors with the help of Troyer and Arbogast. The first season was in 2015. 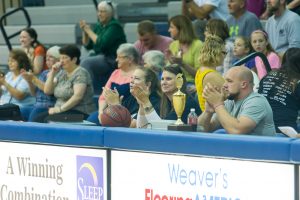 “In the 24 years that I’ve taught, this has been the best thing I’ve been involved in by far,” said Troyer, who coaches the TA girls’ varsity volleyball team. She encourages her players to come to league games, and she said it was meaningful to see the EMU teams in attendance at the championships.

Anyone watching the games Wednesday evening could tell it was more than just a basketball game. “The team doesn’t care about the score. They feel they are a part of something very special for the first time in their high school career. We win every time we step out onto the court,” said Arbogast.

His coaching philosophy is to give each athlete the same amount of playing time. The players want everyone to score a basket each game. Everyone on the court plays by these rules; it’s not uncommon to see opponents handing the ball over for someone to make a basket.

Being involved in sports has transformed the lives of the players and spectators. Arbogast tells the story of a student who for two years never spoke. “I honestly felt that he couldn’t speak. That all changed one day in practice when after he felt accepted by his peers in the school,” said Arbogast. After that, the student began giving directions during games and even now carries on conversation with anyone.

The Knights practice a few times a week during the school day. Arbogast pulls players out of the adapted PE class, and the team runs through their offensive and defensive plays during scrimmages. They also practice subbing in and out just like a real game.

While the leaders of Unified want to teach players that a team can’t win every game, ultimately the score does not matter. “Each athlete plays with such heart and enthusiasm and exhibits such a sense of team that everyone goes home a better person because of what they witnessed that night at the game,” said Troyer. “Unified Basketball has provided a great opportunity for the players, but I honestly think those who attend the games as spectators take home much more.”

“This is sports in its purest form,” says Woodrum from his vantage point on the sidelines between games. After 28 years in high school athletics, he of all people would know what that means.