Since 1958, The Phoenix has showcased poetry, prose, photographs and illustrations from the EMU community. The release party for the spring 2017 issue is Friday, April 21, at 8 p.m. in Common Grounds. Editors Justine Nolt (left) and Lauren Eckenroad discuss selections in the background. (Photos by Andrew Strack)

When Justine Nolt visited campus as a high school student, she picked up a copy of The Phoenix, Eastern Mennonite University’s literary and visual arts journal.

“I remember knowing I wanted to have a hand in its creation during my time here,” said the junior Writing Studies major.

Little did she know, her editorial debut would be the journal’s 60th edition. The editing process for this spring’s journal was both harder—and easier—than she anticipated.

“Usually a poem or picture would ask to be included and we couldn’t say, ‘No,’” she said with a smile. 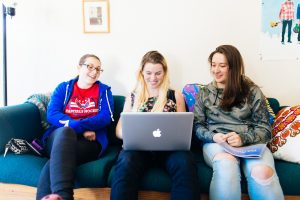 View past issues of The Phoenix.

Since 1958, The Phoenix has showcased poetry, prose, photographs and illustrations from the EMU community once a year. Now, the journal’s biannual release is accompanied by a new class that offers a credit hour for 40 hours of Phoenix work.

The release party for this semester’s issue is Friday, April 21, at 8 p.m. in Common Grounds.

Submissions invited from all on campus

In February, Nolt and Sawyer send an appealing email to the entire campus: “Let the writer or photographer in you shine through, even if you’re up to your eyeballs in nursing clinicals, chemistry labs, dismantling capitalism, accounting spreadsheets, case studies, or restorative justice … It’s gonna be #lit.”

With guidance from faculty advisor Kevin Seidel, the team selected then submissions through discussion and debate – after delving into a lengthy reading list. 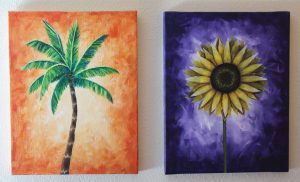 “Home, Parts I and 2,” by Nicole Litwiller, featured artist.

“The hardest part was trying to limit the number of Middle East poems, and then putting a bunch of them in anyway because they were great,” says Nolt.

Weaver and Nolt hope their readership forges an emotional connection to the selected pieces and the students who produced them.

Says Nolt, “I would love for someone to go up to Liesl Graber or Macson McGuigan or Azariah Cox and say, ‘Hey, I saw your work in the Phoenix! I’d love to hear the story behind it.’”

“I’ve loved reading the different poetry that my peers have created,” says Sawyer. “It gives me insight into who they are and what they appreciate in a way that a normal conversation can’t always do.” 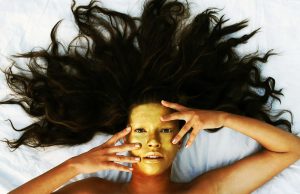 “Ouro” by Ariel Barbosa is among the featured photographs in The Phoenix.