Longtime Snack Shoppe manager Helen Ours still works in the Eastern Mennonite University Dining Hall and treasures her relationships with students. Here she is with Travis Clower, head basketball coach Kirby Dean '86, Jonae Guest and Christian Taylor. Dean has fond memories of eating there after basketball practice, "the closest thing to going home," he said. (Photo by Andrew Strack)

Part I recalls the first snack shop, thanks to information provided by Janet Weaver Yoder whose father launched the enterprise. Now Helen Ours takes up the story.

Say “snack shop “and you’ll conjure a lot of warm memories for alumni of Eastern Mennonite College—and yes, we’ll say EMC because that was the institution’s name when the Snack Shoppe was in its heydey. 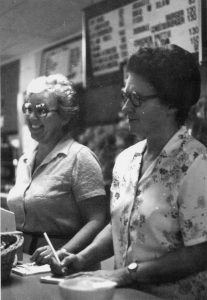 Helen Ours and Lois Shirk in the Snack Shoppe, 1982.

Food has always been an important part of the community experience at EMU. Decades ago, the Snack Shoppe – as it was spelled on the north entrance sign where many enjoyed a large swing set before entering – was a central gathering place for food and more.

“There wasn’t a 7-11 on the corner, so this is where you came,” says Helen Ours, manager from 1974 through the mid-1990s. “It was one place where boys and girls could be together too,” she notes with a smile.

It was more than the food, however, that drew people in. Ours and her co-workers created a place that felt like home. The warm greeting by name, remembering people’s favorite foods, the hospitality and ambiance – yes, ambiance – were key.

“Those booths made the place,” remembered Ted Swartz ’89, MA ’92, in a recent conversation about campus past and present. “It felt like a 1950s soda shop or something…intimate, cozy, friendly. A lot of important things happened there – socializing, strategizing, studying … just what I’d call ‘community.’” 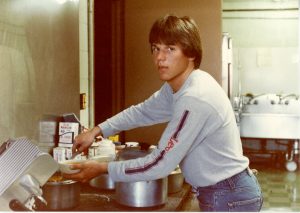 “I remember going to the Snack Shop after chapel and checking my mailbox next to the bookstore [all in the lower level of the same building] and then heading for my coffee and cheese danish or funny cake [a pie with a white cake topping and gooey chocolate bottom layer] courtesy of Helen,” recalls Joani Schweitzer Miller ’87. “It was a favorite study and conversation spot.”

Ours employed as many as 37 work-study students per semester, covering shifts from 7:30 a.m. to 11 p.m. most days. Delbert Wenger ’86 and his sister Donna Wenger Widrick ’90 are one of several sets of siblings who worked for Ours during her tenure.

Helen probably remembers every student who worked for her, says Delbert Wenger. “She’d also probably remember all those athletes who often ‘subsidized’ their hunger after dining hall suppers with something good from the menu. Steak sandwiches were a popular item for hungry athletes,” he remembers. 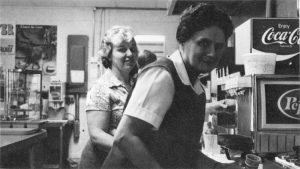 Another view of the cozy shop, with Helen and Lois.

“Going to the snack shop after basketball practice back in the late ‘80s was the closest thing most of the guys could do that felt like home,” recalls Kirby Dean ‘92 and head men’s basketball coach at EMU since 2002.  “The biggest part of that is that Helen treated all of us like we were her own sons.”

Wenger also recalls the trust Ours put in the students by giving them building keys and training them to open, close and run the business.

“It was a great atmosphere. Helen was a mother as much as a supervisor to all of us. I think we all loved going to work,” says Widrick.

Ours, who now works in the EMU dining hall, says she actually began her career in food service in the campus snack shop, but located in a different place on Mount Clinton Pike.

Ours worked there from 1948 through the spring of 1950, under manager by Lydia Slabaugh Martin.

Ours no longer worked at the college, but she occasionally saw President Myron Augsburger at high school athletic events (their children were the same age and attended Eastern Mennonite High School). 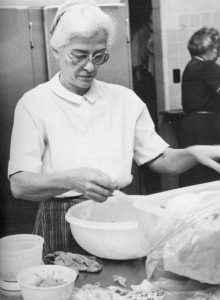 Augsburger’s regular request to Ours: Bring your cooking and managerial skills to the Snack Shop.

Ours obliged in 1974. She worked first with Doris Miller. Together they added more food to the menu and spruced up the shop with new window coverings and dining ware.

Within a year, Vera Kuhns and Margaret Kauffman, both of whom had husbands working in the physical plant, joined her staff.

Today’s students go to the Royals’ Den in the University Commons to grab a quick grilled sandwich, salad or drink. Many pre-1996 alumni who work on campus still call it the “snack shop.”

The “Den” atmosphere is different and the snack shop era is passed. Thanks to Helen Ours and her colleagues, however, many friendships were deepened, problems were solved, and souls fed through the hospitality and home-like comfort she cooked up in the Snack Shop during its glory days.

But in her role today with the EMU dining hall, Helen remains a beloved community member, greeting students by name and sometimes with a hug. She is special to athletic team members in particular. She and her husband support them by attending every game or match they can get to.

“I enjoy watching Helen interact with my basketball players now,” says Dean. “It reminds me so much of how she treated me when I was a player hanging out in the snack shop. There is a special relationship that develops there … food, hospitality, genuine care. It is hard to explain, but you know it when you see it. And it doesn’t seem to change with time.”