John Horst poses next to the historical panels he helped create in the gym foyer at Eastern Mennonite University. He's also created panels that are displayed in three other locations. Horst taught physics, mathematics and interdisciplinary studies at EMU for 37 years. (Photos by Joaquin Sosa)

Walking around the Eastern Mennonite University campus with Horst is like walking through the pages of a yearbook. He knows every nook and cranny, important moments, the stories, and the stories behind the stories. 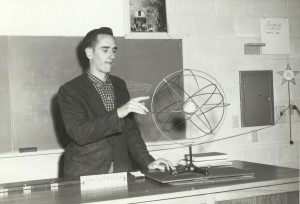 Professor John Horst began his teaching career at Eastern Mennonite High School, but soon returned to his alma mater to teach for 37 years. His doctorate is from University of Virginia. (EMU Archives)

This is not surprising, since Horst spent more than 40 years on campus: four as a student, three as a teacher at Eastern Mennonite High School, and 37 as a physics, mathematics and interdisciplinary studies professor. He was also planetarium director. Those 37 years were interrupted only by a four-year stint to complete his graduate studies at the University of Virginia. Even now, in retirement as faculty emeritus, he and his wife, Joan, live across the street from the campus.

Horst enjoys talking about the school’s history, but he has a particular passion for showing it. He has helped to create several panels, on display at four campus locations, each one giving a glimpse into EMU’s history.

“I call it history on a wall instead of history in a book,” he says. “For a nice panel, you must have something interesting to see, and then you go from there.”

A set of four panels in the University Commons, for example, provides a history of EMU’s athletics program from 1917 to 1977—from competing “literary societies” to the start of varsity teams and the days when EMC teams were known as the Courtiers to big basketball matchups against much larger crosstown rival James Madison University.

Photos show students doing “physical fitness” by helping to build a wing of the Administration Building and another historic gem: Ernest G. Gehman pole-vaulting in front of the Ad Building in 1922*.

Horst points at one particular photo and smiles. 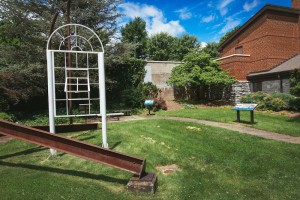 The Anna Frey Memorial Garden adjacent to the Campus Center.

Athletics director Dave King commissioned the display to celebrate the first 60 years of athletics at EMU. Horst wrote the text and gathered photos for the panels and worked with designers and others on campus to bring the display to life.

One panel is about Frey, a 1951 graduate who taught in a number of church schools before coming to EMC in 1967. A popular teacher, she taught English for more than 16 years until her death by a stroke at the end of the spring semester in 1983.

Another shares some history of the Administration Building itself, including the fire. One photo shows M.T. Brackbill’s chaotic physics classroom, located in the original building, where Horst vividly remembers taking a class.

“M.T. Brackbill was the original astronomer (at EMU),” Horst recalls. “He was one of a kind. He would just rig up everything.”

Horst laments that the sun and dust and other weather take their toll on the outdoor panels, which periodically need cleaning, but he likes the location. The garden is framed with a sculpture by Jerry Lapp, former associate professor of art, which combines pipes, I-beams and a library window salvaged from the original Administration Building. The panel says the sculpture, titled “Reader’s Guide to an Open Window,” is “a monument to destruction and resurrection.” 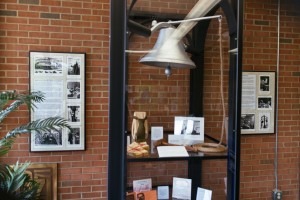 The bell that rang during the library fund drive resides, fittingly, in the Sadie Hartzler Library.

Horst says he enjoys sitting within the sculpture, resting on a horizontal I-beam.

“It gives the feel like you’re sitting in a cathedral,” he says.

Down the hill a short walk away in Hartzler Library, two panels in the lobby describe the “miraculous fund drive” of 1970 that enabled construction of the new library. The “Unity Bell” that rang during the fundraising and other documents and artifacts can be seen in a display case between the two panels. The display was created by a committee formed to mark the 40th anniversary of the fund drive in 2009.

“There are so many interesting things,” Horst says, pointing out a wooden gavel used during the drive. “We were trying to get some interesting stories.”

he Suter Science Center, where Horst once taught physics, mathematics and interdisciplinary studies humanities, contains his fourth history project. A panel near the main entrance provides some history of EMU’s former M.T. Brackbill Planetarium, which Horst once oversaw. He says it contained one of the original Spitz planetarium projection systems.

On the lower level, a wall displays a rare and colorful old physics chart from the 1930s—a “valuable artifact,” Horst says. He found it in storage and repaired and restored it in 2008 with help from local craftsman Raymond Shank, who also framed it. Horst wrote a small narrative about the chart, which shows the electromagnetic spectrum and explains all manner of visible and invisible light waves.

“There’s never been a chart quite like this,” Horst says. “And I think Brackbill bought it for $10 back in the late ‘30s.”

That’s an appropriate place to end the tour, because when Horst isn’t creating panels, he uses some of those waves—radio waves—to share another sort of history. An avid musician and singer, he hosts the show “Mostly Mennonite, Mostly A Cappella” Sunday morning from 8-9:30 a.m. with an encore Wednesday evenings at 8 p.m. on WEMC 91.7.

[note]Editor’s note: The photo of Ernest G. Gehman at the height of his jump is surely one of the earliest photos of pole vaulting in the United States, a safe deduction from the interest expressed by the “unofficial” pole vault historian in the United States, Coach David Butler, of Rice University, who asked for a copy after finding it online.[/note]