Mike Martin, a 2000 graduate of Eastern Mennonite University, opened Next Level’s current facility in Harrisonburg in 2012, and he now trains between 50-60 clients — with high school athletes accounting for a high percentage of them. (Photos by Macson McGuigan)

Looking for an extra training boost to propel him into a college baseball prospect, Dofflemyer saw how other high school athletes thrived as pupils of Mike Martin ’00 at Next Level Athletic Development.

“When he got a couple of these good athletes around the area to start working out with him and you see them succeed, that’s what kind of drew me to him,” said Dofflemyer, a recent Spotswood graduate. “These guys are obviously talented, but he’s kind of taken them to that point where they’re really doing well and I wanted to see if he could do anything with me.” 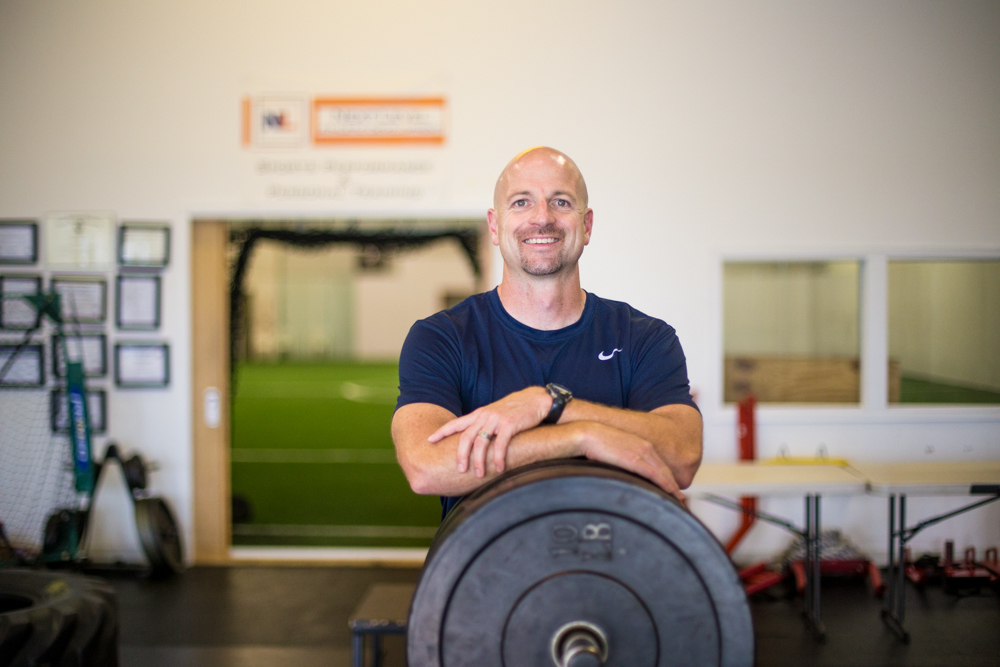 Now, like plenty of Martin’s clients, Dofflemyer is on his way to being a college athlete.

Martin, 40, opened Next Level’s current facility in Harrisonburg in 2012, and he now trains between 50-60 clients — with high school athletes accounting for a high percentage of them.

A decent amount of them, too, are standout athletes heading to play in college.

Martin doesn’t pretend he’s the only reason for that, however.

“The athletes we train and the level that some of them are able to go and play at, that certainly is beyond what I would’ve thought,” said Martin, a 1995 Eastern Mennonite High School grad and former Eastern Mennonite University soccer player. “The kids that are reaching the levels they are, they’re already highly skilled. It’s just the fact they’re putting time in for offseason training and that’s just a part of their work ethic that they already had.

“If we can take what we know, which is sports performance, we can possibly help a kid improve a little bit so they can reach the goal that they want. That’s where you see the reward. When you see them make an improvement or when they get excited about an offer that they got or they ran a 60 and their time dropped a tenth or two-tenths and they’re excited about that, that kind of stuff right there, that’s what makes it fun.”

The goals of Martin’s trainees vary; some want to play Division I, some aim to simply play in college, and some just want to make a high school team. 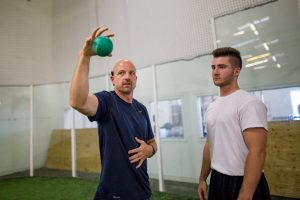 Accordingly, he develops plans specific to the athletes.

“Everything we do is individualized. That’s number one, because every kid is different,” said Martin, a former Spotswood and EMHS soccer coach and Rockingham County physical education teacher. “There’s definitely overlap because there’s fundamental movement patterns and fundamental qualities that we want every athlete to be at — every young athlete, especially, regardless of gender, regardless of the sport. Then as they get farther along or more specialized, we’ll become higher-level in their sport.”

That specialization is something high school programs can’t always offer, while college programs feature their own strength and conditioning staff members.

“We don’t have that, so he’s brought that specialty area to all the local high schools and colleges, as well,” said Bobby Mongold, the Broadway girls basketball and girls soccer coach. “It’s nice to have someone who has a knowledge base about that. I mean, I can go on the internet and I can look stuff up, but I’m not an expert on that.

“So if I see an exercise or something I like on the internet, I don’t just plug it into our system. I get in touch with Mike or someone else — but a lot of times Mike, because I trust him.”

Mongold, whose soccer program had close to 40 players involved this past spring, isn’t often able to design workout plans specifically for each athlete. 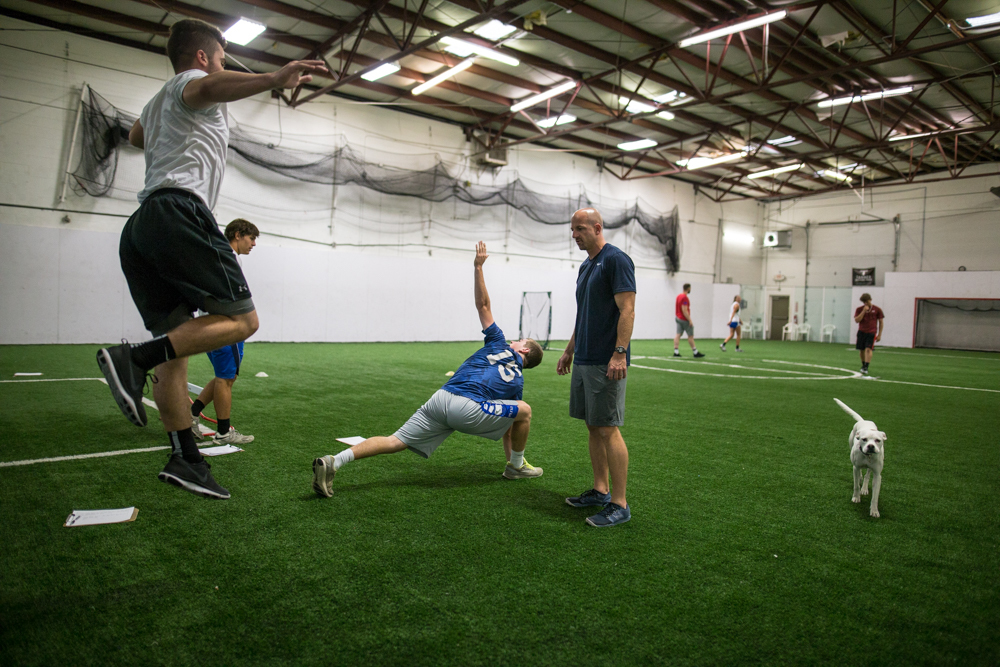 The Next Level Athletic Development facility hosts sports performance and physical training activities, as well as an indoor soccer league.

Mongold added that Martin is highly personable and “very open” about his training system. The BHS coach said Martin also does a “great job” of assessing players, finding their needs and building a program for them, and also connecting with the athletes, especially through social media.

It’s “really helpful,” Martin said, to be on the same page as high school coaches because they see the players in an athletic setting every day and can help find weaknesses.

Conversely, Mongold goes to Martin for advice on how he can supplement what the Next Level owner works on and also how to prevent injuries, particularly with the ACL.

“We’re trying to do everything we can to prevent those things and Mike has been my go-to in that category,” Mongold said.

Dofflemyer, a D-II King University baseball signee, began training with Martin at the end of his junior year, and he’s since undergone a “significantly” noticeable change in velocity as a pitcher.

He’s also become a better hitter, and he said Martin has a great feel for how baseball players can get more use out of their legs.

“Every single time I leave, I always feel like I got better or I feel more motivated when I go train with him,” Dofflemyer said. “I feel a lot more comfortable in there, too. I go out there and I’m feeling more confident with what my body can do, and then on the baseball field, it’s kind of helped me.”

The former three-sport athlete at Spotswood added that it’s been “pretty cool” to interact with athletes from other schools that also train with Martin at Next Level.

“[Martin] definitely holds you accountable for everything you do,” said recent Turner Ashby graduate Cana Davis, a Virginia Tech softball signee. “If you’re ever in the corner trying to slack off, ‘Hey, Cana, stop talking.’ He always has to tell me that because we all know each other.

“He works you hard and the stuff that he teaches, he’s very fundamental and making sure that before you do a lift, you’re going to do the lift 100 percent correct.”

Training players from multiple schools has forced Martin to sometimes be a neutral spectator when he watches games, but he said it’s also fostered a fun atmosphere at Next Level because players from rivaling schools tend to know one another.

“But it’s also some competitive stuff because they don’t really want a kid from another school that plays their same sport to out-work them or get stronger than them,” Martin said. “It does lead to better competition and a heightened competitiveness during the training session, which I also find helpful for the kids.”

The ultimate goal for Next Level, Martin said, was to be able to provide for his family, which includes his wife, Danielle, and their four young children. But he’s also aimed to develop relationships with the athletes, in addition to teaching them more about how to care for their bodies off the field in areas such as sleep and nutrition.

And while plenty of standout athletes have come through Next Level, more are on the way, Martin promises.

“It’s been a blessing, some of the athletes that we’ve been able to train that’ve come through our doors and that are still there that maybe some people don’t know about yet or are just getting started,” Martin said. “There’s going to be some pretty high-level athletes coming through this area in a couple of years that people are going to start hearing about. It’s definitely beyond what I was expecting.”

This article was published in the July 24, 2017, Daily News-Record.