‘Welcome Your Neighbor’ sign continues to spread around the nation, to the delight of its creators at Immanuel Mennonite Church

The Immanuel Mennonite Church "sign team" of (from left) Jerry Holsopple, Melissa Howard, Betsy Dintaman and Pastor Matthew Bucher have teamed up to handle the demand of their popular signs that voice support and hospitality for immigrants and refugees. The signs read, "No matter where you're from, we're glad you're our neighbor" in three languages. (Photo by Andrew Strack)

From Washington D.C. to Colorado, demand for Immanuel Mennonite Church’s “Welcome Your Neighbor” sign has skyrocketed. The sign, with a distinctive tri-color banding, reads in three languages: No matter where you’re from, we’re glad you’re our neighbor.

Since first posted in front of the Harrisonburg, Virginia, church in September 2015, a flood of attention from supportive citizens to interested media outlets, spurred on by social media posts, has created a new demand for Pastor Matthew Bucher and his congregation. [Bucher is a 2015 graduate of Eastern Mennonite Seminary and the Center for Justice and Peacebuilding.]

From the beginning, Bucher says it’s been a team effort—from the sign’s conception to the first printing, early dissemination and now, handling queries from people across the country. And they’ve been aided by a growing network of fans, some Mennonite and many others not, who believe strongly in the equity and hospitality embodied in the sign’s message. 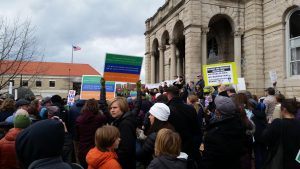 Ready-made protest signs: “We just took our sign out of our yard on the way to the rally,” said one participant at a Jan. 28 rally for immigrants and refugees in Harrisonburg, Virginia. (Photo by Lauren Jefferson)

“For us, philosophically, we don’t see the need to own stuff,” says sign designer Jerry Holsopple, a professor in the Visual and Communication Arts Department at EMU. “We definitely don’t own God.”

Lost in some of the media re-tellings has been the spirit of collaboration, not just between individuals but also between organizations.

So let’s set the story straight:

In 2015, the sign idea was born: English, Spanish and Arabic representing the most common languages in the Immanuel neighborhood. Bucher, fluent in Arabic after spending four years in Egypt with Mennonite Central Committee, asked Melissa Howard to paint the original sign in front of the church, located in a historically black, now multicultural neighborhood in Harrisonburg.

Bucher then brought the idea to the Mission Advisory Commission – Jennifer Davis Sensenig, Ben Risser ’85 and Nick Meyer ‘08 – a small group of the Harrisonburg District Mennonite Pastors organization. This group wanted to produce a yard sign, and Meyer, pastor of Early Church, and his friend Alex Gore created the first digital version, turning to Holsopple for help formatting the Arabic.

Holsopple then took over the design and printed an initial order to sell, alongside the church’s tamales, at the Sept. 30-Oct. 1 Virginia Mennonite Relief Sale in Harrisonburg, an event which draws hundreds of people from the region and out of state.

“Early on, we thought we had to get it done and out before the election, because then it would be over,” says congregant Betsy Dintaman. “And the opposite happened.”

“The relief sale really helped it get out of Harrisonburg,” says Holsopple.

As demand grew, the congregation formed a “sign team,” which includes Bucher, Howard, Holsopple, and the trio of Dintaman, with Greta Bucher and Janet Stutzman, handling Facebook questions, comments and requests.

Some of those requests have included substitutions of the Spanish language text with German, Armenian, French and Somali. However, in a political climate in which many are concerned about anti-Muslim harassment, Holsopple says nobody has asked him to swap out the Arabic text, which “says something beyond just their neighborhood.”

Staff members and volunteers with The Roberta Webb Child Care Center , a ministry housed in the church’s lower level, have taken over printing and shipping for the Harrisonburg area. After costs are covered, the remaining proceeds benefit the daycare, as well as Mennonite Central Committee and New Bridges Immigrant Resource Center.

Notably, like the sign, the daycare (started 22 years ago) was an outgrowth of the church’s community-centered values. “It was part of the conversation of how the church was started with the community,” explains Bucher. “There’s a need. How do we respond as new neighbors in the community? That’s been an integral part of the congregation’s identity.”

In the same spirit, rather than try to control dissemination, the team has provided a free PDF file, which can be found on Immanuel’s website.

If mass printings happen, Bucher and his team ask that any proceeds go to an immigrant-focused organization in that community. A dozen organizations across the country have participated in this way, contributing greatly the spread of the sign.

Each day brings some new notice of growth and attention. Recently, it was an editor of “O” magazine, which plans to feature the sign in March.

Still, their goals are simple, says Melissa Howard. “I hope it tones down violence, and just brings out true humane character.”

For his part, Bucher wants the phenomenon of the signs “to remind our congregation to note ways in which we are cared for by our neighbors, and to continue showing God’s love in small ways, as a congregation and as individuals in our communities.”

Read, watch and listen to media coverage of the “Welcome” sign

An incomplete list of “Welcome Sign”-spreaders across the country

Thanks to the efforts of citizens around the continent, including many EMU alumni, the signs have spread to at least 14 states and Canada:

If you’re involved in spreading the “Welcome Your Neighbors” sign around the country (or the world), please let us know by sending us a note in the comment box below.

Story By Lauren JeffersonStory By Randi B. Hagi Posted on January 31, 2017
Share
Ken L. Nafziger honored for his many contributions to EMU »
« EMU’s long-lived Peace Fellowship advocates for the presence of justice on and off campus